How Punk has influenced the couture of Jean-Paul Gaultier

Could there ever be a more consistently exciting designer than Jean-Paul Gaultier? He tears up the Fashion rule book time and time again with his wicked sense of humour which is reflected in his innovative design. He has much in common with his favourite inspiration – punk rock. Both are nonconformist, daring and at times shocking. Gaultier is punk in attitude and spirit. He talks at top speed which reflects the agility of his brilliant mind. At times he talks so quickly I can’t understand what he is saying but I love him so much I don’t care. There is playful wit in combining a Moulin Rouge dancer’s dress with punk tartan fishnets and a mohican. There is trashy energy in a graffiti spattered Teddy boy suit on a slender elegant woman. Gaultier does not dilute the confrontation of punk. Instead, he embraces it and melts it into his own perfect couture aesthetic.

Never has perfection moulded so beautifully with unpolished street gems. Men in skirts? This gender role playfulness is straight out of the deconstructionist nature of punk’s attitude to social norms. When not dabbling with punk Gaultier still cannot resist the desire to shock with sexuality as he famously did with his designs for Madonna. There is an absurd sense of humour that draws from Marcel Duchamp and ‘ready-made’ art in his wonderfully witty ‘teacup’ bra. Gaultier was the presenter of the hit nineties show ‘Eurotrash’ and his love for trash is skilfully imported into his couture. JPG is a genius of the extreme. Who else could have invented the ‘robe sac poubelle’ or trash bag dress? This amazing design even includes a bag made from an ashtray. Gaultier dissolves convention and pretension in his designs. 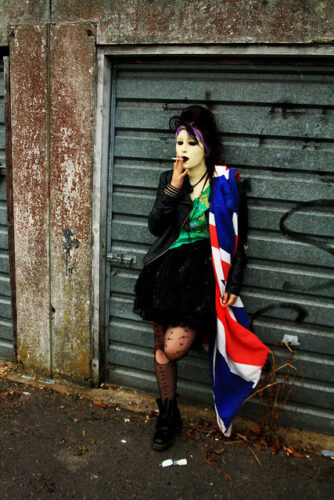 Nobody in fashion history has his ability to mix total trash with beautiful fabrics. Gaultier can throw everything at a design. French and British cultural influence, leather, silk PVC wild sexuality and punk idealism and somehow it works, and becomes exclusively about Gaultier’s world and his artistic vision. Beth Ditto from ‘Gossip’ has also successfully worn his design and both model and designer synchronize their aesthetics of beauty. Ditto is a celebration of a plus-size model who brims over with confidence and sassy attitude as she wears JPG tattoo print on ruched satin. Gaultier makes a point of inclusiveness in his design, all sizes shapes and genders are welcome on his catwalks and even the inclusion of grey Mohicans in one of his punk shows.

Jean-Paul Gaultier has said in interviews that he became a designer to be loved and accepted. Although Gaultier is a French designer London style fans have taken his designs to their hearts, as Gaultier’s unique style reflects a London sensibility and a punk ethos of adopting an eccentric genius as our own.