#Bookclub: ‘Bastard, The Damned, The Lords Of The New Church & More’

‘Bastard, The Damned, The Lords Of The New Church & More’: The Authorised Biography Of Brian James’ Author John Wombat

Brian James is an English punk rock guitarist, who is best known for being a founding member of British punk rock band The Damned as well as the English/American gothic rock band ‘The Lords of the New Church’
This is an informal yet well-researched biography by author John Wombat which effectively showcases the significant contributions by Brian James to British music. The introduction to the book is by the highly respected punk musician and broadcaster Henry Rollins who points out Brian’s incredible fifty-year commitment to the music industry. Brian James is a uniquely talented and sometimes underrated figure who is modest about his extraordinary contributions to the music industry. This is the man who wrote the UK’s first punk song ‘New Rose’ and also the punk classic ‘Neat Neat Neat.’ For committed Damned fans there are also photos of early promotional posters and tickets. There are also ultra fan-related details such as is the first record Brian ever played on: ‘Whitchi Tai To/ Speakin’ My Mind’ The biography also covers well-told Damned related stories here such as how the audition for London SS between Brian James, Tony James and Rat Scabies was conducted with the backdrop of a war film soundtrack. 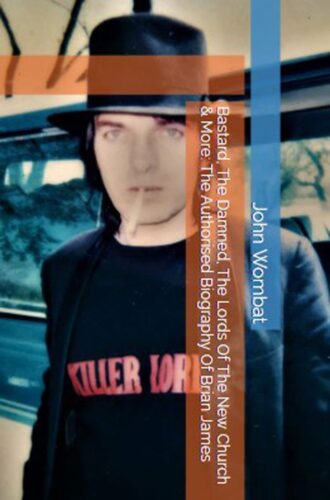 There are other lesser-known punk rock gems in here though, which includes detail on early Brian James bands ‘Bastard’ and an interview with fellow bandmate Yves Kengen. The book also examines how and why Brian broke up the original Damned line up, his surprise tour with Iggy Pop, and behind the scenes moments from ‘The Anarchy’ tour with Johnny Thunders and ‘The Clash.’ There is something here for new and old fans alike. There are many fantastic archive photos taken over the years with Brian’s fellow punk legends Dave Vanian, Captain Sensible and Rat Scabies.
Also included are personal photos taken by his wife Minna Robertson and ‘The Damned’ fans viewpoint of events, as the book also incorporates photographs taken by fans that have followed Brian and ‘The Damned’ for years. These photographs give an informal perspective on the legendary punk history of Brian as an individual artist and ‘The Damned’ as a collective group. The book also gives a great overview of Brian James career from many different perspectives and creates fresh insight for those younger fans who couldn’t be there the first time around while bringing back memories for those fans that were there in the moment.

This biography is a warm and informal tribute to the man who penned the UK’s first punk single ‘New Rose.’ As Brian James himself says:
‘I didn’t do this to be rich and famous. I started off because it’s the only thing I wanted to do in life and it still is.’