Three artists have been shortlisted for the BP Portrait Award 2020, which will open as a virtual exhibition on Tuesday 5 May while the National Portrait Gallery, London is temporarily closed due to the current Coronavirus pandemic.

The three portraits in the running for the £35,000 First Prize are Night Talk by Jiab Prachakul; Portrait of Denis: Actor, Juggler and Fashion Model by , and Labour of Love by Michael Youds. The shortlisted portraits were selected from 1,981 entries from 69 countries. It is the first time any of the artists have been shortlisted for the Award or selected for exhibition.

The prize winners will be announced on Tuesday 5 May on the National Portrait Gallery’s social media channels. All 48 works selected for the BP Portrait Award 2020 exhibition will be shown in a virtual gallery space that replicates the rooms of the National Portrait Gallery, enabling online visitors to view the portraits collectively, read the labels and get insights from the artists, as well as exploring each individual work in more detail. The popular Visitor’s Choice feature, which offers the public the opportunity to vote for their favourite portrait will also run online.

The BP Portrait Award 2020 exhibition was originally due to open at the National Portrait Gallery on the 21 May 2020, but has been postponed following the Gallery’s temporary closure to help prevent the spread of Coronavirus and ensure the safety and wellbeing of visitors and staff. It is not yet known if the exhibition will be able to be shown at the Gallery before building works begin on Inspiring People, the Gallery’s major redevelopment project, at the end of June. The exhibition is set to tour to Aberdeen Art Gallery towards the end of the year and details and dates will be confirmed in due course.

Jiab Prachakul was born in in 1979 in Nakhon Phanom, a small town on the Mekong River in northeast Thailand. She studied filmography at Thammasat University before working as a casting director at a Bangkok production company, finding talent for advertising campaigns. In 2006, Prachakul relocated to London where she had the ‘instant realisation’ that she wanted to be an artist after viewing a David Hockney retrospective at the National Portrait Gallery. Entirely self-taught, she moved to Berlin in 2008 and began selling her pictures at a local flea market and set up an online fashion brand, designing merchandise based on her artworks, which she continues to run from her current home in Lyon. 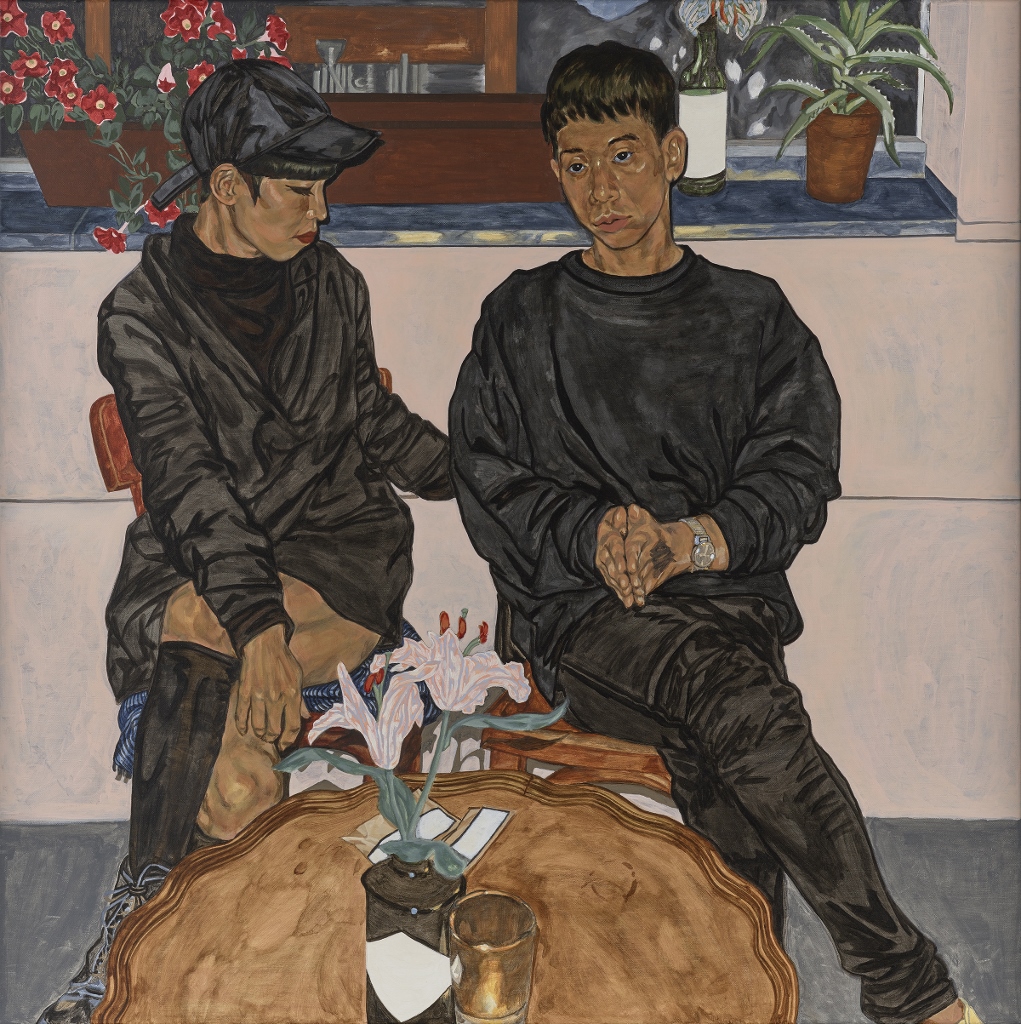 Night Talk portrays Prachakul’s close friends Jeonga Choi, a designer from Korea, and Makoto Sakamoto, a music composer from Japan, who are pictured in a Berlin bar on an autumn evening. The portrait explores notions of individual identity and how perceptions of selfhood can change over time. ‘Our identity is dictated to us from the moment we are born, but as we grow up, identity is what we actually choose to be,’ she says. ‘I do believe that our circle of friends is what makes us who we are. Jeonga and Makoto are like family to me. We are all outsiders, Asian artists living abroad, and their deep friendship has helped me to understand who I am.’

Sergey Svetlakov was born in 1961 in Kazan, the capital city of what is now the Republic of Tatarstan in the Russian Federation. He graduated from the Kazan Art School, one of the oldest in Russia, before studying set design at the Theatre Academy in St Petersburg where he continues to live and work. His early career was spent designing sets and costumes for operas and stage productions. In the early 1990s, he gave up working in theatre to devote all his energies to his portraiture, nude studies and still life, and he has since exhibited widely across Europe, the US and Japan. 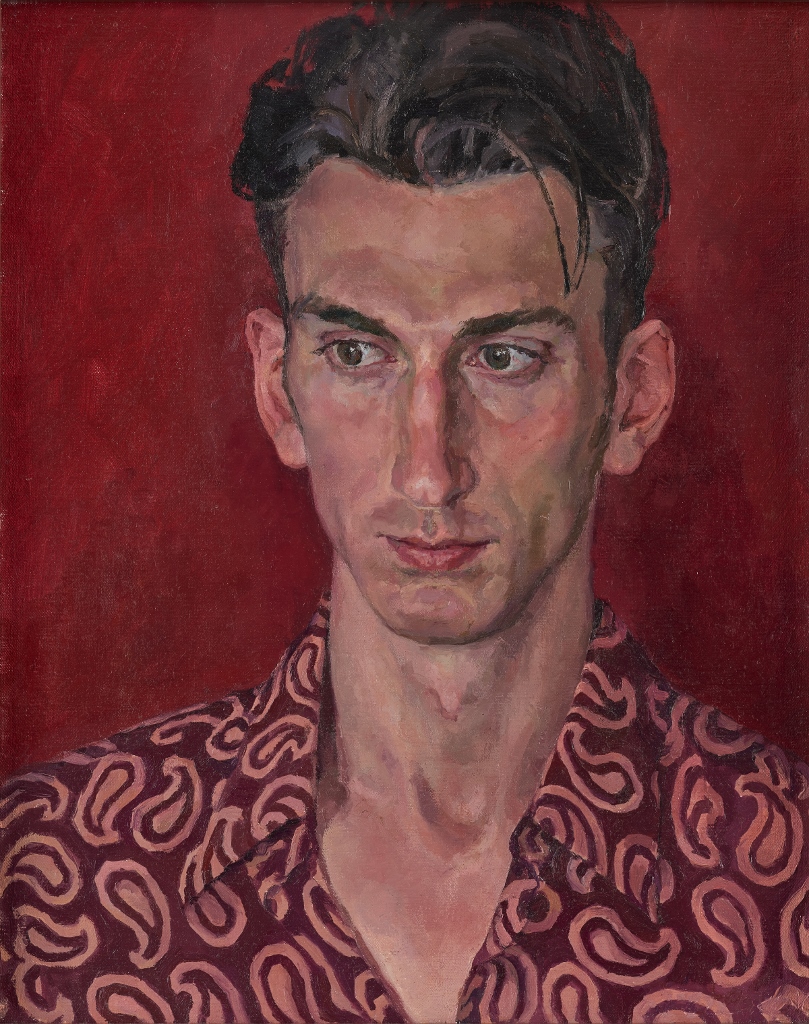 Svetlakov finds many of his sitters on the internet, including Denis, the subject of his entry in the 2020 BP Portrait Award. An aspiring actor, Denis had recently arrived in St Petersburg and placed an advertisement on a social network site offering his services as a model in order to earn extra money. ‘My sitters are usually ordinary people with various types of social backgrounds,’ says Svetlakov. ‘Because Denis is an actor, he is very emotional and his face constantly changes depending on his mood. When I painted him he was desperately searching for work and I found it interesting to convey his intense ambitions and doubts. His face is an explosive fusion of his Ukrainian, Russian, Greek and Tatar genes.’

Born in 1982 in Blackburn, Lancashire, Michael Youds gained a first-class degree in Fine Art from Lancaster University before moving to Edinburgh in 2006. Youds works as a gallery attendant at the National Galleries of Scotland, he is also an award-winning artist in his own right and devotes most of his free time to painting portraits and still life at his studio in the city. His work has been selected for exhibition at the Royal Scottish Academy and the Royal Society of Portrait Painters. In 2019, he won first prize in the Scottish Portrait Awards for a painting of him and his twin brother David, who is also an artist. 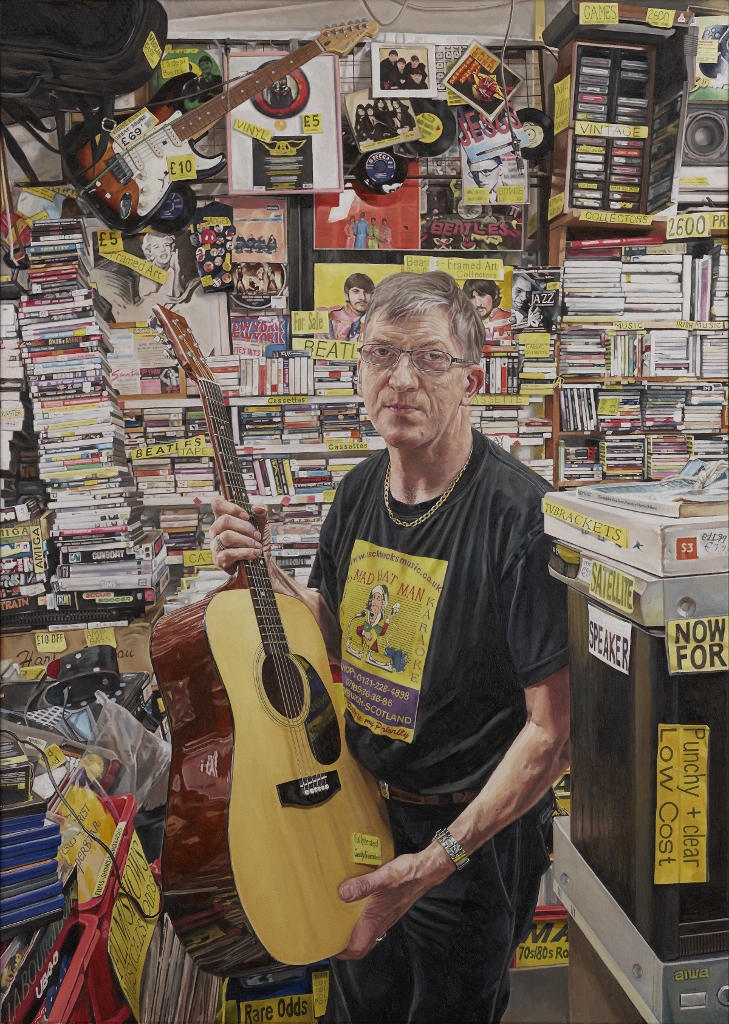 The subject of his entry in the 2020 BP Portrait Award is Tommy Robertson, the owner of an independent music store in Edinburgh. The store has been in business for more than three decades, selling second-hand records, instruments and video games, and Youds wanted to celebrate its eclectic individuality. ‘It’s a very detailed painting,’ he says, ‘I wanted the viewer to feel like they are inside the shop and maybe a little overwhelmed, not knowing what to focus their attention on. Visually, Tommy is engaging and the background is equally interesting. You could probably find something different in the painting each time you looked at it.’ The title Labour of Love refers to the UB40 album cover in the bottom left hand corner of the painting. It also reflects Tommy’s passion for music and the time Youds spent working on the painting.

The Portrait Award is an annual event aimed at encouraging artists to focus on and develop the theme of portraiture in their work. The competition is open to everyone aged eighteen and over, in recognition of the outstanding and innovative work currently being produced by artists of all ages.

One of the most important platforms for portrait painters, the Award has a first prize of £35,000, making it one of the largest for any global arts competition. The winner also receives, at the Gallery’s discretion, a commission worth £7,000 (agreed between the National Portrait Gallery and the artist). The second winner receives £12,000 and a third prize of £10,000 is also awarded. The BP Young Artist Award, with a prize of £9,000 goes to one selected artist aged between 18 and 30.

To enter, artists were invited to upload a photograph of their finished painting to the BP Portrait Award website, which were considered by the judges in the first round of the competition. 265 entrants were successful in this round and invited to hand-deliver or courier their work to a venue in London for the second round of judging. From this 48 works were selected for the BP Portrait Award 2020 exhibition.