Visitors to Hokusai Exposed will be immersed in the vibrant 3D streets and pleasure districts of Edo, 18th century Tokyo, and the works of the great Japanese Master, Hokusai, in an exhibition using state-of-the-art digital recreation technology, at the Old Truman Brewery, Shoreditch, London between 26 October and 17 November. A world will be brought to life which engages all the senses and fuses two popular Japanese art forms, Ukiyo-e, classical woodblock printing and today’s electronic art, both provocative expressions and popular entertainment of their times. 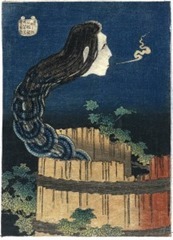 Hokusai Exposed will recreate Edo using the latest projection mapping technology, mixing high impact graphics to create a multi-media experience. Enlarged and enhanced reproductions of the original works will also provide the opportunity to examine the fine detail of the woodblock prints.

Hokusai was selected by Life magazine as one of the most important 100 people in the past 1000 years, and he has had far reaching influence. His influence is seen in the work of a host of artists including Manet, Degas, Renoir, Monet, van Gogh, Lautrec, Gaughuin, Debussy, Stravinsky and Satie as well as Manga and Anime.

More details about Hokusai Exposed and how to reserve tickets will be announced soon on www.hokusaiexposed.com