New Single By Jingo – The Winners Of Made In Shoreditch: Music Factory 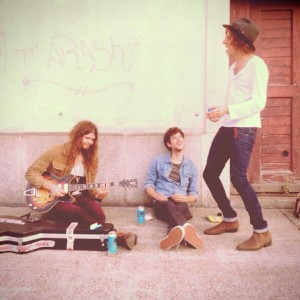 Oscar Suave are a 3 piece Psychedelic Fuzz band from London Compromising of Oliver Davitt on Vocals & Guitar, Erick Antoine on Bass & Vocals and Gal Cohen on Drums , The band take influences from the 60’s Psychedelic garage scene and modern day neo Psychedelia. With 2 EP’s recorded and self released in 2012 and a there Song “No Direction” featured on The Reverb Conspiracy Vinyl released through Fuzz Club Records, We are now in the studio much louder, Fuzzier and heavier as a 3 piece recording our 3rd 6 track EP due to released in early 2014 with a 2 week European Tour in the making.

Here is a quote from the Thinkpol Promotional Company: ‘Having not seen Oscar Suave for the best part of this year, since the new line-up with the introduction of a more stripped down band, it’s great to hear them live and louder then ever. There’s now more room on stage, but the sound has not diminished – The new evolution of Oscar Suave maintains the character and personality of their already released E.Ps but with added Fuzz with that true nostalgic garage band feel. With shows in Sweden, Denmark, and recently Switzerland under their belt and hints of new recordings in the pipe line, Oscar Suave is setting a strong foundation in the ever growing London Psychedelic Scene.’

Tickets to Made in Shoreditch: Music Factory Final Book now

More info about Made in Shoreditch: Music Factory