As the year comes to a close, Microsoft is in full-swing with its accelerator programmes. In the recent launch of the London-based programme, the corporation identified 12 early stage startups that it will be supporting from next year. Similar accelerator initiatives are being launched in ten cities around the world, including Tel-Aviv, Paris, Seattle and Beijing.

The 12-week programme, as part of the Ventures partnership system, will begin in February and based in London’s own Tech City. Technical assistance, mentoring, and access to resources that support cloud services, mobiles and gaming products, will come as part of the package.

The startups will have privileged access to three years of free software and support. At the end of the programme, the groups will get the chance to pitch their ideas to potential investors. 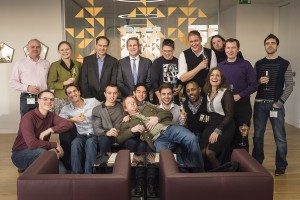 Michel Van der Bel, vice president of Microsoft International and the managing director behind Microsoft’s operations in the UK, stated “Through Microsoft Ventures, we’re getting back to our entrepreneurial roots to work with entrepreneurs at every stage of maturity across the ecosystem – from idea to product and then into market and beyond.”

He further added, “These technology startups and entrepreneurs are the future success of our sector. The future of our economy will be based on the success of these startups.”

The 12 firms include two gaming companies. Gateway Interactive, based in the Northern England, is working on Pure Space – a game they promise will provide players with a unique gaming experience through cloud technologies; and then there’s 8-bit Studios, another team of developers working on an online multiplayer called Skara.

Other named startups include Vivid Technologies (who aim to eliminate customer waiting times on the phone), Caribu (a program that allows families to read books and video chat at the same time), and Dataloop.io, a cloud monitoring service designed for enterprises.