Music in Shoreditch: Interview With MALF

G: Tell us about your band? How long have you guys been performing together? What did inspire you to start? What was the inspiration behind your name?

The band name MALF comes from my second name Palfreyman. At school my nickname was PALF and just after I left school, the brother of actor Richard Coyle, called me MALF instead just to be different (although he did coin a few other people’s nicknames that stuck as well!!) Richard was a few years younger than his brother and grew up thinking that MALF was actually my real name! After starting off in the school band as a trombone player, I had been in numerous bands since my early twenties and then moved to London and went to 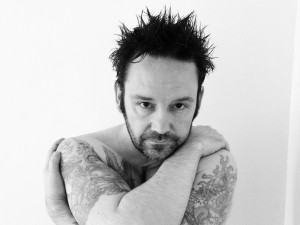 Richmond Drama school to train to be an actor as it’s something I was always interested in. This put my music career on hold as when I finished at Drama School; I went straight into the theatre and concentrated on trying to get more acting work. I was still writing songs during this period though and in 2010 released my debut album under my nickname of MALF ( I suppose it was meant to be) It’s a solo album really and was produced by my brother Stephen Palfreyman, who also played guitar and bass on it in his little studio in Dalston (Although a couple of the tracks would have been recorded when he lived in Shoreditch). Effectively it’s just us two with sax and a trumpet player, who both appear on just a couple of songs! When the album came out, I then got a few musicians together to play the songs live and that’s how it all happened. This was 2010. The band comprises of Scotsman Rodger Hanna on guitar, Jiri Svoboda from Czech Republic on bass and German drummer Patrick Degenhardt

G: What was your most successful or most enjoyed gig so far?

We played in Prague at Malostranska Beseda. A brilliant, famous old venue that is just at the end of Karluv Most (Charles Bridge). It was packed and the audience was very appreciative! We also travelled to California to play at the 4 & 20 Blackbird Festival which was organised by record producer Sylvia Massey. It was hot!!

G: How would you describe your typical fan?

Probably someone with great depth who reads Laurie Lee, Orwell, Bukowski and Burroughs who immerse themselves into the music of Bowie and the MC5 whilst imbibing in a bottle of 100% pinot noir all at the same time

G: Where have you performed?

G: Who writes the lyrics to the songs? Are the music and lyrics written in conjunction, or separately? How would you describe your creative processes?

I write all the Music & Lyrics. I pick up my acoustic guitar and just play whatever comes into my head. Lots of the songs come out straight away and just need a tweak. Others need a bit more time. I listen to all sorts of music so the styles vary and that’s how I like it

G: What are your plans for the future?
Just a bit of recognition would be nice ;-) Currently recording the second album which will be called ‘One Handed Applause’ and this should hopefully be ready in the spring. All the songs for the album after that are already written as well. I’m also writing a book about a walk I did through the Czech Republic. I walked the full length of the country from east to west!

G: Who/what are your favorite Artists/Businesses in the area?

Street artist John Dolan does some very nice stuff. Also I thought the artwork exhibited at the Made In Shoreditch event by Anna Laurini, Steven Quinn and Catherine Cronenberger Golebiowska was exemplary

G: What are your favorite places in Shoreditch?

I used to Love the Comedy Cafe on Rivvington Street and used to go to Cargo quite a lot. Usually when I’m in Shoreditch these days, I always go to Bar Prague. I saw a great exhibition of old Czech Film Posters there recently and when I’m sitting in there I almost feel like I’m back in the Czech capital