Why I Love Shoreditch By Jamie Merrick

Pupils dilated and limp wrist stamped, I’m eagerly queuing outside a grimy Hoxton warehouse alongside a vivacious flock of vintage-clothed partygoers. Conversations are incomprehensible and longer than the line in which we’re waiting but it somehow all makes perfect sense. Midnight clangs as the muslin drapes masking the dance floor finally part. We’re firmly herded into the darkroom-coloured slaughter house where we breezily float into the atmosphere. 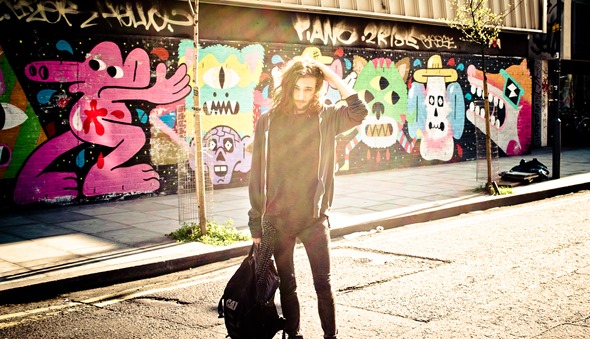 The irregular heartbeat of E1 reverberates around the lofty room like a funky rib-rattling bass line and the winking disco lights illuminate a sea of decadence. Our straitjackets of social conformity are released for another intoxicating evening of sweaty slut-drops, swallows on necks and future ex-lovers. So begins a labyrinthine lust story you’re invited to follow to it’s helplessly unnatural conclusion. Just another night out in the capital of London.

Shoreditch is lavishly laced with a mixture of the strange and beautiful. Aesthetically, the humans occupying the bars and cafes, are inarguably more symmetrical than other parts of town – it’s just a fact. The cheekbones are higher, the jawline’s are more defined and the Creepers appear steeper. Even the homeless you have no money or time for are kitted out in Burberry blankets and BOY London beanies. This is surely the only suitable zone to keep such beauties entertained. A waltzing wonderland swarming with idiosyncratic creatures once maligned in their former dwellings for the same reasons they’re now celebrated.

Who can possibly resist the tweed trees, acid wash rain and tie dye skies of the district formerly known as Sewer Ditch? Very few can. That’s why for many like myself, it’s the default setting for an evening out. We devoutly chase the next storm of fun as the Curtain Road lights invite into the night.

Spending the early hours elsewhere seems like a betrayal to your faithful beloved. The next morning you’re struck by the quilted guilt of having cheated on your geographical girlfriend. “It meant nothing, I swear…”.

Comparing the surrounding boroughs only strengthens one’s devotion to this area. Camden’s a let down unless you have a baffling lust for octogenarian punks bathed in piercings. Soho’s neon-drenched hoes are a seedy breed, synonymous with sleaze, that are best left for mincing businessman. As for South London? “No, I don’t want to try roller disco, thanks!”.

Shoreditch has enough to satiate even the toughest to please and is forever evolving to remain at the forefront of relevance. You don’t even need to have much cash. If you’re low on funds or just fucking mean – there’s an abundance of free stuff here! Free music, free poetry, free exhibitions – even free hugs (mostly offered by a clumsy bald headed ‘bear’ with a novelty moustache, knee-high Doc Martens and a fluffy fluorescent backpack). It’s also fast become the artists prime destination to splash the imagination. Canvas’s being replaced by the lands eternal asphalt, now resplendent with work from the next class of creative maverick, with everything or nothing to say.

I suppose the most fascinating aspect of this delightful district is it’s propensity of leading you into the depths of the bizarre. Both the places and the people are indelibly etched on the memories of all who have graced it’s space. It’s the thrill of navigating your way through winding streets, skipping past the arbitrary fonts emblematic of our beloved kebab joints, to reach vertiginous rooftop gatherings; the giddy paradoxical excitement of a spontaneous free gig featuring insipid indie bands just begging to be forgotten; or the insane rush of house parties brimming to the mortar with ex’s, sex & excess. This is the surreal deal.

Ultimately, the times spent here are so diverse and fragmented that it takes the length of the following week to digest them. Your kaleidoscopic memory is scrambled with heady visions of stolen red wine, jellyfish kisses and frisky twinks (pray in the name of Quentin Crisp that the only meat prevalent in your palate that night was served with chips). Mistakes are bound to happen. Quoth the raver, “Nevermore“.

As you anaesthetise the shame with a slick river of purloined red wine, it’s already Thursday evening and you’re on tonight’s guestlist. So with make-up gathered, skin lathered and tights laddered, you’re once again ready to tread the boards of Shoreditch. Two stolen bus-rides later and you’re at the front of a bustling venue with last weeks pals. Swallowed into the darkness of downstairs, the familiar roar of a prosaic indie band* meets your beleaguered ear drums and the festivities continue. . .

You have become ensnared by the tattoo’d arms of Shoreditch. Embrace them, and your life can finally begin.

* This band is now bigger than the Sun. I fucking love Shoreditch!