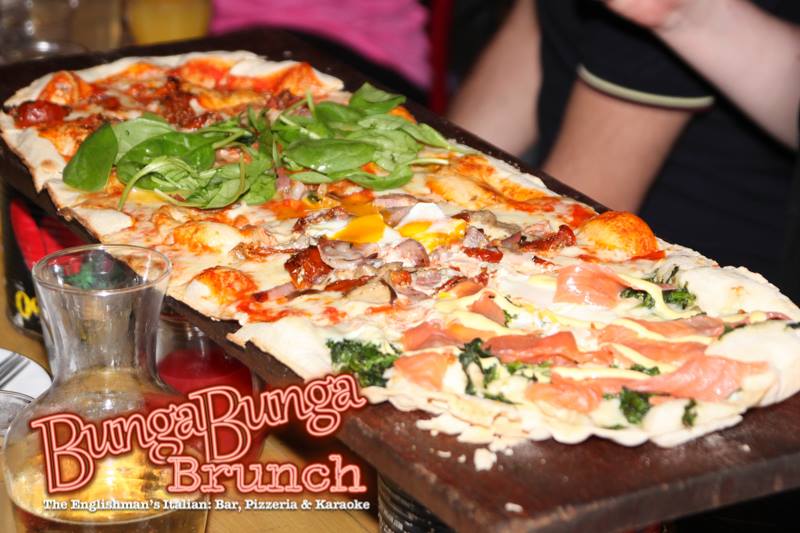 Living up to its namesake, Bunga Bunga is a feast of voyeurism – only without all the lurid goings-on of the Berlusconi house parties. On entering this “Englishman’s Italian”, as they like to call themselves, your pupils will be darting frantically to all nookinnos and crannettis of the room.

These guys don’t do subtlety. Forget the demure, half-laughing smiles you might expect from pretentious Chelsea locals. This place roars clutch-your-stomach laughter. From the barmen dressed as gondoliers to the grinning Berlusconis and the sneering Don Corleone on the walls, Bunga Bunga panders to all the clichés of Italy that Brits get a kick out of.

What needs no dramatic flair though is the food itself. Rustic in presentation and taste, there is a delectable authenticity behind all the fun. The soft burrata dish we have for starters is the cheese equivalent of a melt-in-your-mouth chocolate fondant.

As our naked body apron-clad waiter lays our playfully named Julius Cheeser and Italy’s Fun-Guy pizza down on a wooden board, we try our best to keep our eyes above his waist – but I’m pretty sure he sniggers to himself anyway as he turns.

For the finicky who say a pizzeria is only as good as their pizza base, Bunga Bunga’s thin and crispy base is infused with the flavour of generously offered toppings and does not fall short. The sweetness of the fresh tomatoes seeps through and is a welcome balance to the pungent truffle oil and pecorino cheese.

Nevertheless, we reach for the wine to neutralise our cheese-bathed palates but are promptly reminded that there is no rest for the naughty. The lights are turned off and the bouncy waiters line up to treat diners to a dance routine we are not sure is rehearsed or freestyle, which makes it all the more enjoyable.

It’s all part of the ‘–issimo’ that could easily have toppled over into loud and obnoxious territory but instead gives this simple Italian an infectious cheekiness.

We spoke to Simon Allison, Group Marketing Manager of Inception Group about the restaurant.

There is so much to Bunga Bunga – pizzeria, bar, karaoke, club. What inspired such a quirky Italian?
I think what Bunga Bunga offers is truly unique and certainly stands out in the local area. Battersea and West London have for some time been overpopulated by pubs. So in opening a venue that is unashamedly good fun and unpretentious, Bunga offers something different. A lot of those living in the local area are fond of Italy, having been on holidays there or enjoyed Italian culture growing up, which is key to us at they support the venue all week long.
Bunga Bunga calls itself “An Englishman’s Italian,” a play on all the clichés we associate with Italy. What about the Italian market? Is it also an Italian’s Italian?
I think at first, the name Bunga Bunga and its clear association with Belusconi may have made some Italians hesitant of the venue. But over time, we have seen more and more Italians come through the doors, both those who live in London and also those travelling to London. Over the recent World Cup, we screened the Italian football matches and the venue was packed to the rafters with Italians cheering on the Azzurri. The atmosphere and energy in the room was incredible. It was a shame they lasted as long as England! The vast majority of the staff working at Bunga are Italian and they are huge ambassadors of the brand, inviting many Italians down to experience the venue and often you hear as many Italian as English conversations over the bar.
There is a lovable cheekiness about this place – Was this something you knew you wanted to incorporate from the beginning or did it evolve naturally as a concept?
I am pleased you say that, it is something I would hope all Inception Group venues are known for. I think it comes from the staff who are integral to the delivery of the brand and concept, their energy and interaction with customers is something I think is less and less commonly found in bars and restaurants. The staff dance, for example, there aren’t many Italians that come to mind where you find the bar staff, waiters, waitresses, managers and security all performing a staff dance during the evening! When you think of an Italian restaurant, there are the generic large chains we are all aware of – we wanted to be stand apart from them, be unique and have a strong personality.
Where do you enjoy dining out in London?
Generally, I eat out near to our other Inception Group venues, you can never go wrong with Sophie’s Steak House on the Fulham Road before heading to Maggies and then VQ after a night at any of our venues. In Soho, near Disco, there are some great restaurants in Kingly Court now, the likes of Rum Kitchen, Senor Ceviche and Stax, which as with Bunga are all unpretentious.
What does the future hold for Bunga Bunga? Do you foresee further branches around town?
Bunga continues to grow year on year, the brunch is sold out every Saturday so I think we would like to develop some form of Sunday brunch concept too. We also have plans to take Bunga Bunga on the road at some point next year… Our founders are very much hoping to open more Bunga Bunga’s in London and are actively looking for sites in central London.

Dinner with wine, around £25 per head