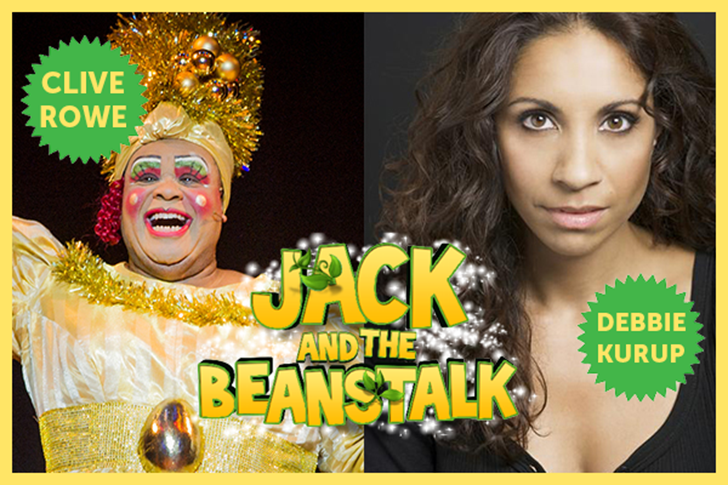 Hackney Empire is inviting the residents of London to join in on their gigantic Giant Hunt taking place across North and East London for a chance to win tickets to this year’s pantomime Jack and the Beanstalk! Hunters must watch the trailer starring Jon Snow (here) and then solve the clues below to track down the 8 giant foot prints located at selected venues across North and East London.  Filling out their official Footprint Finder’s card as they go, the aim of the hunt is to find as many giant footprints as possible, collecting stamps from each location. Once the hunt is complete, the hunter must return their card with their name and email address to Hackney Empire Box Office by Monday 7th September. More information on this exciting hunt of gigantic proportions can be found here and the clues are listed below.

Hackney Empire will present Jack and the Beanstalk as their 2015 Christmas pantomime. In time honoured Hackney tradition, the production will be written and directed by Creative Director Susie McKenna and composed by Steven Edis,their 17th pantomime for the Empire. Hackney Pantomime favourite Clive Rowe is to tread the boards at Hackney Empireonce again starring as Dame Daisy Trott. Starring as Jack will be Olivier Award-nominated Bodyguard actress Debbie Kurup. She is new to the Hackney family, having most recently appeared in the UK tour of Anything Goes, following her Olivier-nomination for her role as Nicki Marron in The Bodyguard in London’s West End. Hackney Empire favourite Kat B will join the pair on stage as Snowman with further casting still to be announced.

Rowe returns to the home of London’s number one pantomime after reprising his Olivier-nominated title role in Mother Goose in 2014. The production was Hackney Empire’s most successful pantomime to date and was seen by over 50,000 people from all over London.

In true Hackney style the production will feature a break dancing cow, bonkers baddies and the scariest giant ever, outlandish costumes and glittering sets by Lotte Collett, buckets of silliness, tons of audience participation and full-on show stopping songs performed by a kickin’ live band.

After 15 years of perpetual winter the kingdom of Hackneydale is really feeling the pinch of austerity cuts. McKenna’s production follows two stories, that of young and earnest Jack and of the HUGE scary giant. Whilst Jack is tempted by a mysterious stranger into swapping the family’s trusty old cow for a handful of magic beans, the Giant’s inventions for making gold are destroying the Earth… Can Jack and his crazy mates save the day?

1. Watch the video and read the clues below.

2. Solve the riddles and visit the venue you think it might be describing.

3. Each participating venue will have a giant’s footprint displayed.

4. Collect a Footprint Finders’ Card at the first venue, or from Hackney Empire Box Office or downloaded and printed from this page.

5. Ask the venue to stamp your card.

6. At each venue you visit ask them to stamp your card.

7. Collect as many stamps as possible, then return your card with your name and email address to Hackney Empire Box Office, 291 Mare Street, London E8 1EJ by Mon 7 Sep.

For London’s No 1 panto

There’s only one place to go.

So buy your tickets from this “box”

And get ready for a fabulous show!

A quiet place with lots of books,

Next to Hackney Town Hall.

But you don’t need to buy them

Because borrowing is free for all!

Down near Bethnal Green

There’s a place with lots of toys

On display because they’re old and special

The V&A’s history of little girls and boys.

In Shoreditch there’s a place

Behind a beautiful garden wall

A museum of the home

Mr Geffrey once owned it all

Down on the road of kings

The first one opened in Oxford

And this one is well worth a quick stop!

If kids books are what you need.

Find them here at the shop whose name,

Peter Piper picked a peck of these.

In N22 another bookshop lies

Packed with reads for young and old

A hop, skip and jump from Turnpike Lane

Its Big and Green, a wonder to behold!

On Kingsland Road there is a cafe

Or is it a pirate ship?

There’s plenty of adventures to be had

So start planning your trip!

A Family Ticket to the panto, an in-show shout out from our panto dame, 4 free drinks vouchers, 2 show programmes, and a photo with the cast!

A Family Ticket to the panto, an in-show shout out from our panto dame, and 2 show programmes.

A Family Ticket to the panto.

1. Only one stamp can be collected per venue.

2. There are limited prizes available so by returning your Footprint Finders’ Card you aren’t guaranteed a prize instead you’ll be entered into a prize draw.

3. All prize winners will be alerted by Mon 14 Sep.

4. Those who win a Family Ticket to see Jack and the Beanstalk will need to select a performance Sun 21 Nov – Thu 3 Dec (not including Thu 26 Nov).

5. A Family Ticket consists of 2 adult and 2 child tickets

6. Prizes are subject to availability.

Let me know if you have any questions.