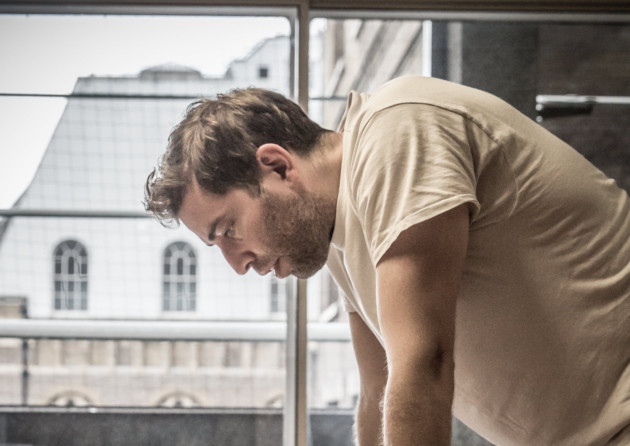 Photograph 51: An Interview with Edward Bennett

RADA graduate Edward Bennett iambic-pentametered his way into the public consciousness back in […] when he stepped up the role of Hamlet in the RSC production starring David Tenant during Tenant’s absence. Now the Hackney-local turns his attention from soliloquist to scientist as he plays the part of DNA discoverer Francis Crick alongside Nicole Kidman’s Rosalind Franklin in Anna Ziegler’s work Photograph 51, which opened to rave reviews this week.

We caught up with him last week to talk origins story, Hackney living and how he got into the character of one of science’s most influential figures.

You’re pretty well established on the stage now, but where did it all begin?

EB: I first started acting, probably, when I was in primary school doing bits and bobs. I played a rabbit and I had to borrow my dad’s pipe, because I was playing an old rabbit. And I remember the first time I got stage fright was when I went to speak, I think I was six, and the pipe fell out of my mouth and I remember being terribly scared because I thought I’d ruined it for everybody.
At school I had a brilliant drama teacher, as so often is the case, called David Van Hale, who, when I was fourteen I changed schools, I went from a private school to my local comprehensive school, which was a really good decision for me, and he saw something in me and I really enjoyed his lessons. And then I did school plays and did at university after that and then went to drama school. But it was probably about fourteen that I started to really enjoy it and wanted to do more and more of it.

You’ve got quite a lot of work under your belt now. You’ve done everything from Shakespeare to Alice in Wonderland

Bit of this, bit of that! I’ve been very lucky. I love Shakespeare and I think every actor just wants to do good writing, good work, and you can’t really get much better than Shakespeare so I was really lucky to do some of his work – or their work, or her work. I’d love to do more of that, but it’s really nice to also, to do new writing and to feel like you can represent writers and human beings that are written about by these writers of today. As great as it is to do classical work it’s really nice to do new writing as well.

Was it the writing that really appealed to you about Photograph 51?

I’d never read this kind of play before, that had this kind of style to it and told this kind of story as well, it was amazing that not many people know that much about this story. Everyone knows something about DNA, and a little bit maybe about who found it and what it was all about, but no one really knows what happened or the processes of finding it, and also the cost to those people who were involved. The story is so beautifully written, even when I was reading it off the page it came across really well and I was really enamoured with it.

How are you preparing for playing Francis Crick? Probably one of the most influential scientists of all time.

What’s nice about it is no one really knows what he sounds like, looks like or walks like, so that’s quite nice from an actor’s point of view. It means that I can have my own artistic licence in order to represent him. Some actors would want to look as much as they could like him, to walk or talk or use the mannerisms of him, like a Michael Sheen kind of thing, an extraordinary impression, but you’ve got to be careful, certainly in the theatre, that you don’t go too far down that route at the expense of the story, and the narrative that the playwright’s trying to tell. So I watched a lot of the YouTube stuff about him, and I read as much as I could understand of what he wrote, and talked to people who knew him and understood his work. We had some wonderful people come to talk to us from Kings College, and show us exhibitions of letters that were written between Watson and Crick, Wilkins and Franklin. So to get a real idea about who he was, and how he fitted into this story, and what his role was exactly, and the relationships he had with other people.

That’s a really interesting way of looking at it, because he’s not the most sympathetic character was he?

Well he was arrogant and egocentric and had a kind of vanity, and a gregariousness as well, that was both appealing and also I think frustrating for the other scientists. He was also, a bit like Watson (played by Will Attenborough), willing to make mistakes, he didn’t mind getting things wrong whilst other scientists think that’s heretic almost, and not to be done. I think one of the reasons that he and Watson got on so well is that they were both a bit avant garde, a bit more risqué when it came to their approach to biophysics and biochemistry, whereas Wilkins and Franklin were more exacting and more precise and didn’t want to say that anything was the case before they absolutely knew. So that’s what’s quite balanced about this story is that there’s no good guy or bad guy it’s up to the audience to decide.

I’ve some time for Crick, he was an incredible mind, and a passionate scientist – the day before he died he was still marking papers. The Crick Institute, which is opening up in London, is an amalgamation of all the London universities getting together to fund a science institute. So he’s still in the public consciousness, certainly within the scientific community.

He’s clearly been a fascinating character to portray.

Yeah, he really is.

Lastly, as a Hackney resident, do you have any top tips for things to do in the area?

The trouble with me I’m afraid is that my roots are quite rural, Gloucestershire. So I feel, in Hackney and Hoxton and Shoreditch, like a kind of old uncle. I can’t fit into skinny jeans, I’m not allowed to grow a beard, I don’t have any glasses without lenses in and I don’t know how to play synth. But it does mean that I can wear what I want, all my dad’s hand-me-downs, and actually make me feel like I’m setting trends rather than following them, so in that regard I fit in I think.

I love Hackney though. I’ve lived in 11 different places in London because I’ve had to move away for work a lot in the 12 years I’ve been an actor. It’s been really, really amazing to live in the one place in London that really has felt like home, out of all of those other places. I like the people, I love the multiculturalism of it, within that sense of development and gentrification that everyone talks about, I still think that around Bethnal Green and Hackney there is still that sense of old London, it’s still there. And it’s also great when you say you live in Hackney because everyone automatically gives you just a couple of credits of cool.

Photograph 51 runs at The Noel Coward Theatre till November 21.