Interview With A Band: Highly Suspect

Tell us about your band, how long have you guys been performing together? What did inspire you to start the band?

We’re three best friends that are blessed with the ability to travel around having fun together. Rich and Ryan are twin brothers and I met them in highschool, but we wouldn’t become real friends until we met at a party after we were out of highschool. We got a house together when we were all 19 and we would just play for fun in the basement for hours and hours because it was so cold in the winter time and there wasn’t much to do in our hometown. Eventually in 2009 we decided to take it to a local bar and that was the official start of “Highly Suspect”. I think we decided to fully go for it after watching a Muse concert. We were so impressed that there were only 3 guys making such a massive wall of sound.

Just a month ago you have been nominated for 2 Grammy Awards, what did you do when you heard the news? What do these nominations mean to the band?

My friends were calling my phone off the hook so early in the morning. I was actually in my hotel room with a girl and threw the phone at the wall because I had only just gotten to sleep. When I finally decided to see what the fuss was I almost laughed. It kind of feels like that Freddy Prinze Jr. Movie when he got dared to ask the ugly girl out to the prom.. It’s as if it was a joke. It still doesn’t feel real. We are honored to have been recognized.

Music industry is super competitive these days, was there a moment in your life that you wanted to give up on music / band?  How did you manage to stay focused and achieve what you want?

Every day. I constantly wonder if I want to deal with all the pressure anymore. The bigger you get the more they all want. Lately I’ve just decided to stop paying attention to what people say online etc.. I’d rather not focus on competing. I don’t care if we win a Grammy or two or none. I just want to continue making songs with my friends and performing in new cities. That’s what it’s really about.

How would you describe your creative processes? Who writes the lyrics to the songs? Are the music and lyrics written in conjunction, or separately? Where does the inspiration comes from?

There is no “process”. It’s always different. As for lyrics, sometimes they are scraps on a notepad, sometimes they come right out over a rif. I wrote 90% of the lyrics you hear on Mister Asylum. We usually write the music together after I come up with a basic riff or two, but again, that’s not always the case.

My favorite tracks aren’t on Mister Asylum. Those are old photographs to me now. I like what I’ve been writing more and can’t wait to record them and release them. The shitty part is that by the time that happens I will be sick of them too. What an audience here’s on an album is always old news to the writers.

There are a ton that land in my favorites category. I guess more recently it would have been when we played with Foals and Silversun Pickups.. I just felt like the lineup was so good and therefor the energy in the room from all of the different bands fan groups seemed to blend well together. A sincerely special night.

I have no expectations. All I know is that I’m through the roof excited. We’ve been dreaming about jumping over the pond for all of our lives. 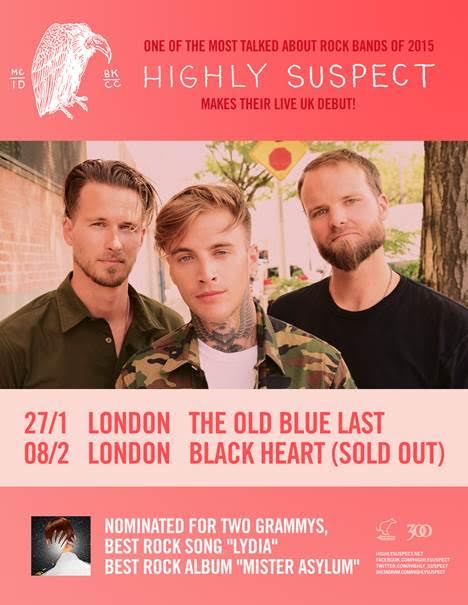