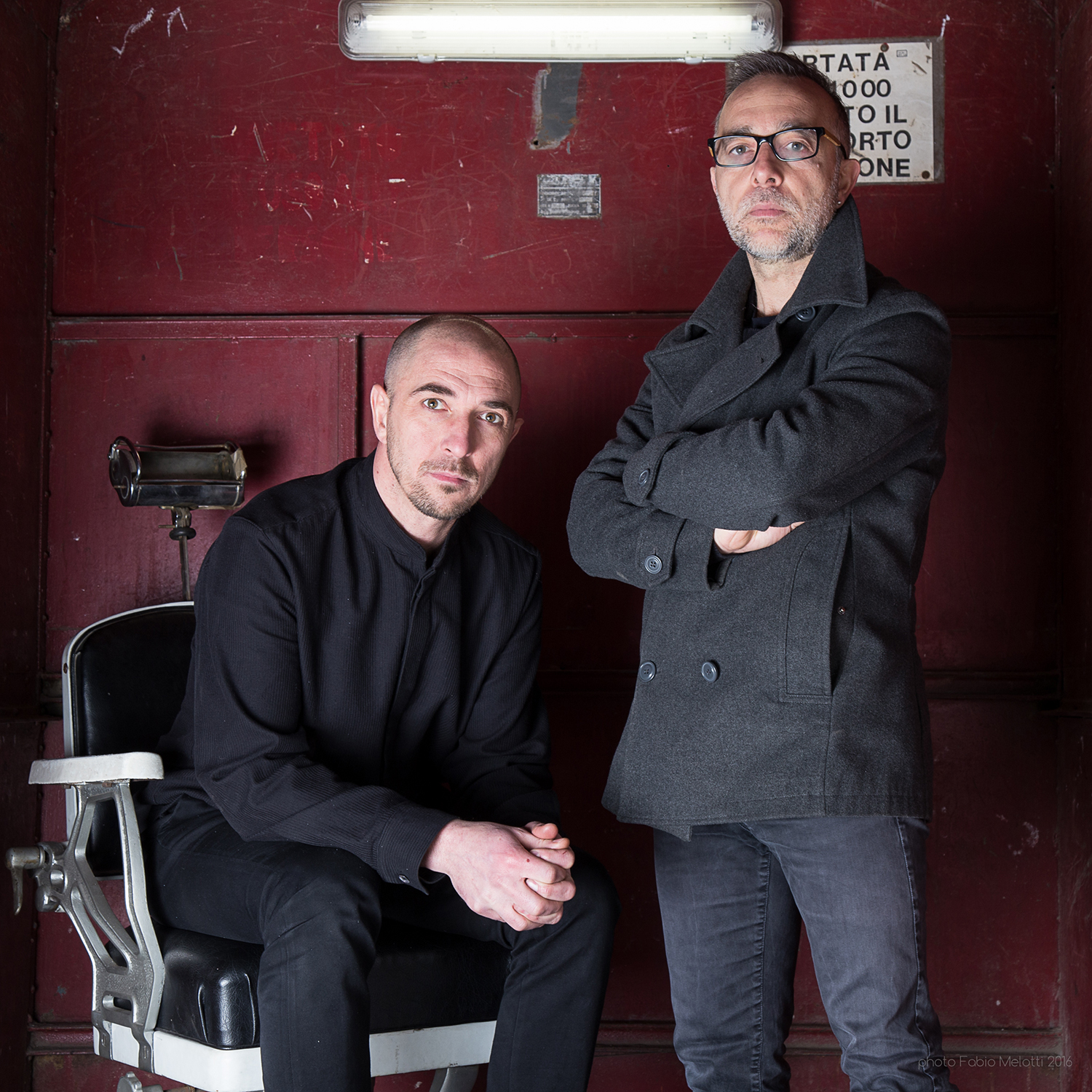 Electronic and instrumental artists OZMOTIC have announced their upcoming album “Elusive Balance” to be released via Touch. Comprised of Simone Bosco and Riccardo Giovinetto, the duo has collaborated individually and as a collective with the likes of Christian Fennesz, Murcof, Senking, Bretschneider, William Parker, Mary Halvorson and Murcof, just to name a few. As individuals, they represented Italy in the International Biennial of Sarajevo, won the “Movin ‘up” award of the Italian Ministry of Culture and conducted 80 percussionists in the opening ceremony of the XX Olympic Games at Teatro Regio di Parma, Turin, broadcast worldwide.

We caught up with the Italian duo to talk about their experimental approach to music and their creative process.

Tell us about you, how long have you been producing music?

Simone: My father was a guitarist, every night at home he played for the whole family … we did not watch TV, there was no internet … we played and sang together. I started studying music at 8 and at 12 I started studying the drums, I never stopped doing it…

Riccardo: I started to play classical piano at the age of five, then after eight years of classical studies I was feeling to expand my idea of sound and i came up against the sax… then after a lot of years of practice and during my physics studies I met the concept of “sound” and then all my different interests became one: the electronic music.

What did inspire you to start?

OZMOTIC’s music is born from the encounter between our past musical and instrumental experiences and the use of digital technologies. It is not easy to label the music and it’s even harder to do it with your own. We could say that in our music there are traces of ambient, glitch, contemporary music, jazz, soundscapes… everything is held together by a constant research and attention to “sound”, to detail and form. Sound experimentation has always played a fundamental role for us and it is never an end in itself but always aimed at the result we want to achieve. Today, the music is too often experienced as a consumer good and pure entertainment, we try to put the beauty of the sound and the attention to details back to the center of the music. We think of our records and concerts as “works of art” that require an emotionally active approach both on our part and on the part of the listeners. An extremely important role is linked to the concept we choose to generate the flow of ideas. “Elusive Balance” explores the relationship between humans and nature, as well as the search for balance between these two great entities.

The theme of equilibrium and its precariousness, and its natural tendency to achieve relative stability connects all living things. Equilibrium is also a junction point and evolutionary engine – unstable and elusive, ready to deteriorate and to start a new reaction mechanism bringing organisms to a new harmony.

Musically the album seeks resolution of sound contrasts, in a continuous search for an emotional component that gives simultaneously a feeling of tension and stillness. There is a duality between the ‘organic’ components (represented by soprano sax and percussion) and their interaction with machines and computers. In “Elusive Balance”, OZMOTIC investigate the essence of their sound to expand its emotional and
compositional potential. Each track contains a search for a synthesis between sound elements apparently distant from each other, but in reality, create a new balance – as poetic as it is musical. The album’s seven tracks draw a sonic flow in which the melodic aspects are countered by glitches and angular sounds, and the ambient passages are subjected to heavy rains of rhythm, leaving space for dreamlike moments.

The music industry is super competitive these days, was there a moment in your life that you wanted to give up on music?

Simone: I make music since I was a child … I never thought about quitting, it would be like asking me not to breathe or not to feel emotions … impossible. Of course, sometimes I went through moments of creative and professional crisis but they are part of life and I have overcome them by looking forward.

Riccardo: Ten years ago I felt ill for a long period because I was practicing the sax too much and my arms, my hands, and my neck were terribly painful. That was a very bad period and I thought to give up. But then I started to study other things… programming with Max/Jitter and working on the visual and after some time I felt better and I founded a balance in practicing the sax and all the other stuff that became what we are doing now.

Moreover, about the music industry, we think that within the musical areas of our interest, the new millennium has brought to light a sort of boundary line that can not be easily reached, the world of electronic music following the arrival of the digital and after a fierce experimentation it lost, with the use and abuse of the laptop a relationship with the performative side of music that is vital, crucial; We must ask ourselves how the audience can interact with the sound world that is enveloping them, and then we believe that the answer is unequivocal: the union of the digital world with the instrumental and performative world it can only lead to an explosive result, full of possibilities, and it is precisely here that there is much to do, find balances, forms, alternations, new timbres, complex rhythmic solutions and more. Musical evolution, in the same way as other disciplines of human knowledge, will be inevitable. For the years to come, we believe that it will no longer make sense to talk about electronic or acoustic music. Also from a compositional point of view, it would be opportune to reflect: the question is whether techniques like generative music can be considered compositions… On the other hand, Cage has extensively investigated the random music with the use of completely random techniques such as the puzzle on tape or the I Ching and also Boulez used strictly serial compositional techniques. Both of these compositional approaches are based on elements that can now be entrusted to computers and produced in real time. Obviously, the problem is that, with the software available today, it is extremely easy to compose and produce music and therefore, from our point of view,
the discriminant is always the control and awareness of the elements that determine the final sound result.

How did you manage to stay focused and achieve what you want?

We both have a daily routine in practice our instruments, in composing and working with the digital elements of our artistic project; that’s our key to stay focused on creating something beautiful that gives us satisfaction.

Furthermore, we have a wild passion for creativity.

We work together to define the conceptual framework of the recording project and the “live” that will follow, we choose a set of ideas and isolate keywords. Starting from these elements we begin to prepare sound sketches, keeping a very high attention on the space of the sound spectrum that each element must occupy: melody, rhythmic components, textures, low frequencies. soundscapes. After this phase, the arrangement work begins. At the same time, Visuals are created and the modality of reaction between images and sounds are developed. Finally, we evaluate the forms of the pieces in relation to the overall work, the times (both durations and pulsations), the timbres and weights of the instruments and we think about the overall direction that the project is taking in terms of sound and vision.

We noticed that the visual art is a strong aspect of your performance. Could you tell us about the creative process behind it?

Over the years we have focused on the identity of the project, an identity made up of many elements, details, and nuances. Elaborating an artistic manifesto is not secondary to build a project like ours and then besides having worked on “sound”, on the compositional forms and on the relationship between our musical instruments and the digital components and to have identified the references for us fundamental (the European cultured music, ambient, glitch music, electronic experimentation, the Idm, contemporary jazz), we investigated the field of graphic design and audio-video interaction. The link between sound matter and vision is inherent in the nature of digital language; both are made up of the same minimal units. In many cases, the sound is its graphic track, and the graphic track is the sound. This is a structural uniformity that takes place both at the level of data organization and processing and at the level of software. Given this, the nerve point is that we have to find a balance between the parties. This is a goal that over time we have tried to always keep in mind and which we have already mentioned earlier for the main musical question but which at a macro level is even more present in the relationship between audio and video. The two flow, the audio and the video, must be born in parallel, follow the same conceptual lines and condition each other, so as to become a unique, and in relation to this the work must be developed looking for this balance both through flows of hierarchies (what is more important and what is less for each phase of the project), dynamics (kinematics and luminosity), interaction in real time (clearly, but not in a banal way, of “movements” of sound and physical actions to visual events) and last but not least have an overall evolving narrative, both in terms of sound and vision.

The conceptual framework arrives with the sharing of a vision. The songs are built to very specific ideas in terms of composition and sound. “Elusive Balance” explores the relationship between humans and nature, as well as the search for balance between these two great entities. The theme of equilibrium and its precariousness, and its natural tendency to achieve relative stability connects all living things. Equilibrium is also a junction point and evolutionary engine – unstable and elusive, ready to deteriorate and to start a new reaction mechanism bringing organisms to a new harmony.

What’s your favourite track from the upcoming album and what other bands/artists are you listening to right now?  What’s next for you?

In the coming months, after the release of the album, we will focus on the “live”. We will continue to develop our work in different fields, maintaining the centrality of music… Elusive Balance will not only be a record, it will have other variations.
We will further develop the potential of real-time interaction between visuals and sound.