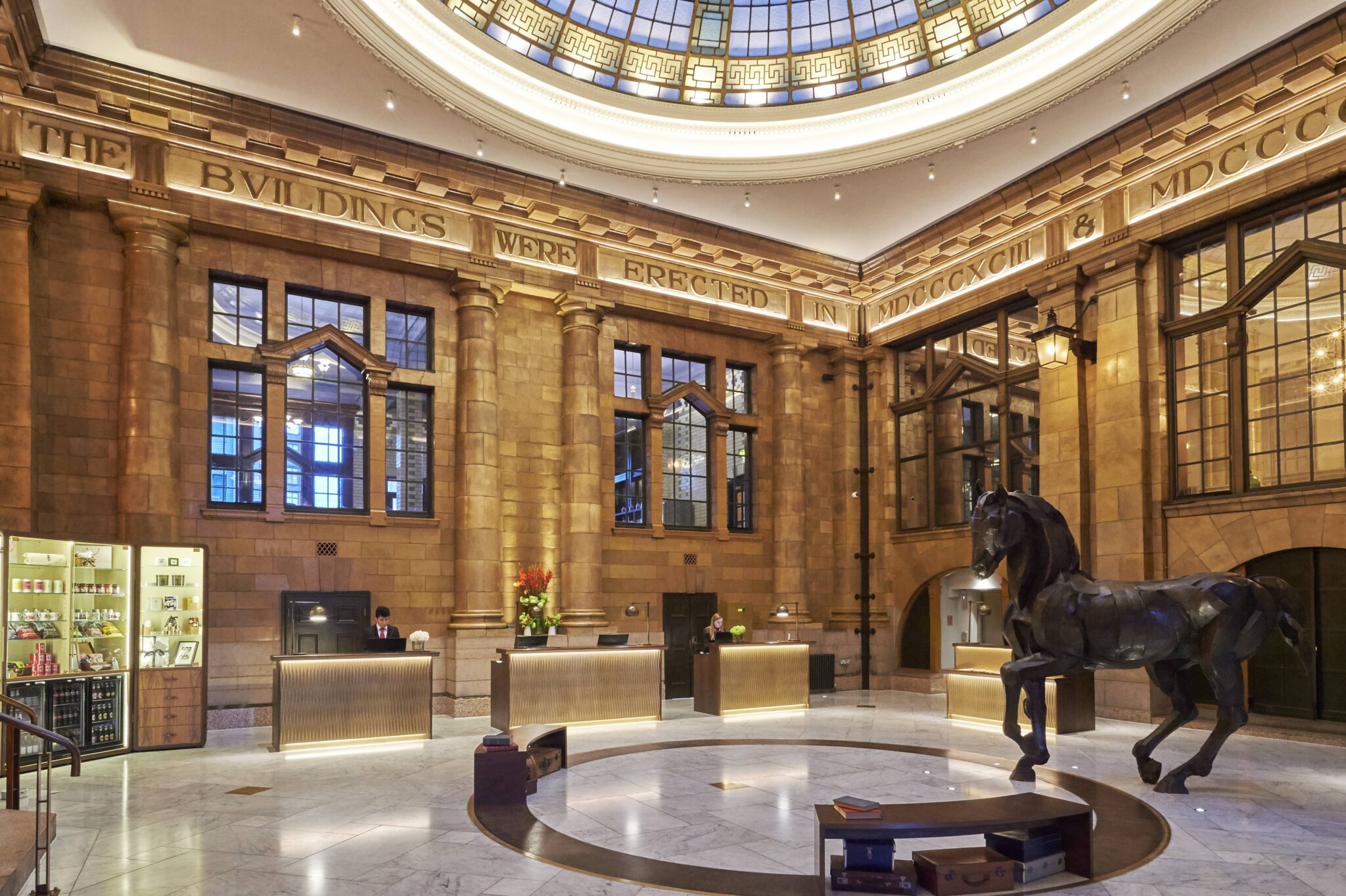 One weekend this month in August, I had the fantastic opportunity to stay at the Principal Manchester. The Principal is centrally located and based in Manchester’s iconic Refuge Assurance Building formerly home to a large insurance company in the past. It opened in 1895. 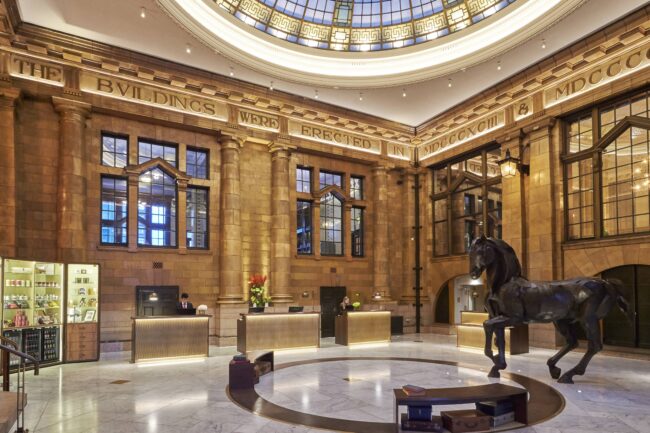 Coming from London it was very convenient with the hotel located a short 10 min drive from Manchester Piccadilly. What struck me when entering the building was the elegant atrium foyer which during the day fills with natural light. The reception staff gave us a warm welcome and the check in was a very smooth process with the receptionist kindly asking if I had been to Manchester before and what I planned to do while in the city.

Being my first time in Manchester it was great to get an impression of the city with a rich history and industrial heritage which really shines through the city’s architecture from The Principal of course, to the Gothic architecture of the Town Hall. Manchester is the 3rd most visited city in the UK after London & Edinburgh and plays host to 2 well regarded universities, Manchester & Manchester Metropolitan a former polytechnic.

Manchester is an incredibly vibrant city playing host to two giant football club Manchester City & Manchester United. The locals are friendly and welcoming and more relaxed than the busy residents of London, there are lots of local shops alongside traditional brands and plenty of pubs with local character. There are plenty of places to visit for Londoners visiting for the weekend, such as Manchester United’s football ground at Old Trafford and for shopping the Trafford Centre or Arndale centre. For those escaping the city and looking to walk, Manchester has six designated local nature reserves, Chorlton Water Park, Blackley Forest, Clayton Vale & Chorlton Ees as well as Highfield County Park.

For those wondering how long it is from London to Manchester, it is only 2 hours by train from London Victoria on a high-speed train. Certainly, after visiting London it was a pleasant change in atmosphere being a smaller city Manchester has a great deal of pedestrianised areas and an impressive tram system.

After an evening exploring the city we returned to the hotel and decided to have a drink at the hotel’s bar Refuge by Volta. The bar on a Friday night was incredibly lively with a DJ playing and a variety of different areas to relax. With an elegant dining room that we visited for breakfast the next day.  Refuge is a dining room and bar created by Principal in partnership with DJ duo turned restauranteurs Luke Cowdrey & Justin Crawford behind the award winning West Disbury restaurant Volta. There is also an outstanding dining menu at The Refuge serving seabass ceviche to lamb shawarma, black daal to salted cod croquettes. The venue is certainly somewhere I would visit on a Saturday night with friends to absorb the local culture. 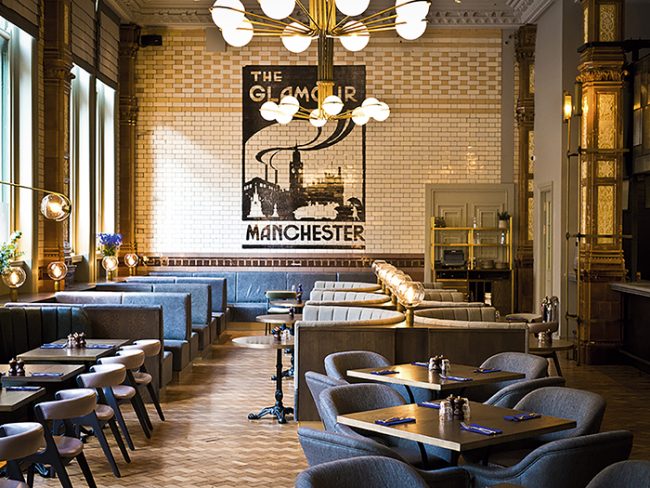 The hotel also has a stunning Winter Garden pictured below, which is a pleasant place to work and relax away from the bustling bar and restaurant area. With large comfortable sofas to recline on and a centre piece featuring a large tree. 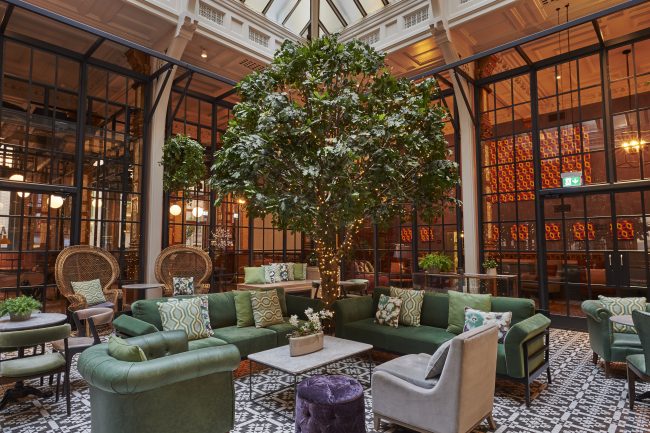 The hotel plays host to 270 guest-rooms and also hosts the largest hotel ballroom in the North West of England, which can accommodate up to 1000 seated guests. Our room followed the impeccable interior design of the hotel with high ceilings in a relaxed wood panelled setting. On the walls of the room there were several paintings showcasing Manchester’s vibrant industrial past. 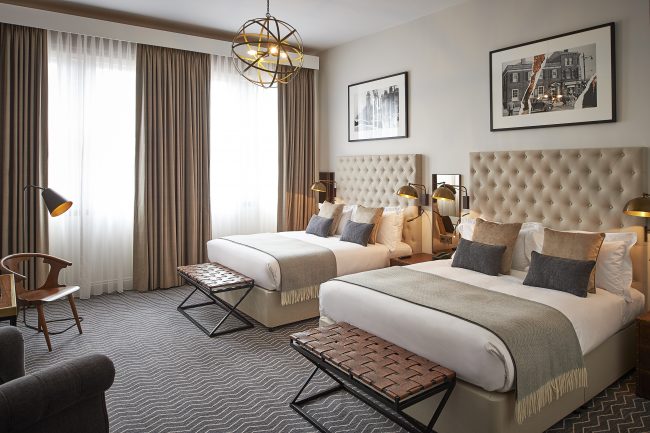 The hotel certainly reminded me of London’s The Ned with its grandness and Edwardian style. In 2013 the hotel received £25 million towards its refurbishment which is clearly evident while exploring the hotel’s various sections.

The Principal Manchester owner is a collection of city-centre hotels based in landmark buildings in exceptional locations across the United Kingdom. The distinctive heritage and resulting relationship between the properties and their surroundings are the cornerstones of the Principal brand. Each of the hotels has a story to tell—of its history, its design and architecture, its quirks and characters, and its role in shaping the city and forging relationships with local partners, whether corporate or creative. From the elegant Georgian townhouses that form the core of The Principal Edinburgh George Street (formerly The George Hotel) to the clock tower that’s synonymous with The Principal Manchester (formerly The Palace Hotel) and its history as the headquarters for the Refuge Assurance Company—Principal Hotels define their cities and neighbourhoods.

Overall, I would certainly recommend visiting the Principal in Manchester for the spacious rooms, incredible foyer and exciting variety of events and places to visit in Manchester. Please see below information regarding booking: