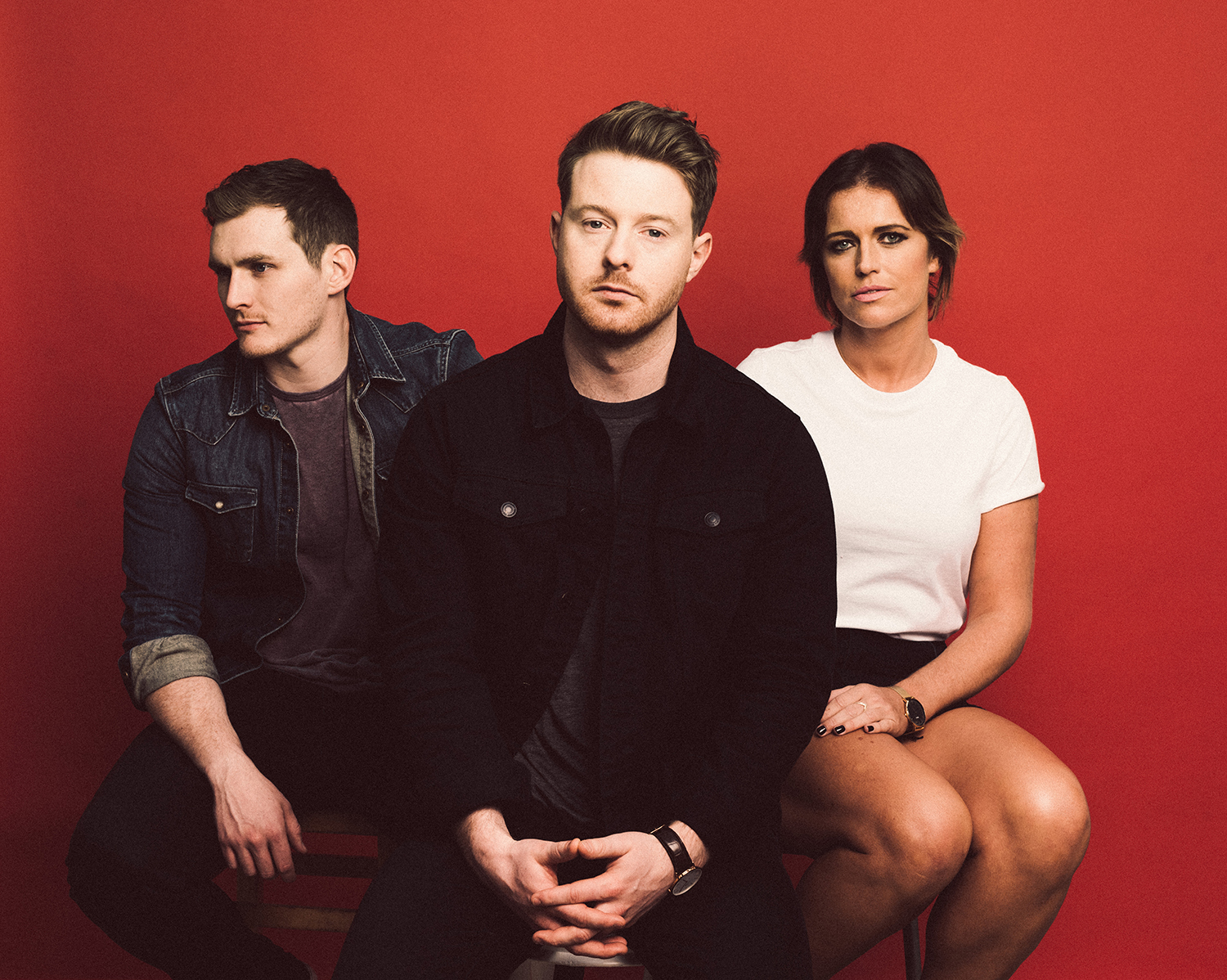 CAEZAR is the UK indie-pop trio making waves with their unique sound that flawlessly blends infectious electronic production with skilled live instrumentation. The band has just released their brand new debut EP, ‘HAIL!’ via RG Records, a four-track triumph that takes the listener from the bounciest pop sounds to beautifully clear moments of self-reflection.

In a press release, the three-piece commented that, “A recurring theme throughout this EP is ‘movement’. Whether it’s excitement, remorse or anticipation – the concept of transition and change remains something close to the heart of each of us and is something we wanted to express through this EP.”

We caught up with the vibrant members of CAEZAR and chatted about songwriting, their upcoming tour, and dealing with rejection.

We’re an electro-pop three-piece from Cheltenham, UK – although now based in London. Chris and Rich first started performing about 4 years ago after meeting on the rugby pitch. They played for the same rugby team and both got injured at the same time. As they couldn’t play rugby, the had to find another way to spend time, so started the band! Zoe came into the mix in 2015, first as a backing singer but her voice and character were so strong she quickly established herself as a key member of the band. We then had a line-up change in 2017 with 2 members leaving the band; this left just Chris, Zoe and Rich (C,Z,R) in the band. It seemed like the right time to close the chapter on Quigley and start something new. We’d started working with a new producer (Justin Broad) at the same time and the chemistry of it all just seemed to click. 18 months later and CAEZAR was born.

The music industry is super competitive these days, was there a moment in your life that you wanted to give up on music / the band? How did you manage to stay focused and achieve what you want?

One of the hardest things we deal with regularly is rejection. Creating and growing music that you love is not easy. It takes a lot of dedication and persistence to get your head above the water, and even then, expect a lot of rejection and disappointment. There’ve been several times we’ve been told ‘no’ by people we hugely respect and look up to, which can be a tough pill to swallow. However, we’re lucky in that we’re friends first and a band second – which means we’re able to support each other when times get tough. We all really believe in our music and it’s this self-belief that keeps us riding the highs and rolling with the lows.

How would you describe your creative processes? Who writes the lyrics to the songs? Are the music and lyrics written in conjunction, or separately? Where the inspiration does come from?

There’s a real chemistry to our songwriting process. Most of the songs will start with Chris and an idea he might have – generally he will have the idea of a melody or a hook to start with, then this will be brought into the studio where Rich will add various tonal ideas and Zoe will add her vocals to the mix. Depending on where we are or what we are doing will hugely affect the formation of the track. We will then try to lay down a drum track to give the track some identity, and then we will play around with the lyrics on top of that. With the lyrics, we usually have the chorus or the vocal melody already defined but we will then spend a lot of time ensuring the lyrics fit the tone of the track.

We probably all have different favourite tracks from the EP – ‘Waiting’ is a confident and frisky track that really opens the EP with a bang, while ‘Hold On’ is more introspective, bittersweet track. ‘Somewhere New’ is athematic and an infectious summer jam. It’s hard to pick a favourite, we are so proud of all of the tracks. In terms of other acts, we’re loving Raleigh Ritchie, Sigrid and Rex Orange County – ‘Sunflower’ and ‘Loving is Easy’ are modern pop masterpieces.

Our favourite memory so far has to be when we performed at Alt Fest in Belgium. It was our first international show and really opened our eyes to how far music could take us. We were treated like royalty, we got to meet loads of amazing acts, and also were able to hang out for a night in Bruges – which we’d highly recommend. It was an incredible adventure.

We’ve always been proud of being a live act first and recording artists second, so we’re itching to get on the road now to perform these tracks live with our fans. We will be going back to our favourite places, such as Bristol, Birmingham and Cardiff who have always treated us well. London is always fun but it’s actually the places we wouldn’t normally go to that we love the most – Hull sticks out as a particular favourite for us. We will be announcing 2019 tour dates very soon. Head over to our Facebook page to ensure you get the updates when they are published.