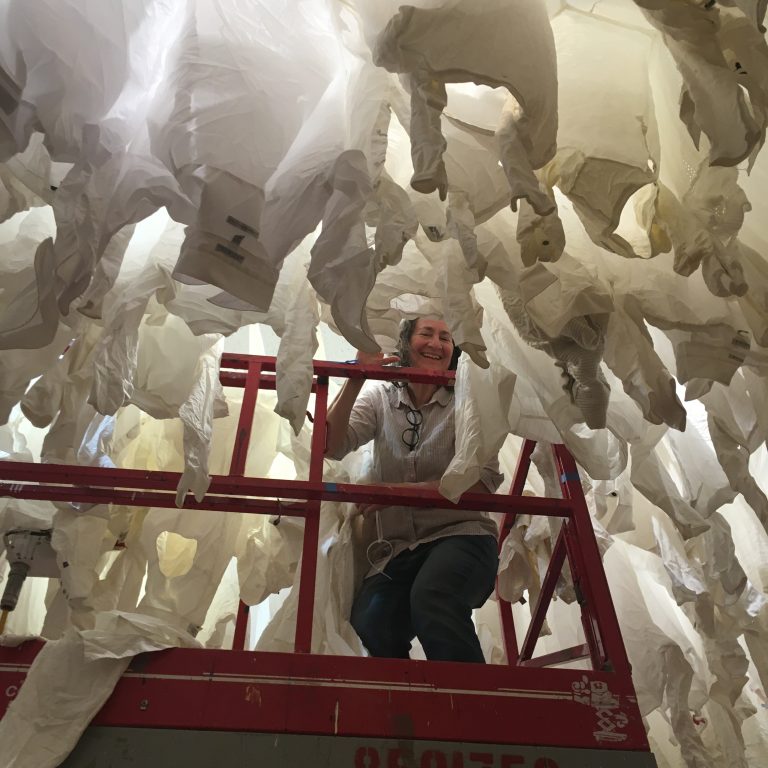 Artist Rachel Breen installing her exhibition, "The Labor We Wear."

The Labor We Wear

Over the past few years many people have come to realize that the garment-producing industry is not a pretty sight. But still, most people don’t think about the labor that was put into the clothes they wear every day. In Minneapolis, Minnesota, one artist is taking a stand through her exhibition, entitled “The Labor We Wear,” to bring to light the dangers of the industry and how, we as consumers, are complicit.

Rachel Breen, who holds an MFA from the University of Minnesota, explained her inspiration for her show in an interview with the Minneapolis Institute of Art (also known as the Mia), where her art can be found.

Rachel Breen: The Labor We Wear from Minneapolis Institute of Art on Vimeo.

Influenced by the tragedies of the Triangle Shirtwaist Factory Fire of 1911 in New York City and the Rana Plaza Collapse of 2013 in Bangladesh, the white shirts hanging from the ceiling represent the 1,287 lives lost during these events. She explains that she chose white shirts because individuals of the Jewish faith (of which a large population can be found in NYC) and people from Bangladesh are buried in white.

“They’re one story about how garment workers have been exploited throughout history and across borders,” Breen says.

The people working in Rana Plaza were working under the same kind of conditions that the people of the Triangle Shirtwaist Factory were working under—underpaid and unsafe. The demographics are similar: poor, rural people who came to the city for jobs so they can feed their families and send their kids to school (as quoted in the Mia interview).

She sourced her materials for this art exhibit from the secondhand store Goodwill in the Minneapolis-Saint Paul area in order to connect us to the present moment.

“This story continues; it’s not over,” Breen stresses. “Garment workers continue to be exploited and we are wearing, every day, the fruits of their labor.”

Now that many stores are closed, and shopping has shifted online, she has an idea to prevent an over-saturation of the the fast-fashion market: mend and remake. Instead of throwing away old clothes, give them new life. In an era where we have more leisure time at hand, skills such as embroidering and darning are easy to learn. And by learning how to upcycle your clothes, it will benefit the environment and protect those working in the garment industry.

Breen also recommends holding the companies that made your clothes accountable.

“Hashtag your garments and send it to the brand,” she says, “asking them how it was made.”