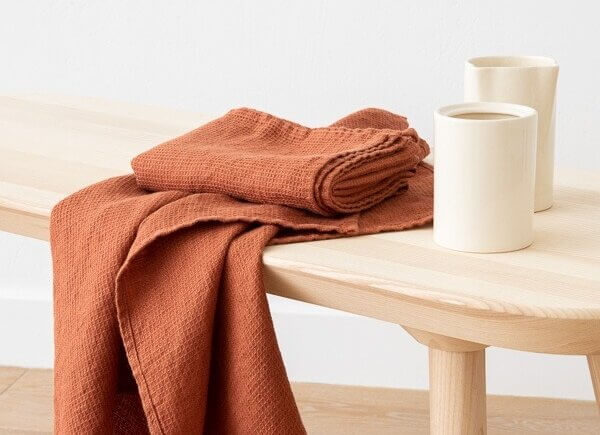 Interior Design Reimagined: From Ancient Fiber to Textile Ideal for a Sustainable Tomorrow

We are dealing with an outstanding fiber with benefits that have been appreciated for ages. However, can linen withstand the changes and test of time to be considered modern?

Linen has many modern applications partly because its characteristics from antiquity are still recognized even today, as the simple fact that it does not absorb humidity as readily as cotton and that it is naturally wrinkled, but with some technical performance criteria like it being waterproof, crease-resistant, offering impressive protection from UltraViolet rays. Today, linen has a sporty and more modern appeal to it, all thanks go to its ability to blend with most other fibers as well as its special finishing techniques. In fact, the industry creatives have made a resigned linen characterized by its melange effect. From just a simple linen fabric to more intricate shapes such as linen sheets, curtains, tablecloth, it has it all.

When linen landed on vogue, we had no one else to give credit to but the younger, environmentally conscious consumers. Even better, the creative minds in linen supply chains keep developing new production methods to come up with new products like winter linen, fluoride and formaldehyde-free waterproof linen, stretch linen, and decorated linen that supports specific digital printing techniques. At this point, you can forget about all textiles that went out of fashion: today’s linen is the most innovative we have ever seen, naturally sustainable and stands proudly against the test of ages.

Linen is one of the most versatile fabrics out there. It can be used in more than one way, with sturdiness perfect for both industrial and upholstery products. Curtains, tea towels, tablecloths, and bedsheets are common-sight household items made from linen. Also, linen has been utilized as canvas material for many oil paintings by artists. Linen was actually part of the materials that were used to make the U.S. dollar bill! You can also wear woven linen to a soft, breezy finish, something that makes it ideal for anyone’s summer wardrobe.

First off, did you know Linen is produced from flax? Yes, and it’s an extremely versatile plant. Every part that makes up flax plants has one or more uses, and all parts have been used in the production of worthwhile products – nothing goes to waste, and the production process is impressively cost-effective. One of the by-products thrown off the assembly line in flax processing is Linseed Oil, one of the best wood preservatives out there, particularly in varnishes. Another thing you probably didn’t know is that Flax is highly resilient and can easily grow in some of the poorest soils on the planet, using far less moisture than cotton.

The UN-FAO (UN- Food & Agriculture Organization) recognizes that flax requires thirteen (13) times fewer treatments and pesticides than Irish potatoes, yet it is only about 1 percent of the planet’s apparel fiber usage.

Just how eco-friendly is linen? Here are reasons why

Flax is a plant that grows naturally. It requires no extra water besides rainwater, something that makes it one of the eco-friendliest fabrics available

Because it is a natural fiber, linen is both recyclable and biodegradable

The entire flax plant is usable in one way or another, leaving no chance for wastage

According to the assertion of the European Confederations of Hemp and Linen, flax is friendly to the environment and can be used to preserve land

Linen yarn is strong by nature, which means manufacturers don’t need to incorporate the starching process during weaving and spinning

Linen fabric can be easily recycled into insulation materials and paper used in the car industry.

If you compare flax linen to cotton, it comes out to be several times stronger, meaning clothing, upholstery, and window hangings made from linen are made to last, instead of ending up in landfills within a short time.

Other benefits of linen

Besides being the most stylish and biodegradable fabrics ever seen in fashion history, linen is inherently moth resistant. Note that although this fabric is fully biodegradable, it is still made of flax plant fibers, meaning it must be untreated (i.e. free of dyes) for it to be biodegradable. It also comes with impressive natural colors including ecru, ivory, grey, and tan.

Linen can withstand great temperatures, making it one of the fabrics you would generally use for lounging on a hot tropical island or raiding the jungle. It absorbs more moisture without necessarily holding bacteria. In fact, it is actually stronger when wet with water than dry and can become more soft and pliable the more you wash it. It just gets better and better!

And on the dark side…

Linen’s production process takes a lot of time and a fair share of work. As such, linen can be expensive to produce (remember, we earlier mentioned it’s only cost-effective when you consider that no part of the flax plant goes to waste – that and that only)

Organic linen isn’t the easiest to find either. Although according to the words of Bead & Reel, “much of the linen made in China is grown with several agrochemicals and their processing method also tends to higher impact, Japanese and European linen is more natural and involves low impact methods… as a manufacturer or consumer, you can also be confident that high-quality linen from Japanese and European mills is a sustainable choice”.

Another flaw of linen has something to do with its fibers – because the constituent fibers lack elasticity, they are prone to break along any permanent creases that form over time. This is something you should be mindful of with respect to parts that are always bending or creasing, such as the region where the collar of your shirt folds down.

Also, the wrinkling may be a con at times – you need to be careful and choosey with the kind of garment you settle on.

Every part that makes up flax plants has one or more uses, and all parts have been used in the production of worthwhile products – nothing goes to waste, and the production process is impressively cost-effective.