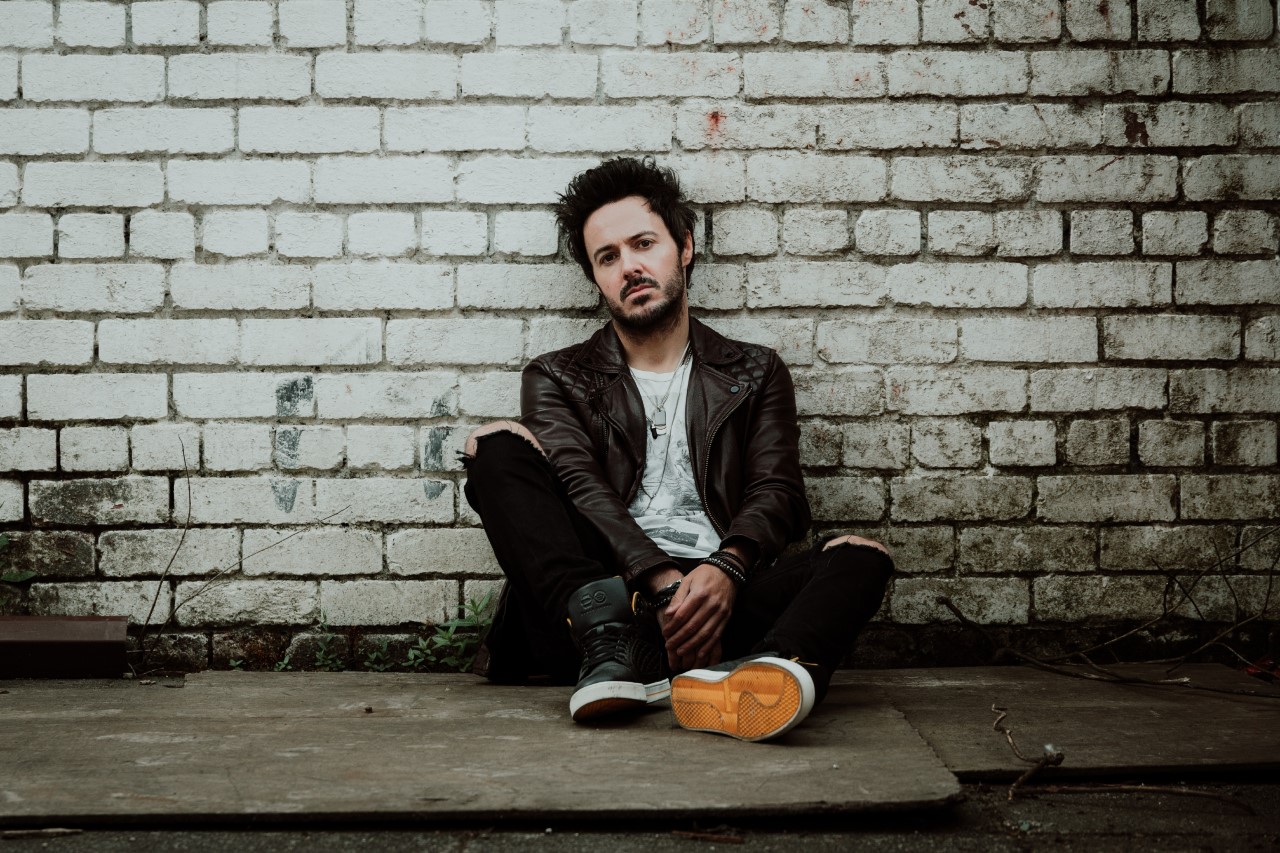 Singer, songwriter and author James Kennedy (who once fronted rock band Kyshera, but now releases music as a solo artist) has been involved in music since he was little more than a child. He released two rock albums with Kyshera, and has produced a further three solo albums. Alongside this, he has written a book about his experiences of the music industry – an expose of the ups and downs he has faced to survive the challenges thrown his way.

With new projects being released and Kennedy seeming busier and more creative than ever, I thought it would be a good time to catch up with this unique talent, and find out what’s been going on for him…. 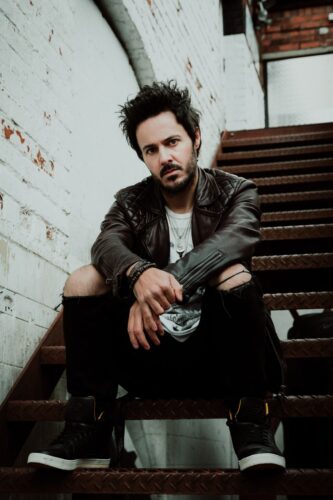 Hi James! Can you tell us more about your new album, and what inspired it?

For me, it’s a return to where I started. My last album ‘Home’ was a major change in direction for me and was much more of a personal exploration through music of a lot of (mostly bad) things that I was going through at the time. But this new album is a return to the days in my former band ‘Kyshera’, which means fuzzy guitars, pounding drums & lots of politics. It was written out of a growing anger & frustration at what was going on pre- covid…Brexit, Trump, Boris Johnson & the Corbyn debacle. I wanted (needed) to make an album that was a scream for some sanity, which is why I called it ‘Make Anger Great Again’ – little did I know that just a few months after recording it that the whole world would seem to be in a state of panic, chaos & violence.

Can you tell me a bit about your approach to song-writing: what’s your process and what are the biggest obstacles for you?

I’m now on my 7th album so I have a pretty well formed process which has developed now and it’s this – I archive those spontaneous flashes of inspiration (melodies popping into my head whilst driving, lyrics, riffs or whatever) by singing or talking them into my phone and then I leave them to ferment in the back of my mind for however long it takes until a vision for a full song develops. I find that approach works best for me, rather than ‘working’ on a song or forcing it, I find the best ideas are the ones that just come in to your head when you’re not expecting it – and then I build the rest of the song from there. Seeking constant new forms of inspiration, whether it’s music or whatever, can help to stop the creative taps from seizing up too.

The biggest headaches for me when songwriting are trying to make the lyrics fit the melodies. I always do the ltrics last and I take my lyrics seriously so I always have a struggle with saying what I want in the song whilst being constrained in my word choice by the rhythm and meter of the melody.
Who did you work with on the album? Was it a smooth process all in all?
I did the entire album by myself. I played all of the instruments and did all of the recording and production at my little home studio. The only other person involved was the amazing Jeff Rose who did the final mix and master. It was a blissfully smooth process and the whole thing was written and recorded in about 3-4 months – I picked up the master disc from Jeff on the day they announced the lockdown – so just in the knick of time.
What’s the reception from your fans been to the songs so far? Were you nervous about the release?

So far the response has been amazing, which is a huge relief as this is a very different record to my last one! But my fans are the best in the world and they totally support my constant musical reinventions and I, in turn, hope that it keeps things fresh and exciting for them too, rather than me just knocking out the same album over and over again. But yeah, I’m always nervous about how new material will be received!

The book is called ‘Noise Damage : My Life as a Rock’n’Roll Underdog’ and it’s part music memoir, part expose of the music industry & part personal journey through ups, downs, pain, healing and the lessons learned along the way. It’s basically the rock’n’roll story that never gets told – everyone’s read the cliche rock’n’roll memoirs from the megastar bands but no one has told the story of all the ‘other’ bands – the guys who didn’t make it and what became of them (which is MOST bands!). So I hope it will be an insight into the lives of us mysterious musical folk, an education for young bands and a rollicking good read.

Was it quite therapeutic to write it?

Totally! I’ve written articles before but a book, especially a book about my own life, was a different beast altogether. It was written in about 3 months and I found that it flowed out of me pretty quickly & easily, possibly because I found it quite cathartic to bring some sense of meaning and context to everything I’d done with my life up to that point. Along the way there was upset, anger, forgiveness and many fond memories and by the time I’d gotten to the end, I was much more comfortable with my journey and its disappointments and failures than I was previously.

After this experience, do you think you’d like to pursue writing more in the future?

Yeah, possibly but I doubt I would write a book about myself again. If I was to write another book, it would be non-fiction but covering issues that interest & excite me and don’t touch so many personal raw nerves! I do write articles about various issues on my Medium page and I enjoy doing that.

Tell us about how the coronavirus lockdown effected you? Have you found it challenging over recent months?

I hate to say it but I’ve actually quite enjoyed the world standing still for a bit. I’m quite a private guy who spends 99% of my time working, so not a lot changed for me really when things locked down, as I work from home. Obviously I’m missing performing like crazy and the long term effect of this on my industry is a serious concern. The things that have been hardest for me have been things like having to stay distant from my family and seeing many of my peers in the entertainment industry struggling. But not being able to go to the pub or whatever has not been something that I see as a real problem. That said, I do feel like it’s been long enough now and it’s time for Covid to do one. 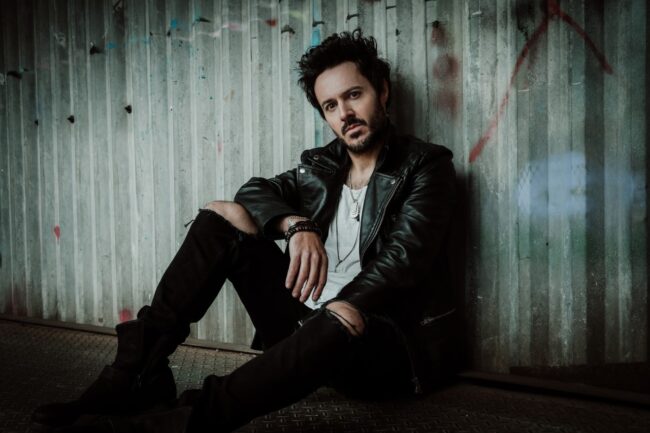 What’s it been like releasing your projects at such a tough time?

It’s been…interesting. It’s taken over a year to get all of the behind the scenes stuff in place in order to get a book published and an album released at the same time, which wasn’t easy and then the world closed down. So that meant abandoning the original plans for the music videos and desperately trying to find a location we could film in, with me doing all of the instruments rather than a full band – and things like book printing, CD pressing and merch have all been a real struggle with all of the factories being closed. Promotion has also been difficult, as has raising the funds to pay for it all. So yeah, all in all, not an ideal time to be releasing anything (let alone TWO things!) but I’m pretty stubborn
and when I decide I’m doing something, I do it ha ha.

How would you describe your sound to people unfamiliar with your music?

Confusing. By this point I now have a very eclectic back catalogue. My albums with Kyshera were very progressive hard rock with electronics and even some orchestral pieces thrown in but alongside those albums, I also released solo records where I got to explore the things I couldn’t do in the band. So my first solo album (9.i.P) was all very experimental electronic instrumental music and my 2nd album (The National Health Service) was all simple acoustic songs.

My first ‘proper’ solo album was ‘Home’ in 2017 which was quite soft rock
and acoustic but then my new album ‘Make Anger Great Again’ is almost a return to the days of Kyshera – heavy alternative rock with highly political lyrics. So I’m a very mixed bag and I can be very confusing for people just discovering me!
Who would you cite as your biggest influences?
Frank Zappa, Nirvana, Jeff Buckley, Radiohead, Squarepusher, Jayz, Pantera, Stravinsky, Dave Brubeck, Allan Holdsworth, Pink Floyd and so, so many more!
What do you think about the internet and the idea behind “cancel culture” I’d love to know your thoughts?
I think Cancel Culture is a very slippery slope. On the one hand I support the weeding out of abhorrent characters from platforms of influence (Harvey Weinstein for example) and creating safe spaces for all but there’s a very real risk of it all going way too far, which I think we’re seeing a lot of these days. I feel like we’re often in the realm of someone ‘not liking something’ so it has to removed and the offending persons life crushed – I think that has a detrimental effect on all of our lives. Especially when applied to the arts or comedy because context, satire, shock, irony or playing devils advocate in order to explore an issue – all of that can so easily get misconstrued as offensive that we run the risk of creating a culture of unfunny, un-edgy, safe, polite, bland art that sucks. At the rate we’re going, we won’t need censorship. So I’m with it in spirit when applied to actual issues that matter – but the daft stuff?…I think some people today need to learn what real problems are.

What is next for you? Any plans for the rest of this year and 2021?

The next few months will mostly be about promoting the album and the book and there’s lots coming up – new videos etc – but after that is going to depend on where things are at with the pandemic. I would LOVE to do some live shows and maybe even a book tour or something but my guess is that that’s likely to be next year now. So in the grey area between now and then, who knows…I might write another book or record an electro Pop album or something ha ha

Finally, can you tell us where we can learn more about you and your work?