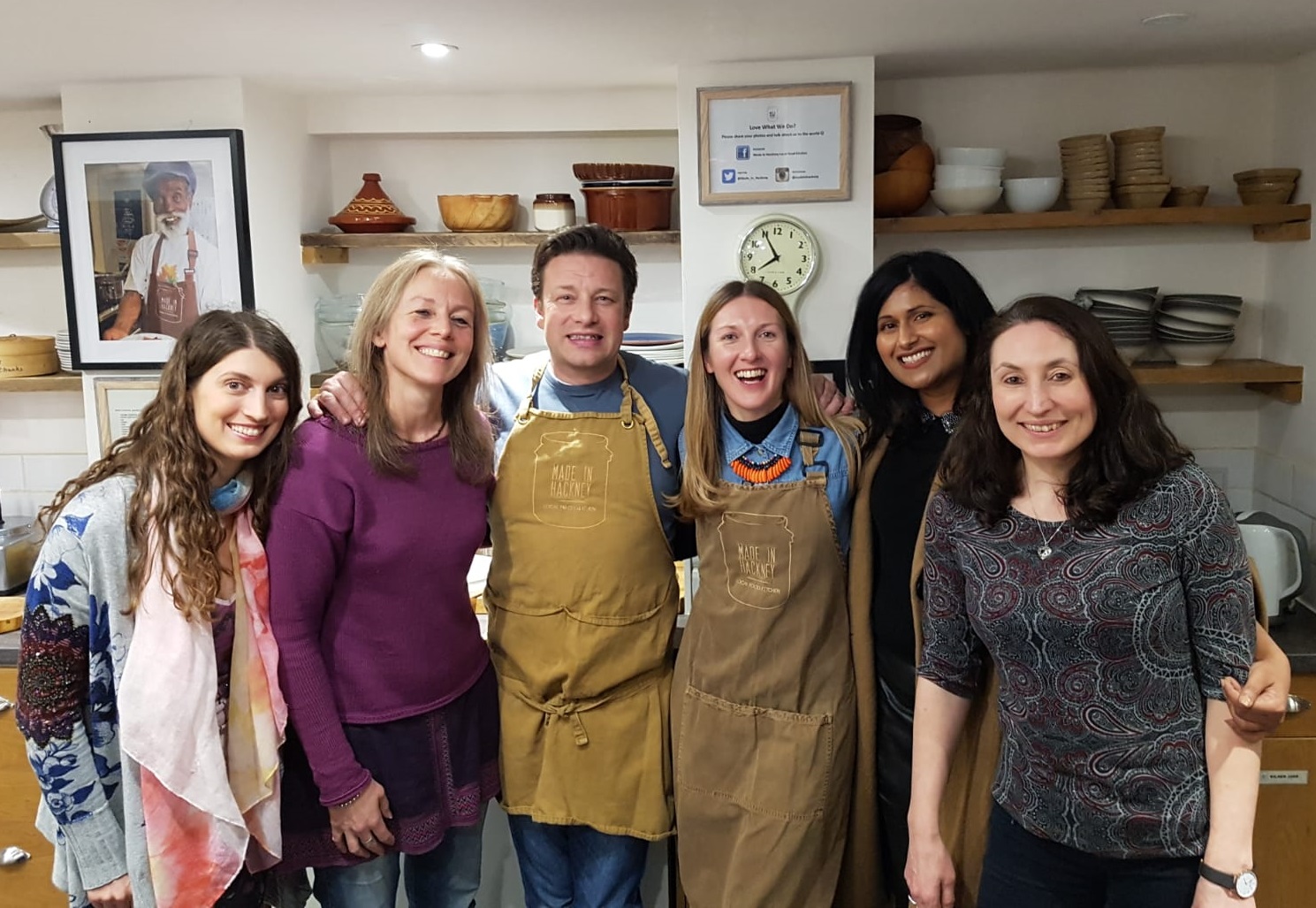 #Passion2Action: Interview with Sarah Bentley Founder of Made in Hackney

Made In Hackney is a vegan community cookery school and charity that started in 2012. Their mission is to inspire and give people the skills to grow, cook and eat more plants – so they can improve not only their health, but the planets too. In pre-covid times Made In Hackney ran cookery classes and courses across London with a huge variety of community groups and tailored each class to their bespoke needs, goals and living circumstances and helped over 15,000 Londoners to embrace wholefood plant-based eating – in all it’s amazing multicultural forms.

Two weeks before lock down started Made In Hackney launched a free direct to door community meal service to help households who would struggle to access food during the crisis – mainly because they needed to shield or because they’d been impacted economically. These meals are delivered by cycle couriers and local volunteers and made by our restaurant partners Angelina’s alongside guest community chefs. They’ve also been doing welfare calls and buddy calls to check in on people and have a friendly chat. This interaction is almost as critical as the meals. You can support this campaign here. 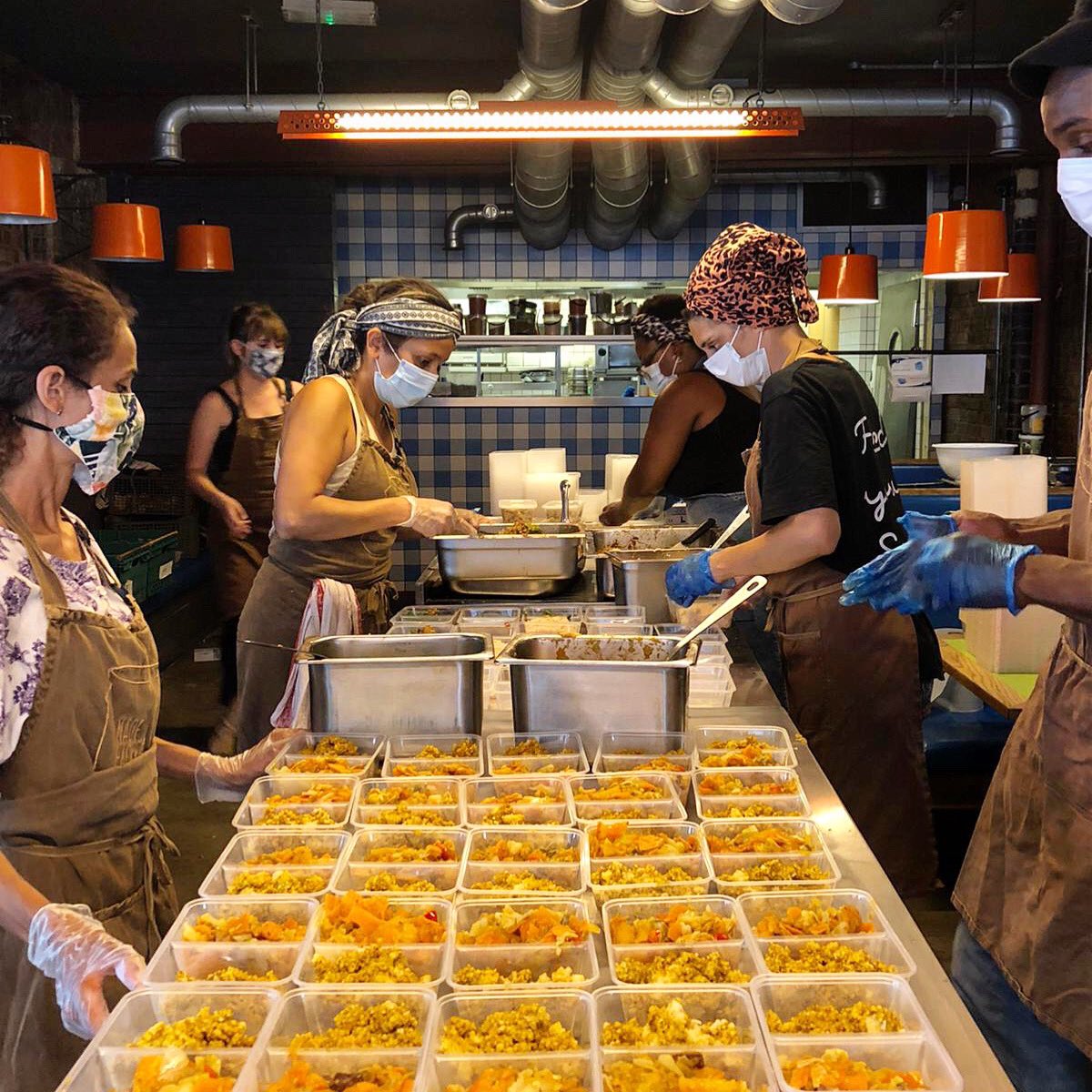 G: What did inspire you to start Made in Hackney?

S: I’ve been vegetarian since I was 9 and vegan since I was 18. I’ve always loved food and cooking and cared about people, animals and the environment. As a journalist writing articles you also wonder if your story changed anything. Or if anyone even read it. After years of this I wanted to do work that was more tangible – where you could clearly see a difference. I experienced myself how switching to a vegan diet not only radically improved my health and wellbeing – but also my mental health. I watched a lot of documentaries about the food industry – big ag, junk food corporations, deteriorating soil health – and it made me furious how corporates were trashing our soil, contaminating our food and promoting utter crap to people that made them ill. I was inspired by activists like Vandana Shiva. I started to form this idea that growing your own or communally growing your own organic food and cooking nutritious plant-based food from scratch at home with affordable ingredients was an excellent way of sticking a finger up to the man and taking control of our health – despite their best efforts to have us behave otherwise.

G: How did you convert your passion into a social enterprise?

S: It all sort of unfolded. I was a journalist for over a decade writing about black music culture – reggae, drum ‘n’ bass and grime. Over time I started writing about social justice issues and movements, the environment, urban farming and my last media job was Deputy Editor of a magazine called ARISE which was all about contemporary African and diaspora culture. After years bashing away at a keyboard I wanted to get outside and work with the land and my hands. I retrained to become a community gardener and became a patchwork farmer for Growing Communities growing zero food miles salad. Whilst on a permaculture course my teacher Rakesh mentioned a local health food shop was looking for someone to help them write a funding bid. That funding bid became the start of Made In Hackney. I worked on the bid for about 3 months with co-founder Joshana Lovage whilst doing freelance work to earn an income. It took almost a year to find out we’d got the grant. For a few years I did freelance journalism and MIH. My role is officially 4 days a week now but of course like most people in the charity sector we all work way more than our paid hours. I also teach special educational needs young people food growing with a charity called The Garden Classroom.

The vision has evolved and developed as different people and wider community – the Made In Hackney family – have poured their energy, ideas and love into the project. But the starting premise of helping people and planet through plant-based eating has stayed the same.

G: What were the biggest obstacles launching Made in Hackney and how did you overcome them?

S: Goodness, many obstacles and challenges. When we were setting up we employed a rogue builder who basically ran off with all the cash without finishing the job and we had to finish it with a team of incredible volunteers. My husband was tiling and doing carpentry at 4am night after night. We had a malicious accusation which got our only grant frozen for a week until the allegations were proven false. Constantly needing to fundraise and earn an income to keep the charity going is exhausting and you can feel like you’re on a hamster wheel. I did the funding bids myself for the first 6 years but this year we were finally able to employ a Development Manager who leads on this now. This has been game changing.

There’s been so many ups and downs and huge challenges over the years. Knowing when to ask for help and seek advice and mentoring is crucial. You can’t possibly do or know everything – you’re not meant to – you need to bring people in to carry the vision forward and all the backstage nuts and bolts that keep it going.

G: What 3 pieces of advice would you give to the people who want to change the world, but not sure how or where to start ?

Be nimble and ready to experiment. Pretty much all the ways we originally thought we would make an income to keep Made In Hackney going haven’t turned out to be how we actually are doing. We’ve constantly kept trying different things – still are doing.

Do what makes your heart sing. Even if you have the best or most innovative idea for change if you don’t want to spend all day – and night – knee deep in it – it’s not going to work.

G: How do you promote your project? What’s your advice for upcoming social activists, how to spread the word about their projects?

S: We use social media a lot to connect with influencers, fellow charities, grassroots community groups and brands who we might be able to work with. We had pro bono social media training to help with this. We do grassroots community events and general vegan food events and festivals to get our name out there. This year we hosted a cookery stage at Plant Powered Expo for the first time which was really exciting – our teachers did 28 demos over 2 days. Was intense. We do talks when we’re lucky enough to be asked. Partnerships are key – linking up with like minded people, thinkers, activists, events and brands to mutually support and grow each other’s work and vision. Also – really boring tip. Invest in your SEO. When we finally did it made a big difference within just a few months.

S: So many. My Dad – for the deeply loving and humorous way he dealt with life and everyone in it. And Jah Spirit – my London Dad – a Rastafarian elder who used to teach ital food classes for Made In Hackney. He always knew the right thing to say to comfort, to support, to uplift and give perspective when you were having a bad time – even when things were really tough for him as well. He was an awesome cook and a mean sweetcorn grower (mine never fruited much to his amusement). They’ve both now passed away and I miss them dearly. 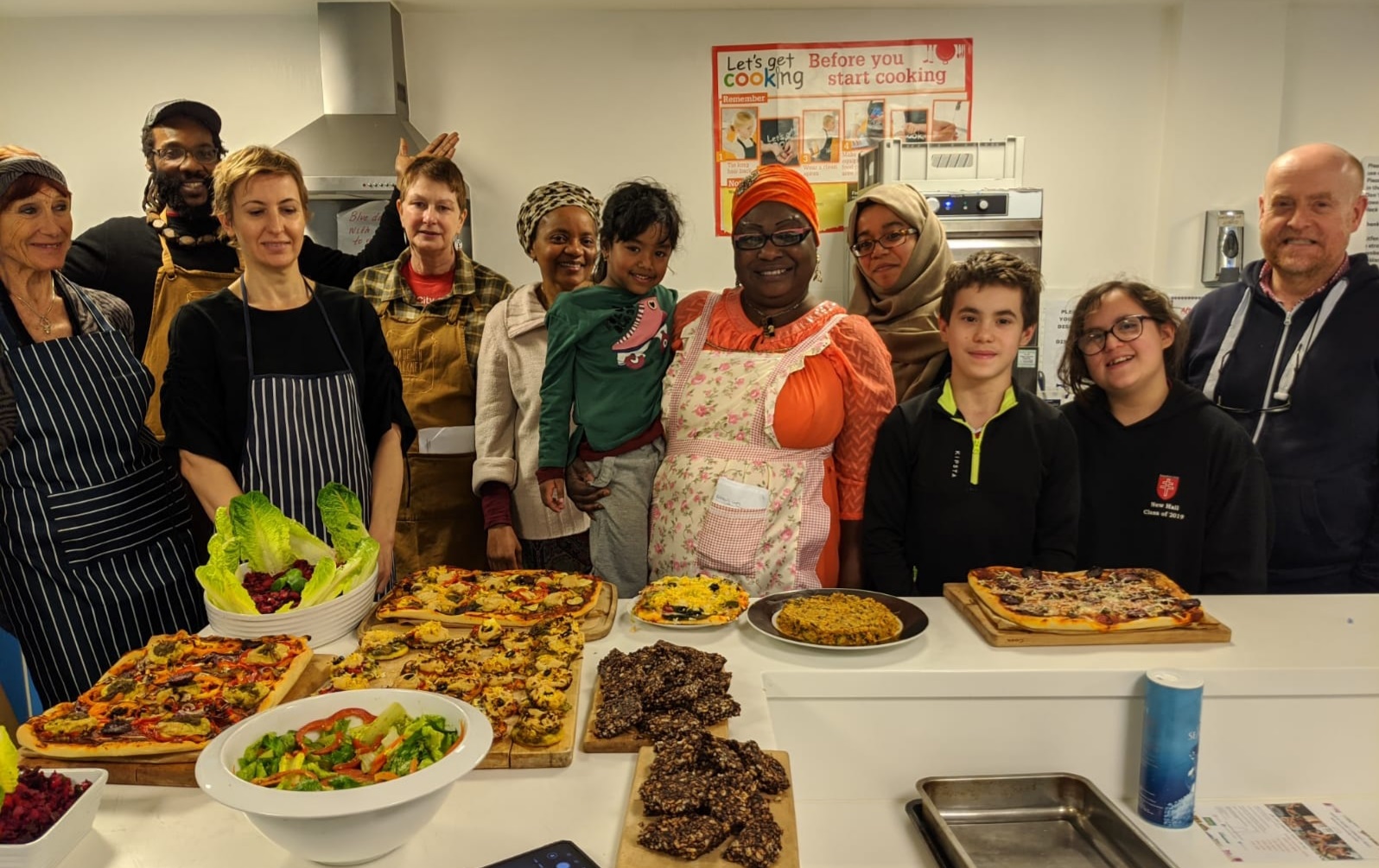 G: Who/what are your favorite CEOs/Businesses in Shoreditch or East London?

Got to give a big shout out to all the East London vegan foodie businesses. Benny from Osu Coconuts – best vegan pancakes and fresh coconuts. He chopped my boy his first fresh coconut when he was a baby and he’s loved them ever since. Benny’s such a grafter. At last year’s UK Vegans Of Colour event Betty from Bettylicious caught him sleeping standing up in the back of his van! Meriel Armitage from Club Mexicana. Absolute legend. Amazing food and done so much great community work during covid lockdown. Carla & Nacho from Black Cat Cafe – vegan cooperative cafe been representing in the vegan food game way before it was trendy. All Nations Vegan House in Dalston – Sister Atreka serves the most delicious ital food and has created such a beautiful, welcoming space. And Vevolution vegan festival – Damien and Judy have done so much to lift up the vegan scene and have done more to help Made In Hackney than anyone else over the years. Such supporters.

G: What do you want to achieve in the next few years’ time?

S: Big picture – help to give thousands more people the skills and inspiration to grow, cook and eat more plants. Create more jobs and livelihoods in plant-based food. And launch a global vegan cookery platform taking all the best of Made In Hackney and making it available to everyone the world over.