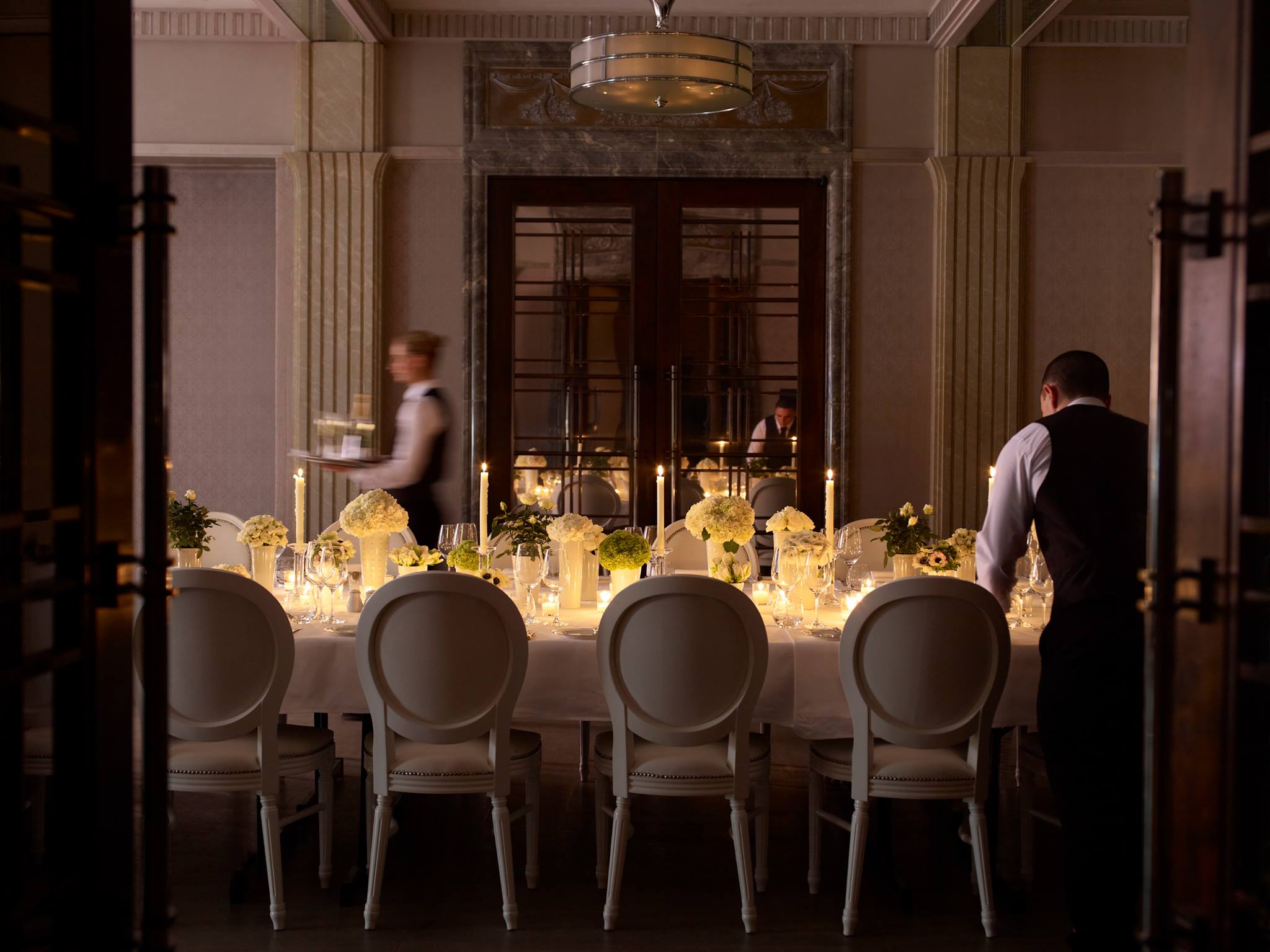 Connaught Bar In London Is Named The World’s Best Bar

The list of The World’s 50 Best Bars 2020, sponsored by Perrier, was announced in an online awards ceremony on 5th November at 3pm UK time. During extensive consultations with industry figures, its Academy Chairs, bar owners, bartenders and partners, the 50 Best organisation received widespread support for releasing a ranking that aims to bind the community even closer together and provide positive news for bars as they enter the next stage of recovery from the global pandemic.

The 2020 list features bars from 23 countries, with 11 new entries spread across Australia, Colombia, Greater China, Italy, Japan, Malaysia, South Korea, Spain, Thailand and UK and the Connaught Bar, London, ranks No.1 in The World’s 50 Best Bars 2020 and is also The Best Bar in Europe.

Other special awards announced in the run-up to the event on 5th November include Tayēr + Elementary, London, secures Disaronno Highest New Entry Award, Kwānt, London, is awarded London Essence Best New Opening Award. The 51-100 list 2020, presented in association with Mancino Vermouth, was released the week before the virtual ceremony.

The 12th edition of the annual ranking features bars from 23 countries and sees London’s Connaught Bar clinch the No.1 spot and take home The World’s Best Bar and The Best Bar in Europe awards.

Under the masterful leadership of Agostino Perrone, the venue’s Director of Mixology, Connaught Bar stays true to its principles of presenting artful drinks with graceful service in an elegant setting. Designed by the late David Collins, the Cubist-inspired bar celebrated its 10th year in 2018 and is known for its unique Martini trolley, where bartenders give a personalised drinks experience to guests.

Mark Sansom, Content Editor for The World’s 50 Best Bars, says: “We want to extend our heartfelt congratulations to all the venues on the 2020 list of The World’s 50 Best Bars. We are continually heartened by the industry’s resilience and positivity as countries continue to operate in varying degrees of recovery. Hats off to Connaught Bar, undoubtedly one of the finest cocktail bars of our time. The institution has earned a place on the list every year since 2010 and it has gradually grown in stature to become the world-beating bar it is today. Ago Perrone and his team are dedicated to excellence and look at every element of the guest experience to choreograph a faultless service. The Martinis aren’t bad, either.”

“We at 50 Best hope that the announcement of The World’s 50 Best Bars 2020 will act as a show of strength for the global bar community. It displays to the world that even in the face of the ever-shifting challenges and restrictions being thrown at them, bars are still doing everything that they can to continue to provide great hospitality experiences. As we move into the next stages of international recovery, it is vital to get the message out that bars are open for business and ready to receive guests safely and securely.”

Elisa Gregori, Perrier International Business Unit Director, says: “On behalf of Perrier – and as the leading partner of The World’s 50 Best Bars and 50 Best for Recovery – we feel proud of the strong collaboration, solidarity and funds we have raised together helping the heart of international bar community. This year, we are particularly proud to show our appreciation to all the bars that have
made the list during such a hard time. The pandemic has heavily impacted the entire hospitality industry and the situation remains shaped by uncertainty, yet the industry is adapting quickly and we believe it will return stronger after these difficult times.”

The UK leads Europe with nine bars on the list and Connaught Bar as The Best Bar in Europe, sponsored by Perrier. London’s Tayēr + Elementary wins Disaronno Highest New Entry Award at No.5 and Kwānt clinches London Essence Best New Opening at No.6. Other London bars on the list include American Bar at No.20, Lyaness at No.29, Swift at No.33, Three Sheets at No.34 and Artesian at No.41. Edinburgh’s Panda & Sons (New Entry) completes the UK’s showing at No.32.

Greece sees two bars from Athens on the list, The Clumsies with a record-high position at No.3 and Baba au Rum at No.31; while Spain takes three spots with Barcelona’s Paradiso at No.19 and Two Schmucks (New Entry) at No.26, as well as Madrid’s Salmón Gurú at No.22. Italy boasts two bars, with Milan’s 1930 at No.25 and Rome’s Drink Kong (New Entry and last year’s Campari One To Watch) at No.45.

France, Russia, Norway, Sweden and Germany each have one bar on the list, with Paris’ Little Red Door at No.24, St Petersburg’s El Copitas at No.27, Oslo’s Himkok at No.30, Stockholm’s Tjoget at No.36, and Berlin’s Buck & Breck at No.37.

New York’s Dante is The Best Bar in North America, sponsored by Asahi Super Dry, at No.2 in the global ranking. Four other bars from New York make the list this year, including Attaboy at No.12, Nomad Bar at No.13, Katana Kitten at No.16 and Employees Only at No.38.

Florería Atlántico in Buenos Aires places No.7 and is named The Best Bar in South America, sponsored by iichiko Saiten. This is followed by Mexico City’s Licorería Limantour at No.17, Lima’s Carnaval at No.21, Cartegena’s Alquímico (New Entry and Ketel One Sustainable Bar Award winner) at No.47 and Buenos Aires’ Presidente at No.50.

Singapore’s Atlas at No.4 is The Best Bar in Asia, sponsored by Rémy Martin. Also from Singapore, Jigger & Pony places No.9, while Manhattan and Native take No.14 and No.18 spots respectively.

China leads the way in Asia with five bars on the list, including Hong Kong’s Coa at No.8 (Nikka Highest Climber Award) and The Old Man at No.15. Shanghai’s Sober Company is placed at No.42, and from Taipei, Indulge Experimental Bistro is at No.43 while Room by Le Kief (New Entry) enters the list at No.46.

Australia places three bars from Sydney, with Maybe Sammy taking The Best Bar in Australasia, sponsored by Torres Brandy, at No.11; Cantina OK! (New Entry) at No.28; and Bulletin Place at No.39.

From United Arab Emirates, Dubai’s Zuma is The Best Bar in the Middle East and Africa, sponsored by Matusalem, at No.23.

Ashtin Berry from the US is named the Roku Industry Icon. For this award, the 540-strong voting Academy is asked to give the name of one person who has done more for the progress of the bar industry than any other individual. Berry is a hospitality activist and educator, dedicated to creating safe and equitable workspaces in the bar and restaurant sectors. She is a celebrated bartender, a WSET Level Three sommelier and founder of Resistance Served, an annual food and beverage symposium focused on positive progress in the hospitality industry.

Tayēr + Elementary in London secures the Disaronno Highest New Entry Award and ranks at No.5 on The World’s 50 Best Bars 2020 list. The award is given to a bar entering the list at the highest position for a new entry. Co-owned by industry legends Monica Berg and Alex Kratena, the drinks at Tayēr + Elementary are approachable but multi-layered with unexpected flavour combinations. Elementary is a casual, easy-going space with floor-to-ceiling windows, serving cocktails on tap, beer, wine, coffee and snacks. Behind the concrete partition is Tayēr, a darker, moodier, more serious space, where drinks have no names; rather they are simply displayed as a list of ingredients.

Also from London, Kwānt wins London Essence Best New Opening at No.6. This award is given to a bar with the highest position in the list that has opened in the last 18 months. The subterranean spot

was founded by Erik Lorincz, famed for his work at The Savoy’s American Bar. Head through the Moroccan-styled restaurant to an unassuming door, which gives way to striking tropical décor. Perfectly attired bartenders serve up Lorincz’s carefully curated drinks list, including the selection of ‘Japanese Highball’, spritzes and classical twists that showcase inventive combinations of flavours using Lorincz’s storied collection of vintage spirits.

Coa in Hong Kong takes the Nikka Highest Climber Award, rising 41 places to claim the No.8 spot. Named after the machete-like tool for harvesting agave, the Mexican-inspired cocktail bar was a game changer for the city when it opened in 2017, with a menu that focuses on 100% agave tequila, traditional mezcal and cocktails inspired by the flavours of Mexico.

High Five, Tokyo, is named Heering Legend of The List. This award is given to a bar that has performed most consistently in the list since its inception and can only be won once. A basement in Ginza is home to Hidetsugu Ueno’s famous ice-carving prowess and sophisticated cocktails. The combination of Japanese bartending techniques plus modified classic recipes has resulted in High Five being a regular in The World’s 50 Best Bars list since it opened a decade ago.

Alquímico (New Entry), Cartagena, clinches the Ketel One Sustainable Bar Award. Spanning two storeys and a rooftop, this new entry at No.47 showcases a cocktail selection that is prepared with experimental techniques and local ingredients, as well as a sustainability programme that is the first of its kind. In March 2020, the team at Alquímico, led by bar owner Jean Trinh, travelled more than 800km to undergo agricultural training at its own farm. The team planted aromatics and citrus trees and built a research and development centre, so that crops can be harvested and harnessed at their freshest for syrups, distillations, tinctures, infusions and more. Keeping sustainability in mind, the team also aims to generate more than 90% of the energy needed for the farm from ecological sources.

For 2020, 50 Best made a number of changes to its Academy structure, which now includes more than 540 anonymous industry experts who cast the votes to create the list of The World’s 50 Best Bars. The Academy is 50/50 gender balanced; there are 20 Academy Chairs in 20 new geographic regions, and the voting process and results are independently adjudicated by Deloitte. For this year, the voting period ran from January 2019 to March 2020, when the majority of bars were forced to close due to the pandemic. For more information about the structure of the Academy and the changes this year, please see this update.