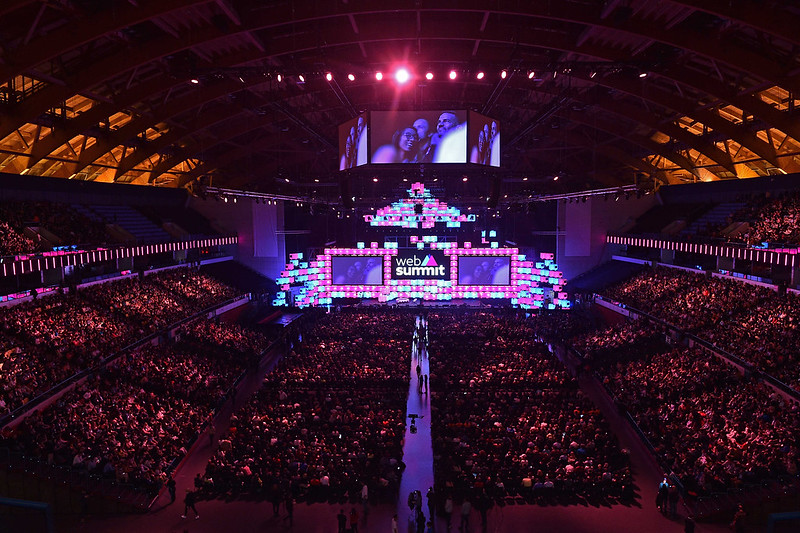 5 November 2018; A general view of Centre Stage ahead of the Web Summit 2018 Opening Ceremony at the Altice Arena in Lisbon, Portugal. Photo by Sam Barnes/Web Summit via Sportsfile

Today, Web Summit’s online conference has kicked off with 104,328 attendees and counting from 168 countries.

This year’s Web Summit is being hosted online on the company’s own proprietary software, coined by Digital Trends as “the​ future of online events”​. Among​ the audience are 1,137 speakers, 2,229 journalists, 1,145 investors, 2,007 startups and 169 partners confirmed to participate. Here are some highlights.

Numbers are increasing each minute but, at the time of writing, Web Summit has registered 104,328 participants. Web Summit has never been more global than it is now that there is no barrier to participation, bringing in 30,000 more attendees than were at the physical event last year. The event is geographically diverse, with 168 countries represented.

The gender ratio remained stable compared to last year – 45.8 percent of attendees at this year’s event are female.

Once again, Web Summit has selected more than 2,000 startups to attend the event and take part in pitching competitions, roundtables and masterclasses. This year’s startup group represents 89 countries, showing a shift away from the Silicon Valley-centred view of tech. Top participating countries this year include the United States, Canada, Brazil and Mexico.

The strength of the platform lies in its focus on networking. As well as the 679 talks across five channels, Web Summit will also host 290 roundtable sessions, 154 masterclasses, 70 Q&As and 900 pre-scheduled investor hours. Attendees can also take part in three-minute roulette-style speed networking sessions through the Mingle feature.

Rreflection of the growing interest in politics and policy making, Web Summit this year has drawn in presidents, prime ministers, governors, mayors, ministers, ambassadors and commissioners from all over the world. Among the 1,137 speakers are the current prime ministers of Portugal, Spain, Greece, Cape Verde, Saint Lucia, Luxembourg, and Antigua and Barbuda; the former prime minister of Australia; the president of the European Commission, Ursula von der Leyen; the mayors of Lisbon, Toronto and London; and the governor of Tokyo.