In follow up to last weeks peek inside the mind of Sam Gomez, we’re back chatting about the latest edition to spring’s lineup at ILLUSTRATED 2015. This week meet Chilean illustrator Alvaro Tapia Hidaglo.  Turning professional as recently as 2011 he already enjoys a steady stream of highbrow clients, recently completing creative briefs for Wired Magazine, Rolling Stone, Harper’s Bazaar, The New Yorker, Washington Post and Forbes.  With a serious knack for capturing people ‘in the moment’ he uses a range of traditional and digital techniques to create visceral portraits bursting with energy. His most recent series is the hugely impressive ‘Angry People’ which unsurprisingly does exactly what it says on the tin. Utilising a savvy bit of PR strategy he asked his Tumblr fans to submit angry photographs of themselves which were then subsequently crafted into a series of wonderfully kinetic studies capturing some very primal qualities. Intrigued to find out more we interviewed him earlier this week …

Your work is highly viceral and often packed with emotion, what inspired you to develop such a dramatic style and what drives you to dig beneath the surface of the human condition to capture this raw quality ?

I’m interested in exploring the dramatic and sinister. My motivation is inspired by artists such as Francis Bacon and L.S. Lowry, whose portrait “Head of a Man” has had a great impact on me.  When I was younger attending Roman Catholic school I often picked up on religious images of suffering saints and virgins, these images are still deeply engraved in my mind. I explore the contradictions and liberation that comes from great emotional tension, striving to discover beauty in the grotesque and subsequestly using this to emphasis emotion.

The intensly vacant faces of  some of my subjects offer a dramatic look that reflects deep loneliness and internal conflict. Eyes convey feelings of anguish, disbelief and rage. The lack of expression becomes expression itself even when their expression is controled I like to show this internal conflict. Empty eyes help to convey this weird, deranged feeling. 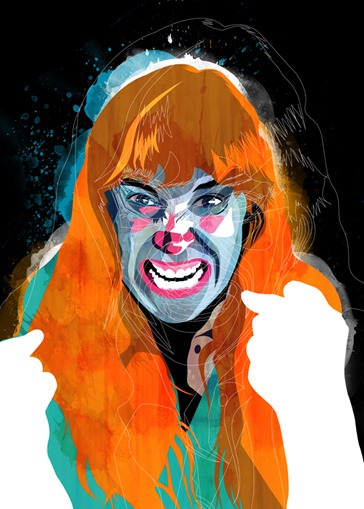 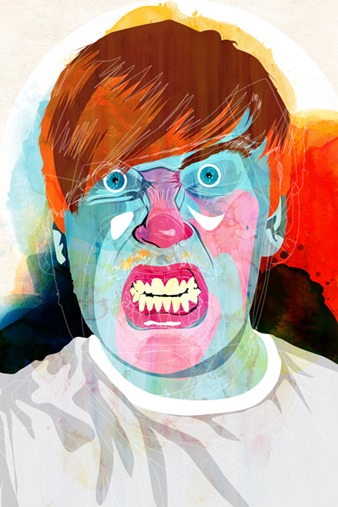 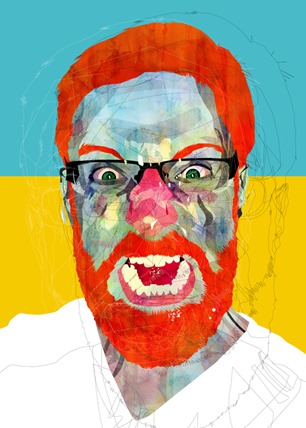 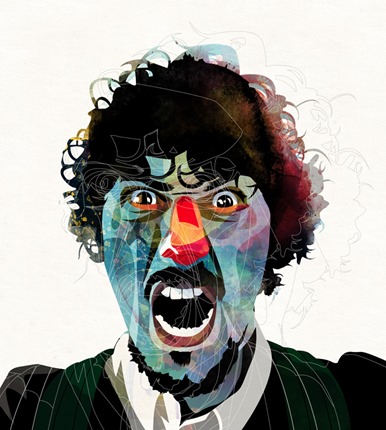 2.  Your dynamic use of colour accentuates your frequently macabre and uneasy portrayals, your layered illustrations seem to suggest we all have dual personalities.  Do you think we all hide elements of ourselves, are you keen to expose these hidden sometimes dark secrets ?

Indeed, my work is based on such duality – a dark inner contrasting with a colorful surface. It is a mixture of abstract and figurative elements; built up using mechanical and hand-made processes (digital vs. analog).

I am very interested in the contrast between a dark, sinister image and saturated, brilliant color. I think this contrast adds attractiveness and impact to the image. I am not interested in creating a realistic portrait of the character, but in expressing the energy they contain within, their internal scream. I’m attracted to the force of this vehement liberating gesture, releasing anger, impotence, vindication, demonstrating the existence of a wild side, etc. I want to stress this duality of the human being. Sometimes the character’s face is portrayed in a passive mood, but I superpose this internal shriek as paths or strokes. As Jekyll & Mr. Hyde.

You’ve completed various commissions for some of the worlds top publications and journals, what is it about your work that attracts such a prestigious client base ?

Can’t tell, it is a mystery to me. Prestigious magazines usually commission portraits. I think it may be the flexibility of my style to portray characters. It may sound contradictory, but the style allows me to create quite concrete works. Another factor may be the visual impact derived from my color selection and the abstract background that complement the portrait. Finally, my work can also be interpreted as an altered reality, (in the sense of an intervened reality) since I am not trying to produce a cartoon of the character I reamain objective.

You’re style strikes a balance between pop-art and fine art while also managing to retain the maturity of an anatomy study, when begining a new piece, where do you start ?  Is it an organic unfolding or do you know what the finished piece will look like from the outset ?

I like to think my work is based on collage rather than drawing, a process of image manipulation and production methods layered over existing frameworks.  My work begins with a foundation, a structure constrained by an existing image. Then I distort it, fragment it, multiply it, alter it and combine it with other elements and materials. In this sense its organic, a trial-and-error exercise, I usually don’t know where it will take me.

The stimuli that trigger these ideas are involuntary, although I have observed myself selecting and channeling them. Guess I’m just open to an ever-changing process.

How do you see your work developing over the next 5 years ?  As you continue to complete more commercial work do you think this will hinder your exploration of the human psyche as you strive to retain commercial appeal ?

My work is an ongoing study of learning and experimentation which I’ve so far been able to apply to commercial contracts and am flexible enough to produce different lines of work when neccessary.

As I’m also exploring hand-made techniques (without digital intervention) my hope is this may lead to a new line of work that may complement or enrich my current practice.

I consider myself lucky to enjoy so much freedom in producing my commercial assignments as clients seek to find my personal point of view in the pieces I do for them. I started to work as a professional illustrator in 2011, so still have lots to learn, explore and discover.

Looking forward to participating in ILLUSTRATED 2015 at The Old Truman Brewery, I’m very happy to be participating in such an event! Also preparing an individual exhibit of the Angry People series in May at the EBK Gallery in Hartford, Conneticut, USA while working on some fashion and product design projects too.

As a celebrated illustrator featured in hundreds of online and print magazines he’s set to join an already tantalising line up at ILLUSTRATED 2015 this May.