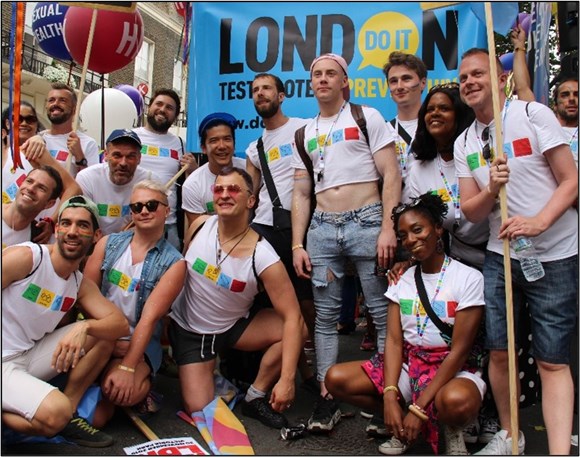 London Pride is back with its first in-person parade since 2019. It is also a historic occasion, marking 50 years since the first event took place and the London HIV Prevention Programme (LHPP) will be there with a variety of activities promoting better sexual health.

The LHPP’s sexual health promotion service, Do It London, offers rapid HIV tests and free condoms and lube to gay and bisexual men in pubs, clubs, and saunas across the capital alongside the latest advice and information on sexual health.

However, for London Pride this year, Do It London’s outreach team will be marching in the parade and setting up a health promotion stand where HIV testing, condoms, and sexual health advice will be on offer.

Furthermore, in relation to the ongoing MPXV (monkeypox) outbreak, the LHPP have been supporting the UK Health Security Agency’s (UKHSA) response in the capital and London Pride will be an important community event where awareness of the symptoms and how to get support will be shared to key groups.

The impact of the LHPP’s work – as well as other community leaders, organisations, activists, and clinicians – have been significant in recent years. London’s success at reducing HIV rates have outpaced other parts of the country and since 2014 new diagnoses of HIV in London have decreased by 63% (from 2,556 in 2014 to 955 in 2020).

Despite the encouraging downward trend of new HIV diagnoses, late diagnoses remain a public health challenge. In 2020, 42% of those diagnosed with HIV were classified as late (% of CD4 count <350). Furthermore, the latest data informs us that there is an estimated 1,650 people living with an undiagnosed infection in London.

For London to reach the national government and regional Fast Track City ambition of zero new HIV infections by 2030, it is key those living with an undiagnosed infection are tested for HIV and commence treatment promptly.

The London HIV Prevention Programme is determined to continue reaching key communities disproportionately affected by HIV with the message that HIV is preventable, that an HIV diagnosis is treatable, and that treatment acts as prevention.