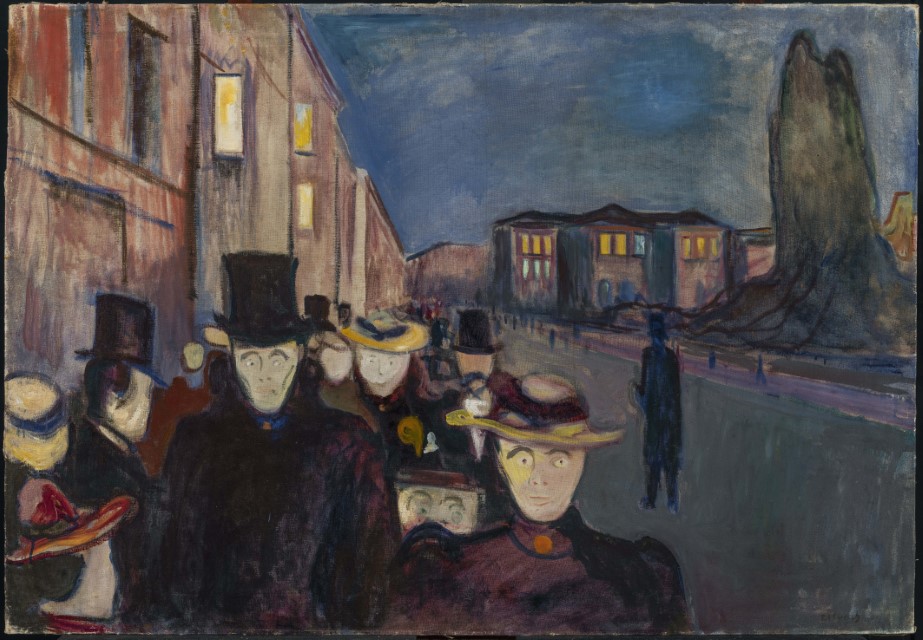 An unprecedented opportunity to see major works from one of the world’s great collections of Edvard Munch, providing an exceptional account of his artistic development.

A collection of significant paintings by Edvard Munch (1863-1944) have gone on show together for the first time in the UK in a new exhibition at The Courtauld.

The Morgan Stanley Exhibition: Edvard Munch. Masterpieces from Bergen showcases 18 seminal works by Munch on loan from KODE Art Museums in Bergen, Norway – home to one of the most important Munch collections in the world. The exhibition follows The Morgan Stanley Exhibition: Van Gogh. Self-Portraits, one of the most highly-attended exhibitions in The Courtauld’s history.

Seen together for the first time outside of Scandinavia, the collection presents an exceptional overview of Munch’s development as an artist, providing a rich and comprehensive account of his journey from the early breakthrough pictures of the 1880s which launched his career, through to the expressive and psychologically charged works of the 1890s for which he became known.

The remarkable collection was formed at the beginning of the 20th century by Norwegian industrialist and philanthropist Rasmus Meyer (1858-1916). An early champion of Munch’s work, Meyer knew the artist personally. He astutely acquired major canvases that chart the development of the painter’s unique expressive style that marks Munch as one of the most radical painters of the 20th century. At the time of Meyer’s death in 1916, the canvases encompassed what was then the most comprehensive documentation of Norwegian contemporary art in any collection and the largest single group of works by Edvard Munch. The collection was gifted to the city of Bergen in 1916, and housed since 1924 in a purpose-built gallery in the heart of Bergen, part of KODE Art Museums and Composer Homes.

The exhibition at The Courtauld begins with important early paintings from the 1880s, when Munch was drawing on social realism, Naturalist techniques, and the legacy of French Impressionism to create his own style. This is exemplified by the artist’s first major work, Morning (1884), painted when he was just twenty years old. Despite being controversial at the time for its unconventional style and its intimate subject, the picture helped to establish Munch’s critical and public recognition as a modern painter and was exhibited at the Paris World Fair in 1889.

Another early highlight in the exhibition is Munch’s large-scale canvas Summer Night. Inger on the Beach (1889), a powerful and evocative depiction of his sister Inger sitting by the shoreline of a fjord. This pivotal work has long been celebrated as the painting with which Munch found his artistic voice. Summer Night marks his move towards the expressive and psychologically charged output for which he became famous.

These early paintings launched Munch’s career in Norway and internationally and set the stage for his ground-breaking paintings of the 1890s when his compositions became powerful projections of his emotions and psychological state. Major examples of these 1890s works form the larger part of the exhibition. Instantly recognisable by Munch’s highly expressive handling of paint and rich colour, they include remarkable canvases from the artist’s famous ‘Frieze of Life’ series, such as Evening on Karl Johan (1892), Melancholy (1894-96) and By the Death Bed (1895). Munch’s ‘Frieze of Life’ canvases were intended to address profound themes of human existence, from love and desire to anxiety and death. The artist used his own experiences as source material to create visceral depictions of the human psyche, which he hoped would help others understand their own life. Munch’s ambition to create paintings that operated on a deeply emotional and psychological level, marked him out as one of the most distinctive voices of modern art at the turn of the 20th century.

The exhibition also includes Self-Portrait in the Clinic (1909), one of Munch’s most impressive and introspective self-portraits, painted when he was undergoing treatment for emotional stress in Copenhagen. This powerful work marked a significant and lasting shift in Munch’s style, as he adopted a brighter palette and started applying paint with loose, jagged brushstrokes that left parts of the canvas visible. Munch deployed this new approach to remarkable effect in Youth (1908), one of the paintings Meyer acquired directly from the artist. Its near-life sized depiction of a naked young man on the beach is full of a renewed sense of vitality that characterised Munch’s work at this time.

Edvard Munch. Masterpieces from Bergen is presented in The Courtauld’s Denise Coates Exhibition Galleries and is the second in The Morgan Stanley Series of temporary exhibitions at The Courtauld. The Courtauld’s permanent collection of Impressionist and Post-Impressionist masterpieces, on display in the adjacent newly refurbished LVMH Great Room, provide rich context for the exhibition, revealing some of the artistic inspirations Munch encountered during his experimental years in Paris from 1889 – 1892, where he discovered the modern styles of Gauguin, Toulouse Lautrec and Van Gogh.

The exhibition is the result of a partnership which saw The Courtauld and KODE presenting Paul Ceìzanne: Masterpieces from The Courtauld in Bergen in 2021.