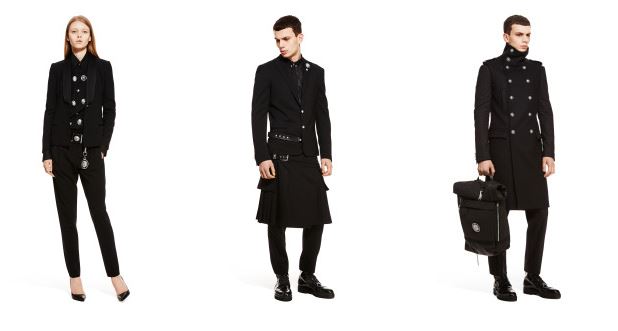 Versus Versace AW15 Presentation in Shoreditch

A short while ago if anyone was to suggest that Donatella Versace would be partying at the Truman Brewery on Brick Lane we’d probably just laugh about it. Not that there is anything wrong with that. Truman Brewery and the surroundings are one of the most influential places in London in my opinion and I am sure that it inspired most of you too just like it inspired me and continue to do so. In addition to that, it’s the home of Fashion East. The platform that has helped and is still helping the greatest designers of London by providing them a platform to show their collections. If you don’t believe me have a look at the alumni!

Going back to the title topic, Versace that is, younger line of the Italian power house Versus Versace showcased its AW15 collection to the world live from The Truman Brewery, first full collection under the creative direction of Belgian-Italian designer Anthony Vaccarello.

For some reason when I think about Versus Versace ‘digital’ is one of the words that comes to my mind. Not sure how much M.I.A has to do with that or whether its due to FKA Twigs wearing Versus Versace for her Google Glass video but for me digital is in the DNA of the brand and the presentation was nothing short of that!

The route that led us to the main show space was covered with Versus Versace tape which said #VersusVersace aka a call for digital engagement encouraging the attendees to share their experience by using the hashtag. Not that anyone needed that. Since it was the hottest party of the week I guess everyone was keen show that they were present at the event and who can blame them and who can blame me?

Top floor of The Truman Brewery, made famous by David Beckham’s underwear campaign, was transformed into House of Versus Versace with massive screens covering the room which showed the campaign of the new collection continuously. It was a handful of us experiencing this in that room but no matter where you were in the world you were invited to take part as the event was being live streamed. Did I mention digital before? Oh yes I did! Plus, the collection became available to buy immediately after the show. Since Jeremy Scott’s first Moschino show after which we all went bananas simply because a-) of his genius collection and b-) parts of the collection were available to buy immediately. I’ve been thinking that will be the future. At this digital age I really don’t see the point of waiting for a collection to drop six months and sometimes even more. Whether you are sitting on the front row or miles away from the catwalk, a few seconds after we all have access to the show whether it being via Instagram or watching it live on ShowStudio. Plus, in a short while Style.com would have every single look available from the show. Then you have to wait for half a year to be able to own something from that collection however if you are lucky you can sometimes buy it a month with a high-street twist on it. Thanks to Versus Versace you don’t have to wait at all.

Anthony Vaccarello speaks the language of our generation and he showed how fluent he is both by his choice of presentation and also with his amazing collection. I will end this article in a truly digital way by copying and pasting the description of the campaign video from Versace’s official YouTube channel.

‘The revolution starts with #VersusCalling. The power of military cut, the provocation of buckles and kilts, the boldness of tartan and the Versus lion head. Discover the Versus Versace FW15 collection under the creative direction of Anthony Vaccarello: versusversace.com #VersusVersace’ YouTube.