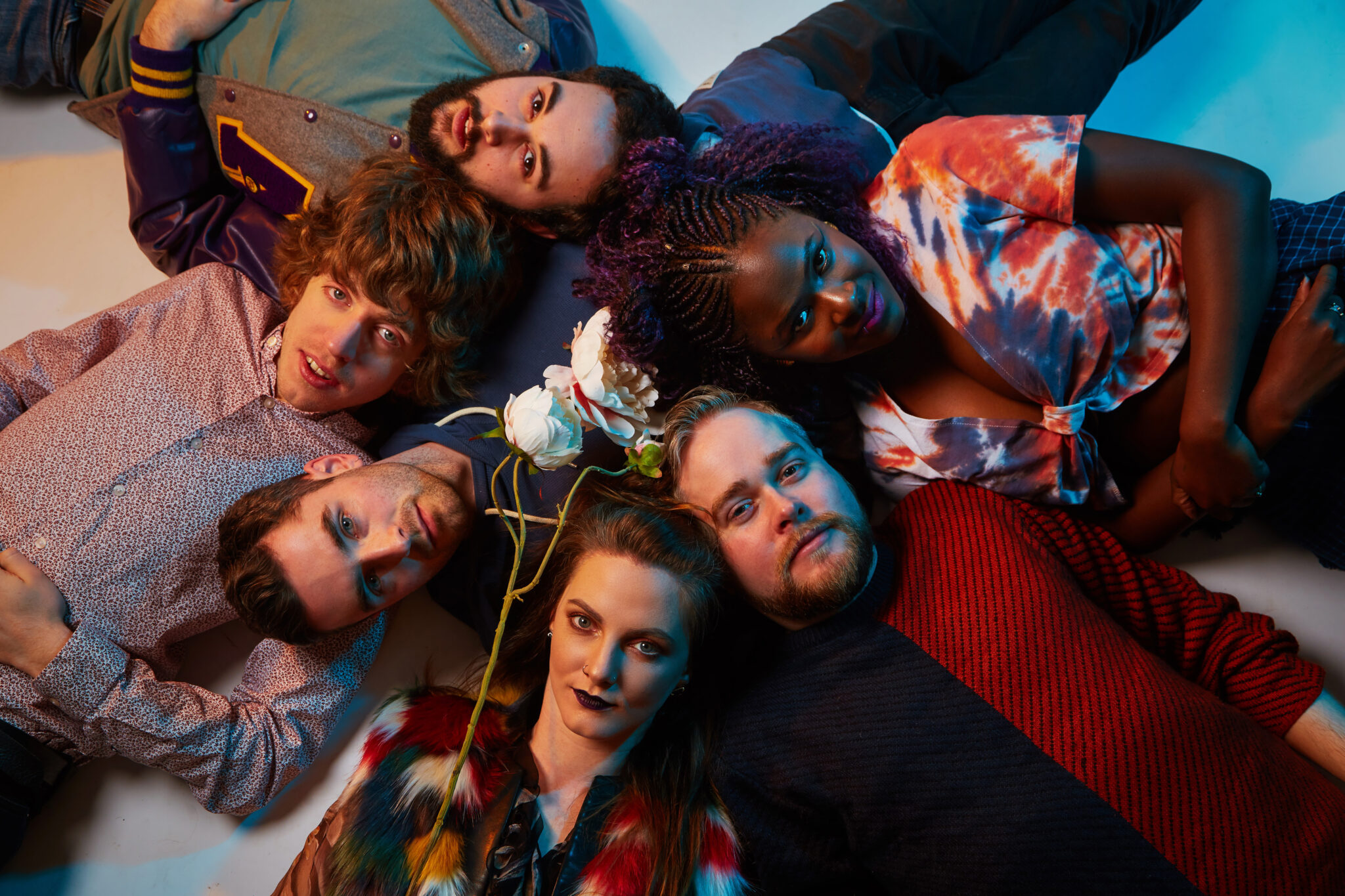 Shookrah is a five-piece, neo-soul, funk-infused band from Ireland, bursting with flavour and international appeal. The group has recently released their brand new single, titled ‘Flex’, an infectious track oozing groovy basslines and jazzy vocal lines that are bound to get you out of your seat and onto the dancefloor. The track is, in fact, about dancing. It’s all about the healthy release of putting all your qualms and inhibitions to the side and letting your body do the talking.

Lead vocalist Senita comments, in a press release: “The song’s braggadocious theme is inspired by the emerging vogue-balls and drag culture in Ireland, specifically in Cork, where I recently stole the Drag-Queen title of ‘Miss Opulence’ at Miss Candy Warhol’s annual event. The song for me reimagines these safely created spaces amongst friends, ripe for invoking your most confident self, and falling prey to the music. ‘Flex’ very much embodies that, you’ve got Nile Rodgers-esque guitar picking contrasted with the devilish call of the synths and bass in the chorus alongside spooky vocals.”

Made up of Senita Appiakorang on lead vocals, Emmet O’Riabhaigh on drums, Daniel Coughlan on guitar, Diarmait MacCarthaigh playing keyboard and Brian Dunlea rocking the bass guitar, Shookrah will certainly not be slowing down or stopping any time soon. In fact, the quintet has many exciting things lined up for 2019, including some new releases and a slew of exciting international shows.

We caught up with Senita and Emmet of Shookrah and chatted about the difficulties of the music industry, writing music and their upcoming tour.

Senita: We’re actually coming up to our 6 year anniversary. I believe our first gig took place in a former venue called The Pavilion here in Cork, on December 13th. It comprised of us (then called Moustache Latté) performing a set of half covers and original tunes that were still taking shape. We came together as a 9 piece collective of friends, wanting to be Ireland’s answer to the new school of neo-soul and R&B that has emerged in the last 10 years. We knew we had soul, a unique slant on it and something interesting or at least fun to say. If anything, it was also a way to get to know each other better and marry the respective talents we saw in one another and have an outlet to performing music we respected but otherwise didn’t see in Ireland at that time.

Emmet: It was when we recorded our EP ‘Clichés’ that we really knew what kind of sound we were going for, what we wanted to write in future, and what kind of gigs we wanted to play. I guess the main inspiration was just making the kind of tunes that we’d listen to –  something with a groove and a hook to make you want to reach for the volume knob and crank the life out of it.

The music industry is super competitive these days, was there a moment in your life that you wanted to give up on music/your band?  How did you manage to stay focused and achieve what you want?

Senita: I think those moments peak and trough really. The very nature of the industry’s competitiveness is kind of interesting to me, because you could give every waking hour of your life to it and still have more to do. You really have to ration out your time and energy to try and create any level of emotional and mental stability for yourself, and that’s something I’m sure every artist in any domain “trying to make it” confronts – or is in conflict with. It’s something I have only recently learned, and am becoming uncompromising with – especially as I assess the effects it previously had on my lifestyle and emotional/mental well-being. I have always tried to keep myself busy with more than one project at a time, it offers me some perspective, some variety and fun. So, I would say I have battled more so with the monogamy of being in one music outfit and feeling like I need to channel every outlet I can to make this a career. I’ve only recently allowed myself to try and just focus on one thing, see it to completion and try and move on from there, rather than expend myself trying to be everything to everyone. I guess I keep on with it cause it’s the one thing that really feels right, but I am also open to the reality that that may change. I may one day become a librarian, and you know what, I can fuck with that too.

Emmet: That moment can sometimes seem like it’s looming over us constantly. There is always doubt and skepticism about the industry, which I think there should be. Someone who thinks they can slide gracefully and swiftly to the pile of gold that awaits them on pure talent alone is a crackpot of the highest order. Nothing comes easy: writing, recording, producing, booking gigs, traveling, promoting, even staying interesting on social media – these are all things that you must constantly stay on top of, and unless that’s your full-time job (for us it isn’t… yet), you’re gonna find it beats you down quite a lot. The main factors that keep us strong are, first and foremost, each other – we spend a lot of time laughing and just generally taking the piss, and secondly we love writing and playing our music. Moreso every day in fact. Sounds cheesy but it’s true, damnit!

How would you describe your creative processes? Who writes the lyrics to the songs? Are the music and lyrics written in conjunction, or separately? Where does the inspiration come from?

Senita: We usually meet twice a week to rehearse and write songs. The guys are good for depositing lil jams in our Google drive and we try to be familiar with them and call which of them we’ll develop live. I would usually have a rough idea at this point of how the mood of the song affects me, but reserve the room for it to play to out live and test out different melodies and themes for it. Lyrically, yes, I write in conjunction with the band, the ideas can come from my personal relationships, reflections, or responses to topical things. ‘Flex’ was one of the few exercise driven songs, I wanted to write about ignoring folks to get my dance on.  Other themes revolve around being a feminist, my familial relationships and friendships, romance and trials therein and also just feeling like I’m coming into my own, especially one tune on the album called ‘Big Bitch Energy’.

Emmet: The genesis of an idea can come from anyone. It can be a drum beat, bassline, chords, vocal melody, whatever. Then we just jam it and expand on it, adding variations and slowly but surely carefully arranging it so that it grooves and has some emotional weight to it. All the while Senita sits quietly with her notebook and usually has a super clever verse and chorus written. It’s almost scary how fast she can write sometimes.

Emmet: Well, the album isn’t out for a few months so I can’t really give away the highlights just yet but I will say that as a collection of songs it is by a country mile the best that we’ve put together. When it gets out into the world, it will be something that we’ll be incredibly proud of. In terms of other artists we’re listening to now, well here’s a tiny sample which we’d suggest people check out: Louis Cole, Anderson .Paak, Earl Sweatshirt, NoName, and then some Irish groups we think need to be heard: Fixity, Sam Clague, Elaine Malone, Barq, The Bonk, Loah, Horse, Kojaque, Super Silly. So many dozens more that are being forgotten here.

Senita: It changes with every season, I find myself listening to one track that has a guest feature from our local compadre GodKnows of Rusangano Family a lot. So I’m looking forward to people hearing that, as well as a new one that we all agree is HOTT- with 2 t’s. I’m listening to a lot of Kari Faux, Gavin Turek, Lauryn Hill again, since recently seeing her, and Fatima’s new album.

Which gig have you enjoyed the most so far? Why?

Emmet: There are a lot of memorable gigs that we hold dear – supporting Theo Katzman on his Irish tour and bringing them down to Dan’s house for a swim in the sea and a barbecue, supporting Billy Ocean on his tour. But I have to say, the last gig we played, which was a hometown gig in a small but amazing venue called Coughlans was a standout. The room was packed like a tin of sardines and it was the most intense response we ever got from an audience. It was really inspiring in particular to see a lot of young people really getting fully into our semi-weird brand of funk/R&B music. It was one of those gigs where the genuine love and connection with the audience made us want to go out and start hugging everyone one by one. But that would have in equal measures both completely impractical and unhygienic given the sauna-esque climate of the room…

What do you expect from your upcoming shows?

Emmet: We’re finalising a couple of dates in London and Sheffield and maybe one more city as well before going on to Berlin. It’ll be our first tour outside of Ireland so we’re really looking forward to it. A couple of us have toured the UK with different bands before so I think our expectations are realistic, which is important – to be under no illusion of grandeur. It’s work – fun and rewarding work, but work. We’ve got loads of friends in all these cities so we won’t be wandering around like absolute losers the whole time between gigs. To have a local guiding us to where is cheap but delicious to eat is key. I like to think the UK crowds will be pleasantly surprised. We’ve had a great response to being featured on the New Music Friday UK playlist on Spotify, so hopefully, we’ve got a lil somethin somethin that the UK will dig. Speaking of which, to stay up to date on gig dates and all that jazz, find us on Facebook, Twitter or our website.