Drawing inspiration from the Semaphore code that was used in early telegraphy to send text-based messages across long distances in visual form from station to station, Pica’s Semaphores series comprises three functioning telegraphic structures in separate locations at King’s Cross.

Members of the public are invited to interact with ground-level based ‘Shutter Telegraph’ on Canal Square inspired by the first optical telegraph invented by Lord George Murray in 1795. Visitors will be able to create messages by pulling ropes to flip the panels on the structure. 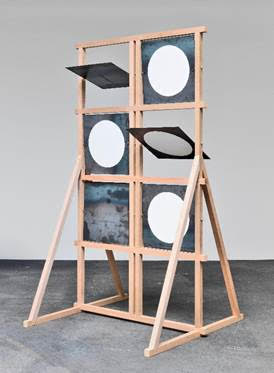 The rooftop sculptures are based on ‘Chappe Telegraphs’ and use arm-like paddles to make signs that correspond to letters. These can be decoded by the public at ground level and reference the early semaphore system, invented in France in 1792 by Claude Chappe.

With bold colour schemes and brightly coloured patterns, Pica’s series of sculptures celebrates the area’s heritage as London’s principal transport hub and its publics, past and present. The modification of an archaic form of communication is timely for an area which has rapidly transformed into a thriving creative and technological district with residents that include Central Saint Martins, Universal Music, Google and Samsung. Adults and children alike are encouraged to interact with Pica’s structures by interpreting the artist’s codes, deciphering the resulting messages and sending their own.

Curator Rebecca Heald says: ‘We’re really excited about Amalia Pica’s response to King’s Cross with this series of sculptures. On an initial site visit to King’s Cross Amalia was struck by how many of the rooftops are visible. Though N1C is a new development you don’t have to crane your neck as in New York or Dubai to see the sky, everything is on a human scale. Her proposal quickly began to develop using the rooftops as a platform. As always with Amalia’s work, interaction with audiences is key and we’re looking forward to seeing how people make sense of and use these new artworks to communicate with one another.’

Project Director at Argent Ian Freshwater said: ‘Inclusive and accessible public art works have been inviting visitors to experience the rich history and cultural vibrancy of King’s Cross for over a decade. The latest in The King’s Cross Project art programme Amalia Pica’s Semaphores sculptures respond to the character of King’s Cross and celebrate the neighbourhoods vibrant past, present and future at the centre of communication and connectivity for London and the UK. We’re looking forward to unveiling Amalia’s works and welcome all to visit the area to enjoy them with us.’

Semaphores is part of The King’s Cross Project, a programme of temporary and permanent art commissions for the buildings and public spaces of King’s Cross. The aim of the King’s Cross Art Project is to make King’s Cross Central a recognised destination for culture. Curated by Rebecca Heald and Tamsin Dillon, the programme supports art that responds to the site as it evolves over time and seeks to encourage innovative and creative new work that build on the important tradition of arts in King’s Cross and the wider community. Commissioned artists to date include Rana Begum, Tess Jaray, Tobias Rehberger and Céline Condorelli.