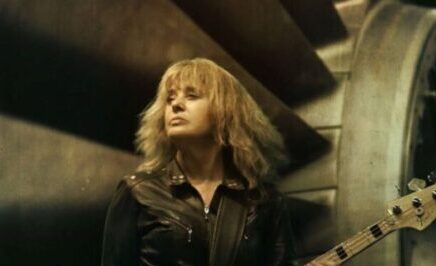 SQ how’s that for a come on line? I wish I had used that line when I was younger!

VP Me too, and I have read that you wanted to be Elvis when you were younger.

SQ Good God yes, and I remember seeing him on TV when I was age six and he was doing the Ed Sullivan show which all our family used to watch. It was Saturday night entertainment, and I was six and my eldest sister was fifteen so she was the right age to scream and she was screaming and I looked at her and I thought what are you screaming at And then I turned and looked at the TV, and I saw Elvis. I dove into the TV and that was the lightbulb moment which is hard to believe because I was so young and I thought I am going to do that. That is the absolute truth, I thought I am going to do that.

VP I know what you mean at that moment everything else melts away and you only see that person and you think that is what I’m going to do.

SQ I just knew it. Don’t ask me how, and it never occurred to me that he was a guy I didn’t think about it, I’m just not gender-conscious. I’m kind of more tomboyish you know, so when you look at the history of my career and how come it was me that came through as a female back then in the music business. You know I was the first one. I think that’s probably the reason because I don’t do gender and I think that I was the type of girl that you needed to break through, somebody that doesn’t do gender. I talk to lots of colleagues, and they never say:’Oh yeah, you were showing us that a girl could do this.’ They just don’t think that. They just said no you were a natural.

VP It’s funny that you say that as you were the first female performer that I saw when I was a kid when I realised that gender didn’t matter and that you didn’t do gender.

SQ No and I don’t know why don’t ask me why it just doesn’t matter, it just wasn’t in my DNA. I don’t do gender, I never have and never will.

VP Yes and that was a flashbulb moment for me as well watching you up there, thinking can you do that? Can you get up on your own like that?

SQ A lot of girls have said that to me that in the documentary ‘Suzi Q’ which is out now a lot of the girls have said to me I can be whatever I want to be and that’s what I’ve given to them and that is wonderful. I think that’s wonderful. VP It is. Now recently on twitter, you recently said you are grateful that your voice is finally being heard. How tough was it to make your voice heard over the years?

SQ I did the documentary and I didn’t want it to be a kind of like oh she’s wonderful I didn’t want a sycophantic look at the history of my career.
I did the documentary to set the record straight. I have always wanted to do a documentary and the director who approached me for this, he said ‘I would like to do a documentary on this but I have got to tell you I’m not a fan.’ So I said okay, fine. Then he said ‘I don’t like your music.’
I thought I like that, and I said why do you want to do it then? He said: ‘Because I saw you on TV and you are fascinating.’
I thought this is the guy. Then I went onto say to him, okay, if we are going to do this project together, even if its a cringe moment when I want to crawl on my hands and knees out of the theatre. Right? If it’s honest it’s true and it’s real. It’s in there. I don’t care how painful it is. So this is what the critics have reacted to that the film is open, raw and honest. It’s exposing you see me for the person that I am and that is what I wanted. Even some of it I didn’t like, but people were saying their truth then I say, go ahead. You were asked a question by the interviewer, I didn’t do the questions, the guy that made it asked the questions, they answered so say it! If that’s what you feel then say it! I’m fine.

VP You are talking about this movie ‘Suzi Q’ that is out now. What is your favourite part of the film and why?

SQ The two moments when I cry. Because it just shows you my soul, and it’s so nice that you can show that in a film. It just shows you, my soul. I don’t want to give the story away. I say what I would have said to myself when I was a little girl. It says the part about my parents, which never fails to reduce me to tears. So those are two real moments but I cry every time I see it!

VP That’s the honesty that’s in there. that’s lovely. Now you have said you will retire when you come on stage, shake your ass and there is silence. That is never going to happen. So I guess you are never going to retire.

SQ (Laughs) It hasn’t happened yet! I have this wonderful album I had out this year called ‘No Control’ I have a single coming from that as you know, called ‘Heart on the Line’ that single comes out on December 6th. With the new album, if you want to know my mantra of living okay, you can listen to the song ‘No soul No control’ the lyrics are: ‘I have got to hold onto me.’ That is how I live my life if you want to know my soul listen to the new single ‘Heart on the Line.’
Suzi Quatro’s new album ‘No Control’ is out now and available at all good online and in-store retailers. Tour dates can be found on Suzi’s official website. http://www.suziquatro.com/shows.html