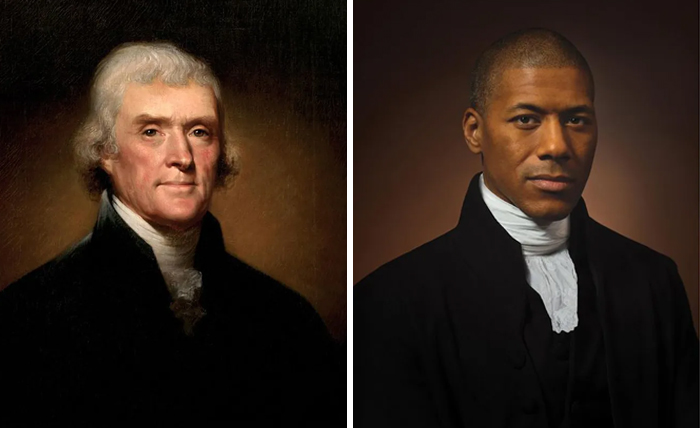 British photographer and photojournalist Drew Gardner recently released the finished version of a 15-year long project. For the past 15 years, he’s been tracking down and reaching out to the direct descendants of famous historical figures – some English and some American. He posed these descendants in portraits mirroring that of their ancestors, and the results are stunning.

The project included sourcing authentic costumes and props, and in order to create backgrounds with painstaking detail. He focused on matching lighting to the original portraits both in the shoots and in post-production, using a wide variety of camera and editing equipment to do so.

Some of the notable Englishmen he chose include Napoleon and Charles Dickens. Across the Atlantic, he added Thomas Jefferson, Elizabeth Cady Stanton, and Frederick Douglass. He included American historical figures largely because he wanted to showcase that America’s history is not just “white and male,” according to the Smithsonian.

“For all its travails, America is the most brilliant idea,” he told the Smithsonian in an interview.

Gardner also mentioned that one of his biggest challenges was finding prominent women from centuries ago that also have descendants. “If you achieved anything as a woman, you didn’t have kids,” he stated.

Shannon LaNier, descendant of Thomas Jefferson and Sally Hemings, is a TV news anchor, and co-authored the book,  Jefferson’s Children: The Story of One American Family.

LaNier told the Smithsonian, “My ancestor had his dreams—and now it’s up to all of us living in America today to make sure no one is excluded from the promise of life, liberty and the pursuit of happiness.”