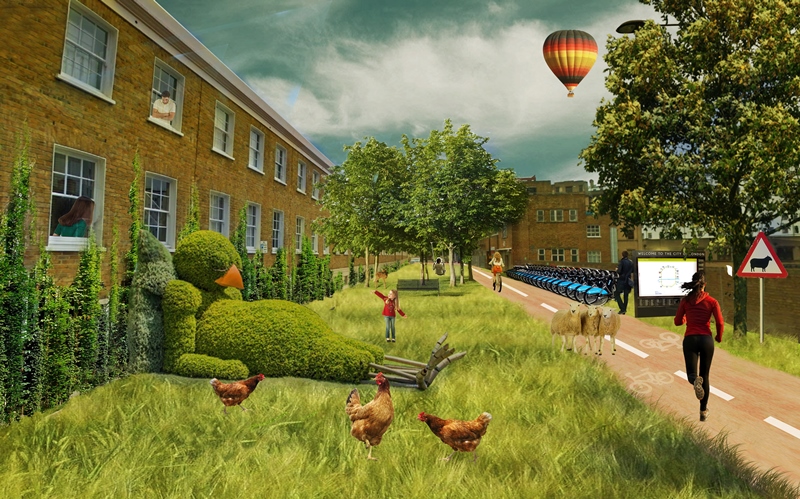 Visionaries imagine what a London National Park City could look like

A giant green loop of meadows and trees encircling central London, nature-friendly streets, a network of green buses and an app that connects all Londoners to the capital’s “living network” – all ideas that have won a challenge to imagine London as the world’s first National Park City.

Artists, designers and architects were invited to imagine and visualise what a future London National Park City could look like in a design challenge set by the newly established National Park City Foundation. A panel of judges reviewed over 50 entries from around the world and picked four winning visions.

Making London a National Park City is a large-scale and long-term vision that has the potential to improve life in the capital by making the city radically greener and connecting more people to the city’s remarkable  heritage.

All Londoners can both contribute to and benefit from London becoming a National Park City as these winning entries show.

Landscape Architect Andrew Grant said “Here are a set of ideas that would make us all think differently about London, about the quality of life we wish to lead and the importance of nature in cities. These are ideas that would translate to every town and city in the world and would make London a global leader in restoring the broken links between people and nature.”

Created by Siân and Jon Moxon, Rewild my street is a simple idea with enormous potential. Take a typical London residential street; adapt its terraces, gardens and streetscape to transform it into a haven for wildlife by adding wildflower meadows, patio ponds, bird feeders and insect hotels – and watch the wildlife return in droves. With 3.8 million gardens covering 24% of the capital, the impact would be huge if everyone did this. Siân is a Senior Lecturer at the The Cass School of Art, Architecture & Design and Jon is an Architect at The Pattern Project. 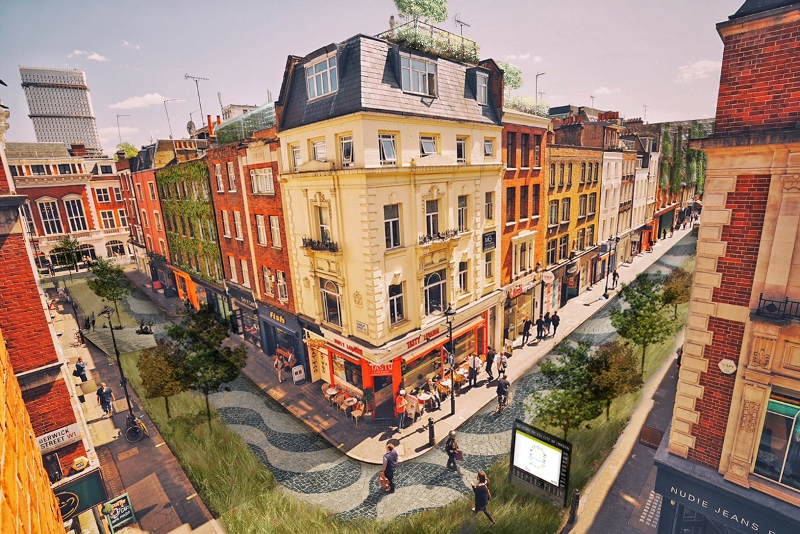 Conceived by Chris Rossetto and Emma Lubbers in the Netherlands, The Trail would be an uninterrupted garden path of peaceful green spaces, winding through inner London’s iconic neighbourhoods and linking its parks into a single continuous woven landscape. ‘The Trail’ contributes an additional layer to London’s transport network, and re-imagines how Londoners move around the city. Less about speed and efficiency, the Trail promotes a more relaxed journey, healthy recreational activity, quality green spaces, and improved air quality.

A large-scale idea from a team at London architects Farrells, the Living Network sees the National Park City as being made up of a rich variety of different green spaces including private gardens, parks, waterways and the entire green belt. The Living Network would formally combine all of the environmental layers of London into one single green infrastructure network so that Londoners can better discover, learn from, protect and grow green city environments. The Living Network would accompanied by an online platform, including an app and website, into which all Londoners can explore and upload information about their green spaces. 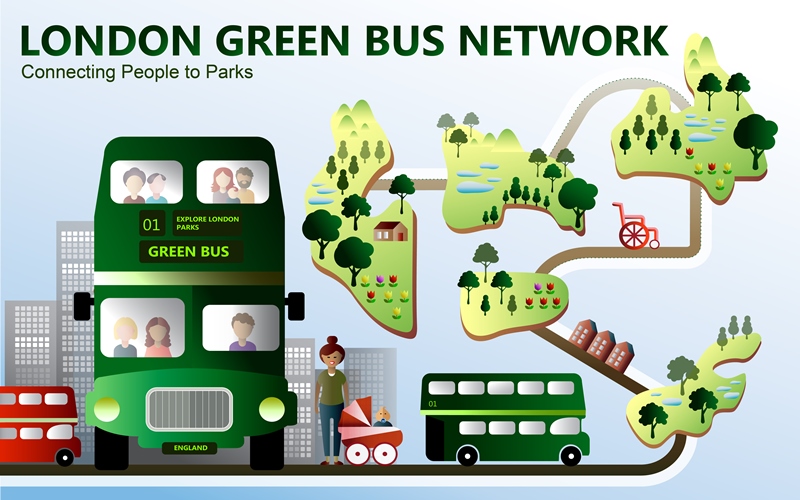 Envisioned by Anne Frobeen, a UK-based designer, the London Green Bus Network would have routes specifically designed to help Londoners access and enjoy a greater variety of green space across the city and beyond. The buses themselves would visually highlight green connections in the city and physically make it easier for a wider range of people, ages and abilities to get out and explore.

Entries were reviewed for how well the vision embodies the spirit of the National Park City, how inspirational the vision is and how replicable or scalable it is. The judging panel, which included landscape architect Andrew Grant, author and journalist Will Self, and Gemma Ginty, Urban Futures Lead at the Future Cities Catapult also selected three highly commended entries.

Developed by Landscape Architect Dimitris Grozopoulos, the Blue Line is a strategic proposal for  Nine Elms that could be scaled upto the wider city of London, using existing railway infrastructure. Through small and medium scale interventions and the concept of ‘urban acupuncture’ the proposal seeks to improve water management and enhance biodiversity. Taking into consideration the historical context, local heritage and environmental necessity, the ‘Blue line’ invites the local community to engage with and celebrate water in the public realm through a series of pocket parks with water as a joining artery.

Urban Planner and Landscape Architect Loredana Micu entered a vision for strong integrated system of green areas, public spaces, communities and administrations for part of Hackney in east London. Using this sample of London as a case study, Loredana has drawn a picture of how all areas of London could be integrated. The proposal looks at creating focal points, connected through quality public nodes and routes. It includes improvements to existing green and public spaces, creating new spaces and developing a system of community and educational gardens.

Loft Gardens uses the opportunity presented by London’s underexploited roofscape to create diverse new green spaces and increase the availability of outdoor space for Londoners, including those who live above the ground floor. Loft Gardens could be used for vegetable patches or beehives; and could, for example, alternate down a terraced street, providing vitality and biodiversity to new and existing housing stock, as well as enhancing health and well-being and improving air quality. This idea comes from Studio Octopi, an architectural firm best known for proposals to re-build Peckham Lido and to create a naturally filtered floating lido in the Thames.

Other notable entries focussed on the River Thames, including a plan by Andrey Kostanda and Denis Makarenko for a moonway trail along the River Thames foreshore that is only accessible at low tide and a design by Lottie McCarthy to turn Hungerford Bridge’s neglected landing platforms (often used as a skateboard graveyard) into inspiring pocket parks. Judges were delighted to receive entries that ranged in scale from Gabriella De Rosa’s beautiful clothes that include living plantlife in their fabric, to Studio Engleback’s detailed, whole-system and biophilic approach to London’s entire landscape.

Winners from the competition will be invited to present their ideas at a special event that is being planned for later in the year.

Find out more about the winners at http://www.nationalparkcity.london/imagine