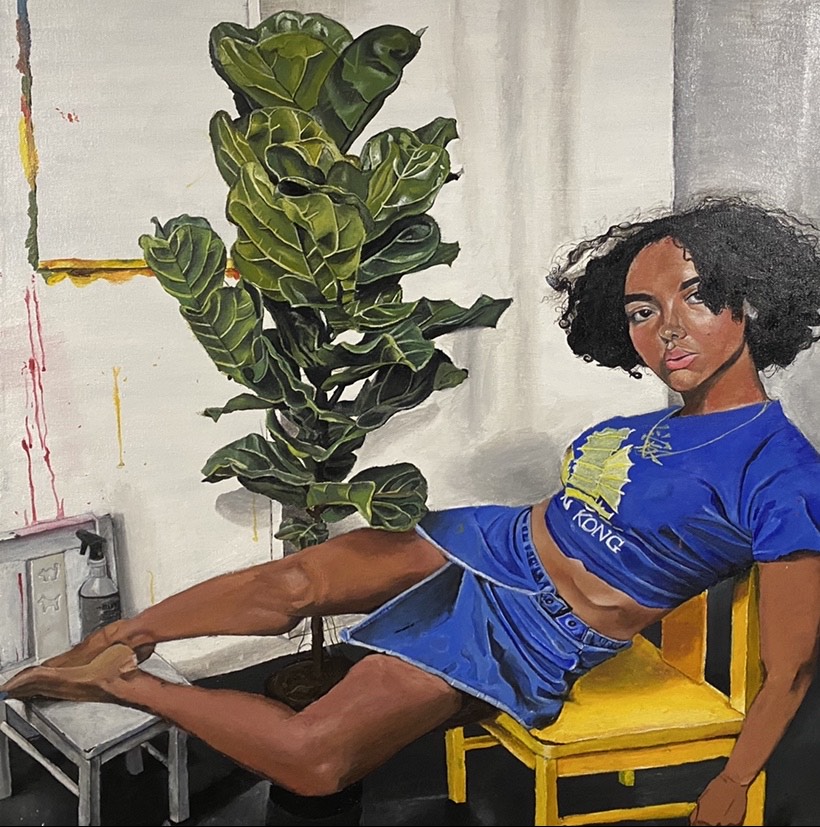 Winners of the Next Big Thing Announced.

The ten winners of Next Big Thing have been announced, along with the winner of the ‘People’s Choice’ in which 40,000 votes were cast.

Over 300 entries in Portraiture, Photography, Street Art, Sculpture, and Landscape were submitted by extraordinary and inspiring young Londoners. The winning artists will be filmed for the new series NEXT BIG THING, airing on London Live from 28 February 2021, as they create an original piece of work which captures the ‘Spirit of London’ – highlighting this richly diverse and international cultural society. The final works will be showcased in a prestigious central London exhibition and revealed to a global audience in an online auction.

James Nicholls, Presenter of Next Big Thing said: “It’s been extraordinary to see the breadth and diversity of entries.  The best of London’s young creativity is captured by the entries – they are testament to London’s diversity and how that inspires extraordinary creativity.”

The competition was open to all artists aged 17 and 30 who live, work or study in London. The fourteen judges were struck by the breadth of entries.

The winners are (in their respective categories):

Rayvenn is a digital sculptor, writer/researcher and curator. She explores the digital hybridity of sculpture, exploring the nuances of identity that pivot between hyper-visibility and invisibility, and offers a (re)imagined collective perspective. Her work chronicles the elevated reframing of black anatomy – unencumbered, in traction – mediated between three-dimensional processes alongside a handmade aesthetic within an extended analysis of ‘Objecthood’.

Vanessa is a self-taught visual artist, fine art and documentary photographer from Lagos. Fine Art photography is her chosen medium, bringing her portraits to life using a lot of colour. Her individualised portraits obscure the tales that lie beneath the blindfold, questioning the role our eyes play in offering a glimpse into the depth beneath the preliminary facade.

Bel is a recent BA Fine Art graduate from Newcastle University. She is inspired by chaos and human nature, and in the relentless spin of our modern world. Bel’s abstracted worlds allude to the ongoing conversation between technological revolution, and the contemporary mind – in its intensity and absurdity.  Working mainly in oils, her imagery is largely impulsive and entirely from her imagination: the results are dreamlike and multi-layered.

Wesley focuses on representing the overlooked spirits and stories of black figures. Based in East London, Wesley uses portraiture to critique the historical norms presented within art. This unfolds as he explores ideas around identity as it pertains to the contemporary black experience.

Kieran is a land and cityscape oil painter, working only with a palette knife to create paintings with many layers and built-up texture. He is inspired and intrigued by the beautiful architecture in London, especially the juxtaposition of new and ancient landmarks. He uses accents of intense colour to draw the eye throughout his paintings, which would otherwise be muted London colours.

Joshua’s work explores perceptions of racial and cultural identity, racism and stereotyping in Western art. He grew up in and trained in England, and his work is significantly informed by Ghanaian culture alongside black artists and voices. Joshua aims to tell a story and offer his audience a different and personal perspective, in an open and relatable format, regardless of their background.

Elyssa Sykes-Smith is an award winning artist and researcher working in site-specific sculpture, installation, performance, socially engaged projects, education, and public art. She aims to distil complex, psychological states into multisensory experiences. Playing on the divide between the abstract and representational, her work is designed to intrigue the viewer. Her sculpture responds to a site and brings to life a dynamic relationship between audience, artwork and environment.

The People’s Choice winner is Tanya Harrison – Tanya’s culturally diverse background (English, Turkish, Indian, Czech) influences her artistic expression. She works as a primary school teacher in Barking, and is enthusiastic about helping shape the artists of tomorrow. The works her pupils create help her to look at art for new perspectives. Tanya sees the impact art can have on communities, even when opportunity is limited, and the potential transformation brought by art on a larger scale.

Harry grew up surrounded by animals and always felt a deep affinity with wildlife. He spent much of his childhood immersed in Attenborough’s iconic series about the natural world and his trips to see these animals in the wild cemented the importance of protecting these creatures for future generations. Harry seeks to use his work to capture the beauty of the wild, but more importantly drive reflection and change.

Frank is a multimedia artist and designer working with poetry, murals, graphic design, illustration and projections. Her work primarily focuses on uplifting, empowering and connecting people whilst shining a light on social, political and environmental issues, and aims to encourage reflection and positive change.

Palo is a London based artist who recently started painting on old boards and other finds around the streets of East London. Trained as an architect, he found and developed his passion for street art while furloughed in the pandemic. Catching the attention of passers-by, he has since carried out numerous commissions, and looks forward to taking on some big walls.

As well as the chance to exhibit and sell their work, the young finalists are being supported by renowned artist/mentors who will offer guidance, advice and encouragement in their respective category.

Next Big Thing will air on London Live in Spring 2021.