‘Clear history from the beginning of time’

Bonty went to the local offie in his lemon yellow sweatshirt. He’d worn it to bed last night so it was ready to wear straight out today. A chilly sunny day in Hoxton, you could hear the haunting laughs of a playground somewhere nearby.

The offie was one of those barren places endorsed by The Sun, with birthday cards by the till and a sun faded sweet dispenser outside. It always felt like 3pm in there. Bonty went inside, naturally anxious.

He’d been going here for over 2 years, saying hello to the man at the till and never once bothering to get to know him beyond that one word. He hated him in a way and didn’t know why.

Bonty was an odd guy – odd, without being fascinating – with more hands than strands of hair on his head. 38, never married, rarely kissed, his time was mainly spent at home clad in tracksuit bottoms. There he’d devour the hours pinging messages to Instagirls and clogging up his phone with filthy selfies. He only left his nest when he absolutely had to. Today was one of those days.

He looked around the shop browsing the minimal selection of goods – most of them from multipacks now being sold separately. Stitched to the front of his head was an eerie hollow smile, like a mask from a goofy joke shop, he wore this as soon as he left the front door of his flat, removing it as soon as he got back. It made him palatable, but also terrifying.

“What did I come here for?” Bonty whispered to himself.

He scoured the shelves but he couldn’t, just couldn’t for the life of him, remember why he’d come. “I’m baffled!” he cried. The cashier half laughed cracking his knuckles. He tried to guess for him.
“Baked beans? Toothpaste? Brylcreem?”
“No, no, no.”
“Bananas? Coffee? Cigarettes –”
“Sssshhhhhhhhhh,” interrupted Bonty.

He drifted over to the crisps, picking up some Monster Munch. He could feel the pickled onion sting inside his palate. His eyes widened, his mouth watered. ‘I like snacks,’ he thought. He turned to the cashier. 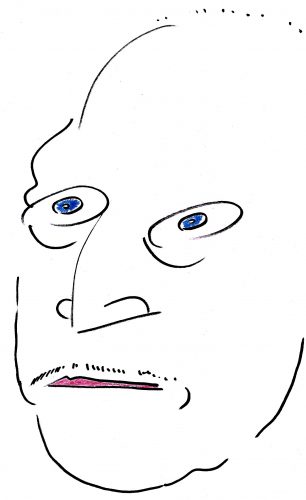 He put them back knowing he hadn’t the money for luxuries like Monster Munch.
Dismissing the vegetables with glazed eyes he scanned the magazines hoping his memory would do its fucking job.

“Do you have any of your ‘Happy’ deals?” asked Bonty.

The cashier pointed to the corner with the hand cut fluorescent sign. ‘£1 and under’  it read with a primitive smiley face scrawled in black marker. He felt like crying as he saw samosas, dented cans of pop, nibbled carrots, shrivelled figs and other out-of-date stock. None of this was what he had come here for.

The cashier remained silent, he hadn’t said a word for many minutes now. Bonty was starting to get worked up. His eyes clouded over as he scanned the dusty files in his mind. He then slapped himself hard across the face. ‘Why am I here?!!’ he asked his brain of vegetable.

Wiping the tears from his face he smiled to the man at the till who wasn’t even looking, then began whistling to convey a sense of relaxation and calm.

“Ummm,” he began weighing up a question, now leaning against the fridge of drinks “… do you have any Milky Buttons?”
“Get the fuck out,” said the cashier.
“Oh god,” said Bonty, “really?”
“Yes, definitely.”

Bonty left immediately. He stepped onto the beige pavement with a skull full of unthinkable thoughts. What happened there? The Hoxton sun wasn’t as enjoyable now, and the beauty of the day irritated him. He looked down at his laces that he’d tied only 30 minutes earlier. They were double knotted.

Back to his flat, he was playing over the event in his head. ‘I went in there for something’ he thought, ‘but it wasn’t for him to tell me to fuck off. Or was it?’ He really couldn’t remember. Meowing away on the couch was his little kitten. It was one of those bald felines that looked like a moving bag of genitals. Bonty stuck his middle finger up to him then made his way the bog.

He sat on the toilet, relaxed his sphincter and released the bile of the day back into the world. Unearned euphoria danced through his guts. It was then that it struck him: bog roll. It was bog roll that he needed.