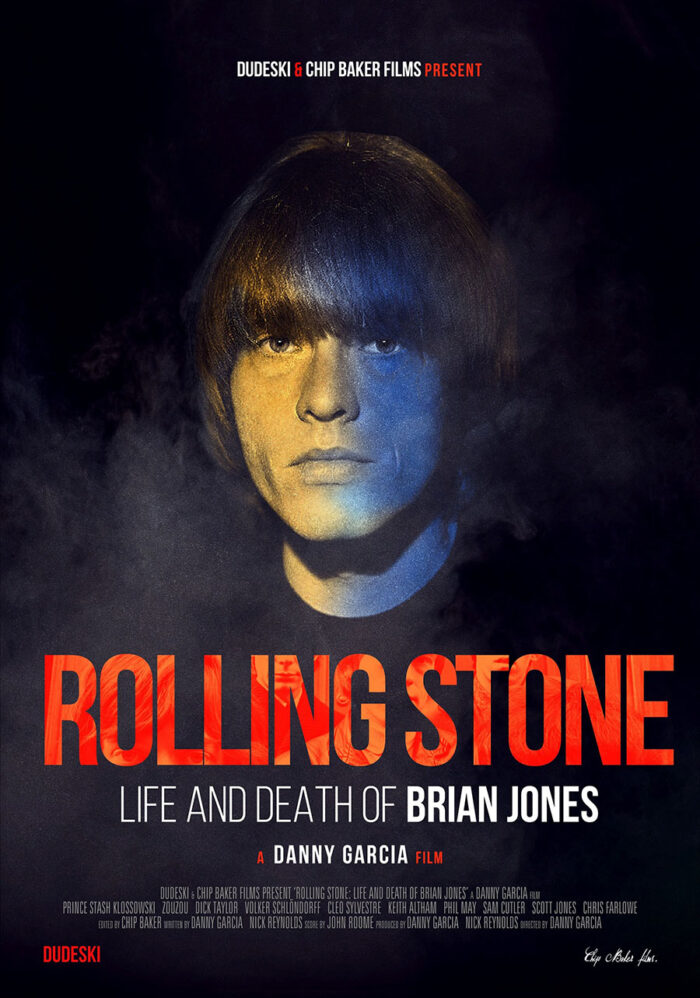 Interview with Danny Garcia writer and producer of ‘Rolling Stone: Life and Death of Brian Jones’

VP: I am intrigued by your recent statement ‘No Jones No Stones’ in your research for the film how did you reach this conclusion?

DG: I never said that but that is something that people say ‘No Jones No Stones’ basically because he was the man that brought the band together. He was the man who put out the advert in ‘Jazz News’ that was 1962. Brian was playing on stage with Alexis Korner at the Ealing club sometime in 1962. Around that time actually because by the summer He invited Mick, Keith and Mick Taylor? attended one of those shows as a guest slide guitarist with Alexis Korner and they freaked out basically because they had never seen anything like it live on stage. So they approached Brian and invited Mick to sing with him but Mick already had a band with Keith and Mick Taylor and they were called ‘Little Boy Blue and The Blue Boys.’ It sounds like Spinal Tap!

DG: Yes so Mick came with the package and Mick Taylor accepted to play the bass and so for the first few months Dick was in the band until he quit to form ‘The Pretty Things’ so that’s how the band was born and so that’s why people say ‘No Jones No Stones’

VP: What did you find out about Brian Jones character during the making of ‘The Life and Death of Brian Jones?’

DG: That he was a rascal!

DG: Yes I love the guy just because of that you know? There were so many sides to Brian he was insecure we found this school note saying he suffered from an authoritarian father and so he had to show off to compensate. That was the key with Brian he did not have a good relationship with his parents. All of his traumas like everybody else’s stem from his childhood so he was a very peculiar character. He had many flaws as well as many great things you know.

DG: Yes of course and eventually the old man got a lot of money from ‘The Stones’ because of Brian when they signed new deals or when they finalised their deal with Apple and with Allan Klein they were awarded some money and you know the old man got paid because of Brian. So you know he shouldn’t be that mad. Cheltenham was a very conservative town with a lot of stuff going on behind closed doors there are all these intelligence agencies, military compounds and Brian’s father was an aeronautical designer something like that. They were building planes over there. So there is that side and then there is the party side because all these people have got to go out and have fun So there was all this scene of all these children born out of wedlock which is how Brian started at seventeen. That was when he had his first kid. It was a girl. A baby girl. Because he had an affair with a married woman. Do you see what I mean? It was very conservative on one side but the other side was very depraved!

DG: I don’t understand why Brian’s parents were so uptight about him loving jazz music he had been trained classically. He learnt how to play the piano and clarinet and then he discovers jazz and falls in love with Julian Cannonball Adderley that was his hero. That’s why he wanted all his children to be called Julian and he has twin sons called Julian. His parents were opposed to him playing jazz. I don’t know if it’s because he was straying away from classical training. Or if it was racism. His father says that was a source of great anxiety I mean that how uptight his parents were. Then there was also the drama of him losing his two-year-old sister when he was a little kid. There was a lot of drama in that household you know?

VP: It seems like he had such an uptight childhood that he had to go crazy later on to reverse the experience.

VP: Yes I understand. Did you interview any of the Stones for the film and what did they say about Brian?

DG: Besides Mick Taylor no. Same thing with Bill Wyman because he was working on his documentary.

VP: Why was Ian Stewart known as the sixth ‘Rolling Stone?’

DG Ian was the original pianist in the band. He was the first one to reply to Brian’s advert in ‘Jazz News’ and he started the band with Brian Andrew Loog Oldham signed the band and he became the Manager/Producer. Ian Stewart remained an important part of ‘The Stones’ for some time.

VP: Brian had an ‘overdoing’ attitude what created this?

DG: They were all doing a lot of pills during the mod days. Brian was no different and he always had a lot of people coming around with lots of pills for Brian you know? So there was no shortage of amphetamines. So you mix that with alcohol and you have got a time bomb ticking.

VP: It makes you wonder who the real person was because most of the time he was on drugs and drink so was that him or not?

DG: There were many many different sides to Brian excess, success all of those things. They are not easy to handle for a twenty-four-year-old kid we could never know what it’s like to be in that position. It’s hard to fathom Brian was on LSD for a while daily there is a lot of stuff written about him and his partying ways from Tony Sanchez you know ‘Spanish Tony’ up and down with The Rolling Stones.

VP: He was just a kid when you think about it.

DG: His journey starts when he forms the band and he was twenty-seven when he was fired and then he dies.

VP: It’s incredible to think of so much being packed into such a short space of time.

DG: We have photographs of him at seventeen ten years before he died so you can see in the film how he changes in front of you. How all the touring, and working and drug-taking and drinking and the partying
takes its toll on a twenty-something-year-old kid.

DG: The investigative journalist Scott Jones was involved in the actual Brian Jones police files using the information so he is the only reliable source of what happened that night and he was kind enough to sit down and tell us exactly what he learned after years of studying those documents. He then proceeded to present a 600-page report to Sussex police in 2010. He tried to get them to reopen the case and they were interested at first and then they shut it down. Despite the report, we are not interested. So basically the same cover-up that was put in place in 1969 is still there. It’s a seventy-five-year-old rule. Some pages were missing You didn’t get the full thing. When the police got there they were just doing their job they were doing what a policeman is supposed to do when something like this happens and then the top brass shows up and says well this is not what happened this is the story this is what we are going to tell the press and that’s it. The government used Brian’s death to make a poster against drink and drugs. That is the picture we have been missing all along. We discuss his death in the film how it happened and how it went down. It’s not what we have been told. People talk about stuff that they don’t know because they haven’t seen those documents maybe they spoke to a builder that was there or something. The actual three people who according to the police six or more people were hanging out and the final police report mentions only three people so there were probably more people before the cops showed up more people left the party in a rush when they had seen what had happened with Brian. There were claims of cars leaving at high-speed tyres screeching and all of that. So when you put it all together you can imagine what sort of scene it was. It was a little party and the builders had been fired that same day but they decided to hang around, okay let’s make the most of this and drink all of these drinks and party tonight. Then there is an argument and then this guy dies and then we are sold a story.

VP: Why do you think The Stones didn’t go to his funeral?

DG: They were not invited. Brian’s family did not want that publicity.

DG: That’s why only Charlie and Bill showed up because they were the only ones that hadn’t been busted. The police were not worried about Charlie and Bill the police wanted Mick Keith and Ronnie. To give the kids some example. These drug addicts are not a good example for you kids.

VP: Yes I get it. The example was made of him.

DG: That was the policy of the time that is what the governments were working

on to destroy the pop stars.

VP: They constantly hounded him as well following him around trying to set him up

DG: Sergent Norman Pilcher was known for that for planting evidence. The Chelsea drugstore and he was convicted in 1973.

VP: Yes because he would get all these rock stars I’ve got another one!That was how he made himself famous.

DG: Yes they called him the ‘Groupie Cop’ Because he went after John Lennon Yoko Ono George Harrison Brian Jones a few of the top swinging London faces and he was hustling all of them.Where can people see the film now?

DG: It’s in cinemas right now and by mid-April, we should have the DVD release and the DVD contains over an hour of extras with 57 minutes of deleted scenes so that’s almost like another movie.

VP: Thank you for talking to me

DG: You are welcome.