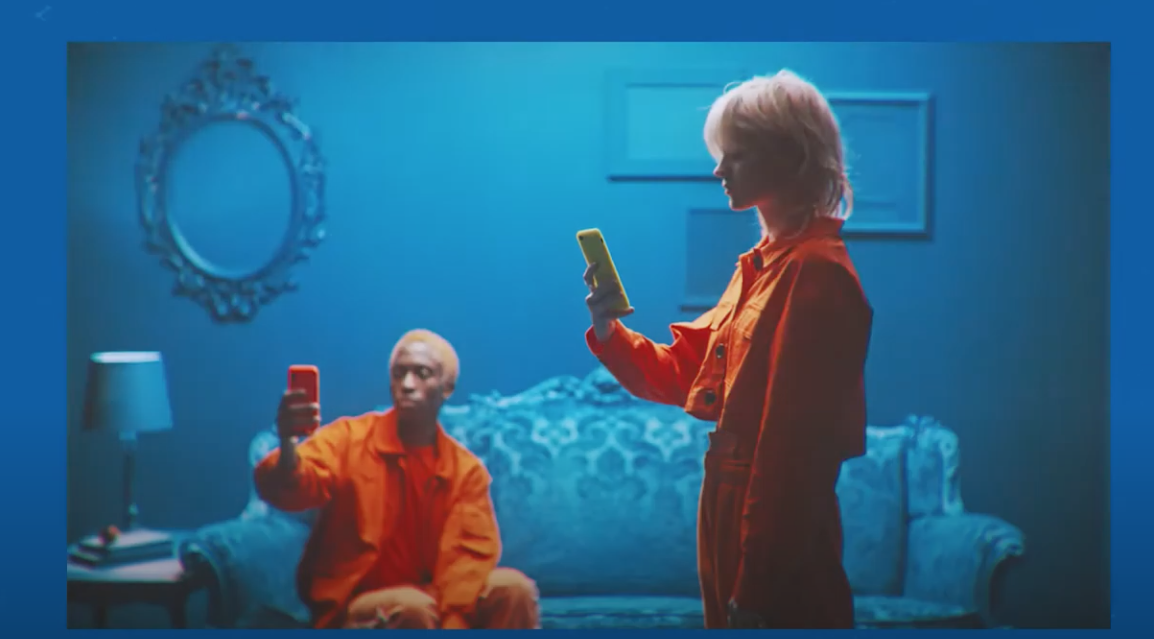 Platinum hit producer Taelor Deitcher aka Felix Cartal and Sophie Simmons share the video for their single, ‘Mine’. Premiered via Vancouver Sun, the music video has an impressive team behind it with Marc Webb (The Weeknd, Chevy, Vodafone) as director and Carlee Wallace (whose client list includes Teen Vogue, Marie Claire US and Billboard) for concept, styling and production. The music video provides a hyper-stylised social commentary on a couple caught in mundane tasks with bold, block colouring and is filled with quirky energy combating mindless repetition.

The music video showcases the beauty and pain of remembering past lovers and relationships, in bright block colours and distorted daily scenes. Visually and audibly embodying nostalgia, we are shown a couple bound in monotonous tasks in an amplified environment having created their own unanimous rhythm within them. Specific and deliberate household acts are contrasted with more romanticised footage of the couple on a beach. Shots of Sophie Simmons break up the series of strange scenes that bring a more natural element to the video, providing reprise. Her clear, honeyed vocals and the light production style play well into the video with the neon fabrics tying in a more traditional “pop” element.

Speaking of the music video, Felix Cartal tells us: The ‘Mine’ music video is a highly stylized interpretation of past lovers and relationships. What often seems mundane and diminished at the time, can become some of the larger things that you cherish most from a previous relationship. The closing scene of the chairs facing opposite directions represents how close you can feel to someone while also being apart. I’ve been obsessed with colour blocking videos, influenced by a lot of the Tyler the Creator and Billie Eilish stuff, I wanted to amplify that vision in my own way, and Carlee Wallace (Art Director) really helped take it to that direction.”

‘Mine’ premiered via Wonderland Magazine as well as the tastemaker Youtube channel MrSuicideSheep. Felix Cartal has collaborated with Kaskade on ‘More’ and R3HAB on ‘Killing Time’ and done official remixes for the likes of Selena Gomez, Zedd, Galantis, Dillon Francis, MØ, Ellie Goulding and Diplo. With over 1.96 Million Spotify monthly listeners and over 200 Million Spotify plays and counting, the DJ and producer has been featured by major Youtube channels Trap Nation, MrSuicideSheep, MrRevillz, Chill Nation, Selected, xKito amongst others accumulating over 87 Million Youtube views. He has also seen support from BBC Radio 1’s Danny Howard and Diplo and Friends and SiriusXM Chill has also heavily supported several singles, while his Weekend Workout radio show is also featured on SiriusXM Diplo’s Revolution. While Felix Cartal is from Vancouver, he has previously lived in Glasgow, where he “first started DJing and learned to drink whiskey.” As a result, his sound sits close to those of the industry greats of Avicii, Kygo and Calvin Harris.

Los Angeles born Sophie Simmons’s single, ‘Black Mirror’ debuted on Billboard’s Dance Club Songs chart at Number 43 and remained on the list for ten weeks, peaking at Number 20. She has been featured in tastemaker publications such as Vanity Fair, Billboard, YourEDM, and Cosmopolitan.